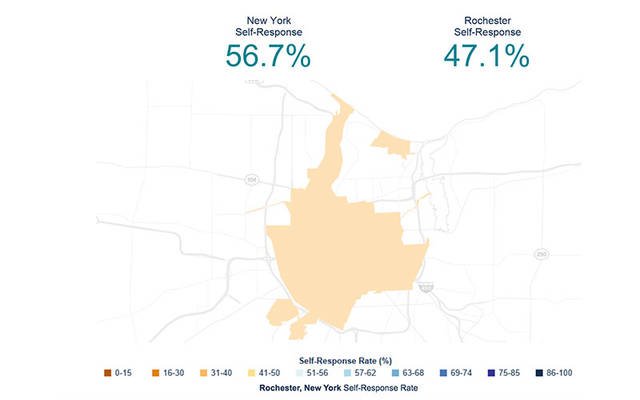 While the pandemic temporarily suspended such 2020 census activities as door-to-door delivery, the U.S Census Bureau has continued to share the message of how important completing the census is by using alternative methods of information distribution and advertisement.

“When we think of where we’re at right now in this time of COVID-19, I can’t think of an easier way for people to support their communities then by filling out their 2020 census,” Jeff T. Behler, director for the Census Bureau’s New York Regional Office, recently told El Mensajero Católico.

This is the first year the census can be completed online and by phone, which makes it perfect for this time of social distancing, Behler said, adding that individuals also can respond to the questionnaire by mail.

According to Behler, the U.S. Census Bureau has been encouraging people to respond to the 2020 census through these three self-response methods in light of field operations being temporarily suspended because of the pandemic.

The suspension of field operations also meant the bureau’s numerous Complete Count Committees — community partners committed to raising awareness about the census — also had to suspend activities intended to highlight information about the 2020 census.

“We were planning on capturing a lot of this (community awareness) just during our walk-in traffic at the different organizations like Catholic Family Center or Refugees Helping Refugees, and then COVID happened, and that became a game plan we can no longer do,” said Jim Morris, vice president of family services at Catholic Family Center, which participates in the census as a Complete Count Committee.

Morris was in charge of the New Americans group, a subcommittee under CFC, which was organized after members of the City of Rochester’s Complete Count Committee asked CFC last year to form a team that could distribute 2020 census information to refugees and immigrants in the Rochester area.

The Census Bureau considers these populations hard to count or reach, said Morris, which is why the city asked CFC to create the subcommittee, since the organization works closely with both immigrant and refugee communities.

Although connecting with hard-to-reach communities is difficult, Behler told El Mensajero Católico that the biggest challenge is working to move individuals from thinking about census self-response to the action of completing it.

This challenge is being tackled by the 2020 Census Integrated Partnership and Communications team, a program that was developed specifically for the 2020 census to increase awareness of and participation in the national survey. The idea derives from past experiences, indicating that communications and partnerships are crucial in educating the public to maximize survey response rates, said Behler. This challenge was present prior to the pandemic, which is why such census partners as Complete Count Committees were established, he noted.

Since the suspension of in-person census operations, both the 2020 census staff of the New York regional office and its cohort of partners have had to find alternative and creative methods of distributing information.

“We’re using social media campaigns, advertising campaigns and working with local partners,” Behler said. “The focus is really on how can we reach people right now and then what can we do in the future.”

For example, there was a 2020 census Digital Action Weekend that took place from May 1-3 that utilized the hashtag #2020Census to drive people to the census website (https://2020census.gov/en.html) in order to complete their questionnaires. The digital action weekend also coincided with a national video challenge, Get Out The Count, a competition to reward 2020 census-related videos with the highest visibility and the highest impact.

The New York Regional Census Center also challenged individuals in its coverage area to design a mascot that was representative of all of the region’s states and territories — Connecticut, Maine, Massachusetts, New Hampshire, New Jersey, New York, Rhode Island, Vermont and Puerto Rico.

Via newsletter May 15, Behler announced the winner, a three-person team from Boston that created Abeja (Bee) to convey the census messaging points — “Bee Counted, Bee Safe, Bee Great, Bee You!”

According to Behler, there also was a partnership with Rochester’s Regional Transportation System that included advertisements for the 2020 census featured in 100 buses serving Rochester.

The 2020 census team has even worked with Monroe County Executive Adam Bello and Rochester Mayor Lovely Warren, who hosted numerous press conferences and information events in regard to the importance of completing the 2020 census, Behler said.

However, as a result of the pandemic, much of the city’s public-education and outreach campaign plans regarding the importance of the census were disrupted.

On May 8, in anticipation of reopening in the Rochester area, Warren announced in a press release that nearly 96,000 homes would receive masks from the Monroe County stockpile for a total distribution of nearly 480,000 masks. The packets containing the masks also contained information regarding community resources to help people impacted by the ongoing pandemic, as well as information encouraging residents to complete the 2020 census.

“The pandemic has stopped many people from focusing on the importance of the Census to our city. We will deliver the message loud and clear that our residents need to step up and be counted. Each person who completes the 2020 Census means Rochester will receive $26,000 more each year for things we need like health care, education and emergency services,” Warren in the press release.

Behler recommended that individuals interested in learning more about the allocation of federal funding look at the Counting for Dollars study provided by The George Washington University. The study provides information on the 55 largest federally funded programs and how much money came into the state by program.

Prior to 2020 Census Day April 1 — a reference date indicating the survey when completed should include everyone living in the home as of that day — Rochester had a response rate of 25.2 percent on March 30, while the state’s response rate was higher at 31.1 percent, slightly under the national response rate of 36.2 percent.

On May 18, the U.S. Census Bureau announced the resumption of its Update Leave operation in 14 western New York counties. The operation takes place in areas where the majority of households do not receive mail at their physical addresses, thus census workers hand deliver census materials.

“So, we don’t mail questionnaires or invitation packets like we do with 95 percent of state households who receive their invitation via mail,” said Behler. “That other 5 percent we either hand deliver, or we enumerate them right at their door.”

Field staff had begun hand-delivering census materials prior to the suspension of all fieldwork for this operation on March 15. According to Iven, most households received their census invitations by mail in March.

“The Update Leave operation affects less than 5 percent of households nationwide, but it varies locally,” he told El Mensajero May 21.

The Census Bureau will deliver 2020 census packets to 34,500 households across the 14 western New York counties and 5.1 million nationally.

Typically, individuals would have until the end of July to self-respond to the census, but the deadline had been extended to mid-August and could be extended again, said Behler.

“The only day that cannot be flexed is Dec. 31, 2020,” he added, “That’s the date by law in which we have to provide to Congress and to the president counts by state and the overall population of our nation.”

According to the Census Bureau, as of June 16, Rochester’s response rate is 47.1 percent, but is still behind the state response rate of 56.7 percent and the 61.5 percent national response rate.

EDITOR’S NOTE: For more information and updates on the 2020 census, visit https://2020census.gov.