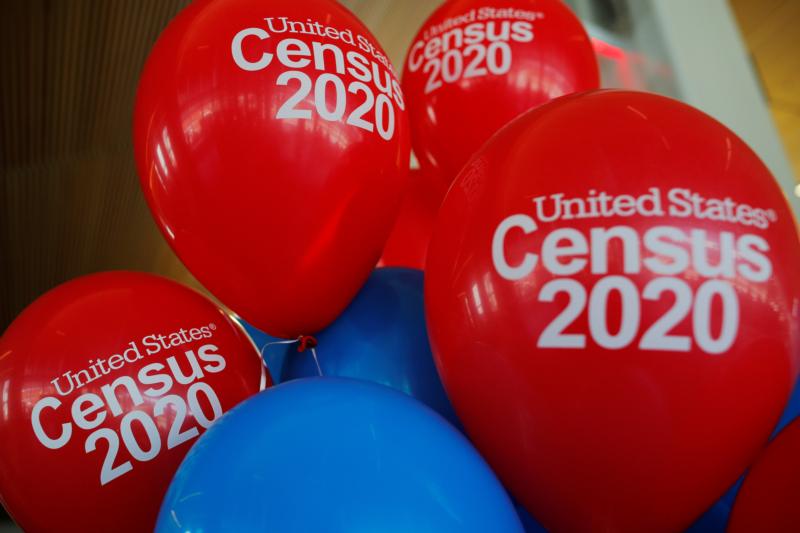 Balloons decorate an event for community activists and local government leaders to mark the one-year-out launch of the 2020 census efforts in Boston April 1, 2019. (CNS photo by Brian Snyder/Reuters)

ROCHESTER — Rochester’s Latinas Unidas partnered with the U.S Census Bureau to host an educational workshop to help inform the community about the 2020 census and how to participate.

About 20 residents attended the “Café Con Leche with The Census” event at the County Public Health Building Feb. 25.

During the event, Nancy Laguer, partnership specialist for the New York regional census center, provided information about the importance of the census, how to participate and available census job opportunities.

According to information at https://2020census.gov, the U.S. Constitution mandates that a census be conducted every 10 years to count all of the people living in the U.S. and its five territories, and participation is required by law. The population data helps determine such things as federal funding for hospitals, fire departments, schools and roads; the number of seats each state will have in the U.S. House of Representatives; and how congressional and state legislative districts are drawn.

According to Laguer, in mid-March, households were to receive invitations to respond to the census questionnaire, which can be completed online, by phone or by mail. Households will receive census reminders from mid-March through April 27 before an in-person follow-up is made by a census employee.

Laguer said that the 11-question survey is available in 12 languages in addition to English. Census language guides also have been translated into 59 non-English languages. These guides are available in video and print formats or if the survey is completed through a bilingual census employee, she said.

Both the questions on the census and census employees will never ask for Social Security Numbers, bank or credit card account numbers, money or donations, or anything on behalf of a political party, noted Laguer. If someone claiming to be a census worker asks for this type of information, it’s a fraudulent situation, she stressed. Suspected fraud can be reported by calling 1-800-923-8282 or by visiting https://2020census.gov/en/avoiding-fraud.html.

All private information collected through the census is never publicly published, Laguer said. She noted that the Census Bureau collects information solely to produce statistics, and the information cannot be used against respondents by any government agency or court. Additionally, census employees are sworn to maintain confidentially for life.

The 2020 New York census employee recruiting goal is 121,000, Laguer said, with an estimated 4,000 to be employed in the Rochester area. Recruiting will take place through the end of March.

Available positions include enumerators, recruiting assistants, census field supervisors and office operations supervisor. Individuals can earn between $16 and $20 per hour depending on the position, and the hours are flexible, dependent on a person’s schedule, she added.

After completing the application process, those selected for positions will receive calls from the census office.

“The phone call can be from any area code or unknown, but you must pick up the phone to accept the offer or the caller will move on and offer it to the next person,” emphasized Laguer.

Raquel Serrano, a Latinas Unidas board member, said during the Feb. 25 workshop that she applied for a census job in December but did not receive an offer to be a census field supervisor until February. Serrano said she found the census job opportunity to be great for extra income as well as helping her community.

“A lot of people think the job is political ,but it’s not. We need Latinos to be represented,” said Laguer. “We are the minority soon to be majority.”

“We need to get all our (Latino) people counted,” agreed Maricela Guzman, who also is a Latinas Unidas board member.

Census partners such as Latinas Unidas that are committed to raising awareness about the census are called Complete Count Committees, Laguer noted. According to the Census Bureau, the partnerships are usually with coalitions of government and community leaders in an effort to organize activities that highlight the message that the 2020 census is easy, important and safe to comply with.

“Our goal is to make our members comfortable with the census, so they can also talk to their families,” said Joann Santos-Santiago, president of Latinas Unidas. “Another reason we hosted the event was for anyone interested in earning extra income while also giving back to the community.”

According to Santos-Santiago, future Latinas Unidas events will feature a 2020 census information table staffed by Laguer.

EDITOR’S NOTE: For more information about the 2020 Census or how to get involved visit, https://2020census.gov/en.html.