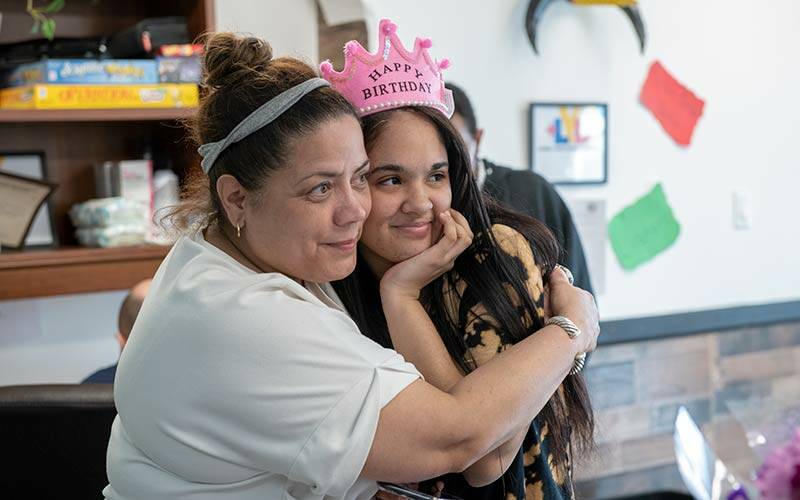 “Who has a gun or can get access to a gun today?” Mercedes Vazquez Simmons once asked a group of teens at Rochester’s Latino Youth Development and Resource Center.

Every one of the 12 teens raised a hand.

“I nearly fell out of my chair,” recalled Vazquez Simmons, the center’s executive director.

The exchange further confirmed what she already knew — that the center at 980 N. Clinton Ave. is sorely needed in a neighborhood where gun violence is normalized and surging. One teen recently mentioned that his house had been hit by a stray bullet, she said.

“Some of these kids are dealing with challenges that are unthinkable,” said Vazquez Simmons, who also represents District 22 as a Monroe County legislator. “They’re taking on adult responsibilities, and it’s just really sad to see.”

The center promises a judgment-free zone and encourages young people — mostly ages 11 to 21 — to share what’s on their minds and work to peacefully resolve differences. Each week from 4 to 7 p.m., nearly 200 youths step over the “Welcome friends” doormat for conflict resolution sessions, job training, after-school support and other services.

Conversations about the need for such a center began nearly three years ago between Vazquez Simmons and the City of Rochester. Last year, the space the center currently occupies became her campaign office. She remembers one of the most common questions she’d get when people came in to pick up literature or pass along congratulations: “Can you help us with the kids?”

Run solely by volunteers, the center has been open unofficially for about a year but saw a substantial uptick in community interest after a ribbon-cutting ceremony Feb. 22. Partnerships have been established with nearby schools and such community agencies as the Children’s Institute, Center City Boxing Club and Vineyard Farms and Outdoors Center for Excellence, Vazquez Simmons said.

In mid-March, the center and the City of Rochester cohosted a two-hour youth summit focused on peer-to-peer mediation. And weekly job fairs have exposed youths to hiring opportunities at government offices and several big-box chains.

Lisandra Rivera said she has seen “a tremendous turnaround” in her son, Jaden Scott, since the 15-year-old began going to the center late last year. He spent most of 2021 at a detention center.

“He now has someplace to be, and a direction,” she said. “This gives him another option than being a criminal.”

Jaden said he is grateful that the center set him up with the opportunity to interview for a job at Walmart.

“I ain’t gonna lie, I was so lost and didn’t know what to do with myself,” he said. “This (attending the center) is turning things around for me, helping me open up. I feel more confident in my decisions.”

Part of that confidence has come from the skills he has learned at the center, such as how to dress, sit up straight, make meaningful eye contact and deliver one side of a thoughtful conversation.

That last skill gets lots of practice when teens at the center disagree, whether about which rap star is more talented or which brand of cell phone is better. Vazquez Simmons pointed to a black podium where the teens take turns standing when making their cases to the room.

More expensive items, such as computers for doing homework and attending telemedicine visits, will hopefully be funded through grants that Vazquez Simmons plans to apply for. At the moment, she and the center’s other volunteers — Ivonne Martinez, crisis counselor; Joy Claboine, gang and conflict resolution specialist; Maria Andujar, emergency coordinator; and Cynthia Rochet, board president — are bringing in their personal laptops for youths to use.

In the meantime, the center will continue offering a place of refuge and motivation for kids who see a future full of possibility.

“If they see a light on, they walk in,” Vazquez Simmons said.

EDITOR’S NOTE: For more information on the Latino Youth Development and Resource Center or to donate, contact Mercedes Vazquez Simmons at 585-281-2540.