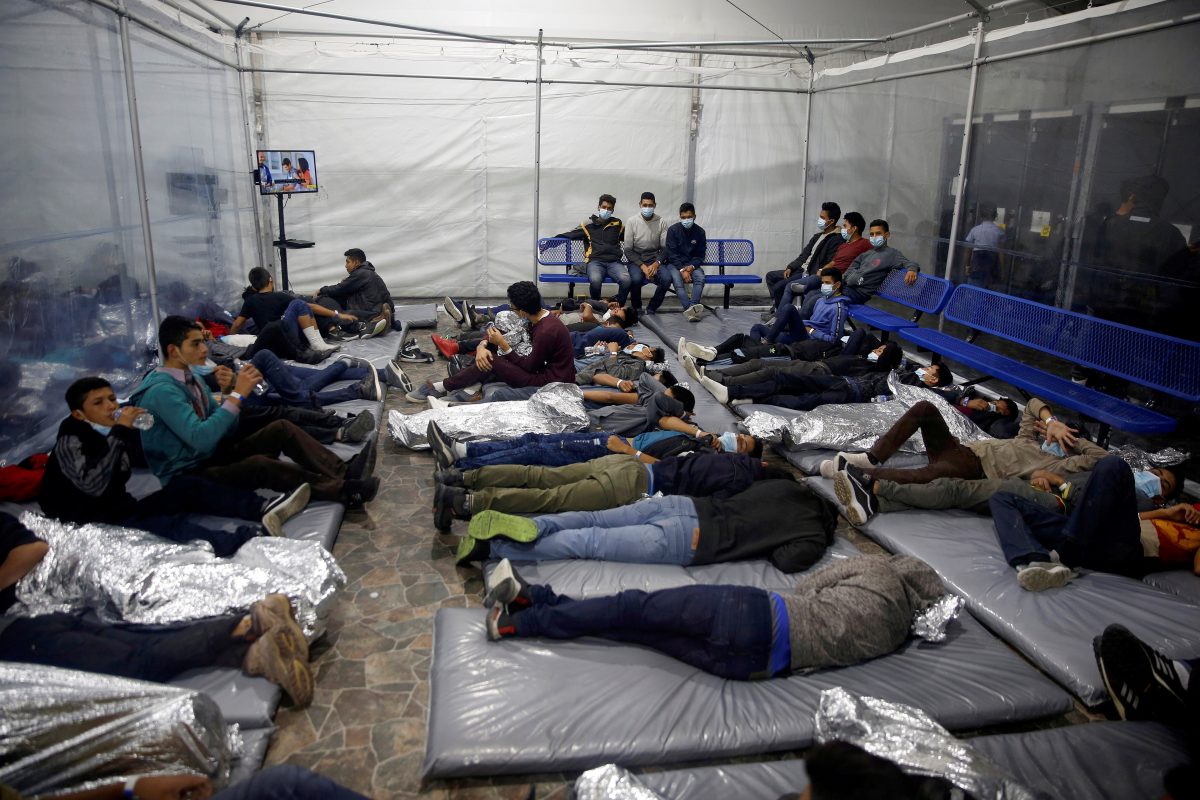 Young migrants lie inside a pod March 30, 2021 at the holding facility in Donna, Texas, set up in February by U.S. Customs and Border Protection, an agency within the Department of Homeland Security. (CNS photo by Dario Lopez-Mills/Pool via Reuters)

The only difference, it seems, is what’s in the news.

Because of the quick rise in the number of unaccompanied minors crossing the U.S.-Mexico border, more people are responding to the call to help made on social media by the U.S. bishops’ Migration and Refugee Services.

MRS posts messages on its Facebook and Twitter accounts about the need for foster care of young migrant children, both those crossing the border and refugee minors currently across the Atlantic Ocean awaiting foster families in the United States.

But MRS hasn’t added any other social media outlets to its portfolio, and is posting that the foster care needs messages in the same rotation with other MRS resettlement programs. After all, “I don’t want any one program to feel like we’re not promoting them,” according to Mark Priceman, MRS’ assistant director of communications.

“They’re the same messages. Basically, it gets picked up in times of crisis,” Priceman told Catholic News Service in a March 29 phone interview.

Priceman can point to two other times when this has happened: in 2017, when then-President Donald Trump policies resulted in thousands of family separations (in 2018, he signed an executive order to end family separations), and in 2018, when there was an uptick similar to now of unaccompanied minors crossing the border.

He added his belief the upsurge of interest in helping MRS is driven more by the news coverage of the border crossings than MRS’ social media posts.

“We’re trying to get eyeballs to the program,” he added. “That’s the goal of it, to spread the word of what we’re doing.”

Priceman said, “The overarching theme is that we’re welcoming the newcomer.”

Shah said that the unaccompanied minors crossing the U.S.-Mexico border hail largely from the Central American nations of El Salvador, Guatemala and Honduras. The refugee children in need of foster placement come from “all over,” she noted, although there is a large number from Eritrea.

While MRS is processing more children this year than in 2020, the numbers can be deceiving. “Actually, because of COVID, the numbers have declined pretty significantly in the past year,” Shah told CNS in a March 30 phone interview.

The nationwide network of resettlement agencies has been affected by progressively smaller caps over the past four years on the number of children who can be placed, she said. Social distancing precautions are also an issue.

Shah added: “Foster parents have different circumstances in their household — an elderly family member, or some other situation that may preclude them from adding someone.”

Nor does today’s increase of interest in foster care placement immediately result in more children being placed in U.S. homes, according to Shaw. “The foster parents in our programs,” she said, “receive extensive support and training. And also, some of the training is geared toward behavior challenges and cultural and linguistic issues.”