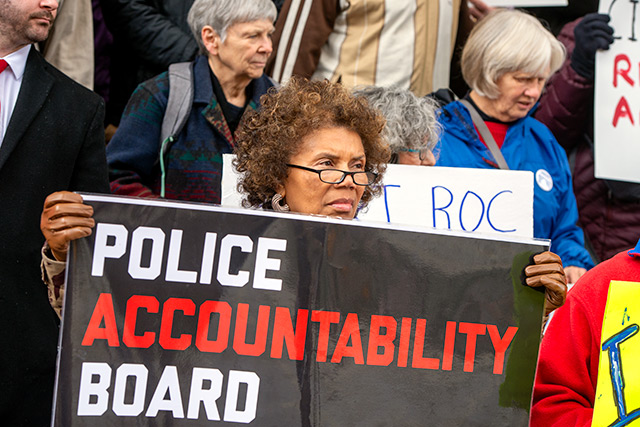 Gayle Harrison participates in a 24-hour vigil supporting an all-civilian police accountability board outside of Rochesters City Hall May 2.

The City of Rochester’s Police Accountability Board referendum was approved during the Nov. 5 general election.

Unofficial results were posted to the Monroe County Board of Elections website late in the evening on Nov. 5. As of press time Nov. 8, the tally showed that almost 20,000 city residents voted for the proposition, compared to about 6,500 who voted against it.

The referendum, listed as Proposition No. 1 on the back of the Nov. 5 ballot, proposed to amend the city charter to authorize the creation of the Police Accountability Board.

According to the approved proposition, the PAB will consist of nine unpaid Rochester residents: one appointed by Mayor Lovely Warren and eight appointed by the Rochester City Council, with four of the council’s appointees nominated by a coalition of community organizations. The PAB will have the power to independently investigate civilian complaints, subpoena information for its investigations and determine whether individual Rochester Police Department officers have committed misconduct. The PAB also will create disciplinary guidelines, with an opportunity for input from the chief of police and the police union. If the PAB finds, after a hearing, that an officer has committed misconduct, the chief of police will be required to impose discipline consistent with disciplinary guidelines. The PAB also will recommend changes to the police department’s policies, practices and training.

The establishment of the PAB will occur over the next 90 days.

During an Oct. 31 press conference, Mike Mazzeo, president of the Rochester Police Locust Club, said that the club’s legal fight against the legislation will continue.