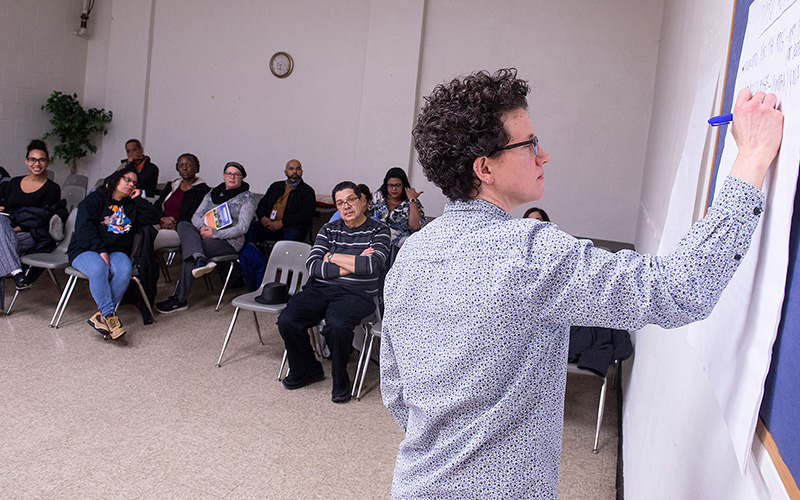 During a Feb. 10 community meeting, Sara Scott, director of recreation and youth services for the City of Rochester, leads a discussion about Don Samuel Torres Park. (EMC photo by John Haeger)

Ibero-American Development Corp. is using a $36,000 grant from the Trust for Public Land to help beautify and increase the safety of the area around Don Samuel Torres Park on North Clinton Avenue.

“We’re going to spend energy on activating and keeping the park at the center of the neighborhood strong, so that we can create a safe environment for kids and families,” said Miguel Meléndez, director of special projects at Ibero-American Action League, which is affiliated with IADC.

In addition to the beautification and landscaping efforts, Meléndez said the grant also will fund different activities to be conducted at the park as well as the creation of a program similar to a neighborhood watch.

Meléndez said he cowrote the Trust for Public Land grant proposal with Sara Scott, director of recreation and youth services for the City of Rochester. According to Trust for Public Land’s website, (www.tpl.org), the organization creates parks and protects land for people, promoting healthy, livable communities.

Although IADC will be overseeing the work that is being made possible through the grant, Scott said that the city will play a supporting role in the project due to its involvement in the “10-Minute Walk to Parks” campaign.

The 10-Minute Walk campaign is a national effort led by the Trust for Public Land in partnership with the National Recreation and Park Association and the Urban Land Institute. The campaign was created to improve access to safe, quality parks and green spaces in cities across the U.S.

Scott said that in 2018, Rochester received a planning grant from the National Recreation and Park Association to create a “10-minute Walk to Parks” access and activation plan. As part of the initiative, Scott said the department of recreation has focused on five city parks, including Don Samuel Torres Park.

As part of the 2018 grant, the city and its partners, including IADC, identified barriers to park access and use, then developed recommendations to improve overall park access and programming.

Ideas for programs, events and activities at Don Samuel Torres Park will be discussed during a series of upcoming community meetings, Meléndez said. During a meeting in February, community members suggested a Zumba instructor hosting classes and domino tables for a tournament.

According to Meléndez, there will be another meeting in March in addition to door-to-door outreach in the immediate area surrounding the park to comply with the 10-Minute Walk campaign.