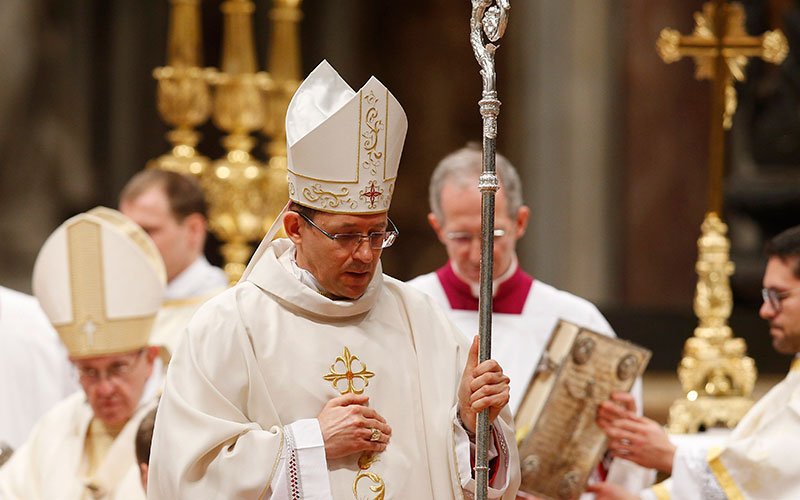 Archbishop Waldemar Sommertag, the Vatican ambassador to the Vatican, is pictured in St. Peter's Basilica at the Vatican March 19, 2018. (CNS photo by Paul Haring)

The Vatican called Nicaragua’s expulsion of the Vatican ambassador “grave and unjustified” as the rift deepened between the Catholic Church and the government of Nicaraguan President Daniel Ortega.

In a March 12 statement, the Vatican said the Nicaraguan government “has decided to withdraw the consent (welcome) for Archbishop Waldemar Stanislaw Sommertag, apostolic nuncio to Nicaragua since 2018, imposing him to leave the country immediately after notifying him of that measure.”

The statement continued, “Such an order is incomprehensible since (Archbishop Sommertag) has worked tirelessly for the good of the church and the Nicaraguan people,” which included serving as a witness in a national dialogue between the government and opposition and working to free political prisoners.

“Convinced that this grave and unjustified decision does not reflect the sentiments of the deeply Christian people of Nicaragua, the Holy See wishes to reaffirm its full confidence in the pontifical representative.”

The expulsion of the nuncio highlights the difficulty of the church-state relationship in Nicaragua, where the Catholic Church has sought reconciliation amid political turmoil and come under attack for offering support to political prisoners and their families.

Ortega’s government has branded church leaders “coup mongers” and terrorists, while it suffocates civil society and stamps out all opposition. The government offered no explanation for expelling the nuncio.

The Nicaraguan bishops’ conference confirmed in a March 9 statement that Archbishop Sommertag left the country March 6. The conference declined further comment, saying in the statement that it was a bilateral matter between the Vatican and Nicaragua.

The Nicaraguan newspaper Confidencial reported a string of incidents, suggesting difficulties in the months leading up to the expulsion.

In one example, the newspaper noted that Archbishop Sommertag flew to Rome Jan. 10 rather than attend Ortega’s inauguration that same day. Ortega won the November 2021 election — denounced internationally as a sham — after his main opponents were arrested and imprisoned.

The nuncio in Nicaragua traditionally has been honorarily seen as the dean of the diplomatic corps, but that designation was stripped by the government in November after Archbishop Sommertag used the term “political prisoners,” according to news reports.

His role in Nicaragua was never easy, as he drew criticism from all sides. Critics of the Ortega regime expressed disappointment in him not being outspoken, a role church observers say a diplomat should not be expected to perform.

The Nicaraguan University Alliance, a student organization, issued a statement March 12 crediting Archbishop Sommertag with helping win the release of more than 500 political prisoners. The alliance also credited the nuncio with helping the families of those prisoners gain access to their imprisoned loved ones and improving the deplorable conditions in which they were held.

Archbishop Sommertag “has been a constant defender of peace and dialogue and his expulsion … is regrettable for many of the families of political prisoners,” the statement said.

It’s uncertain if Archbishop Sommertag will return to Nicaragua, though the nunciature has remained open.