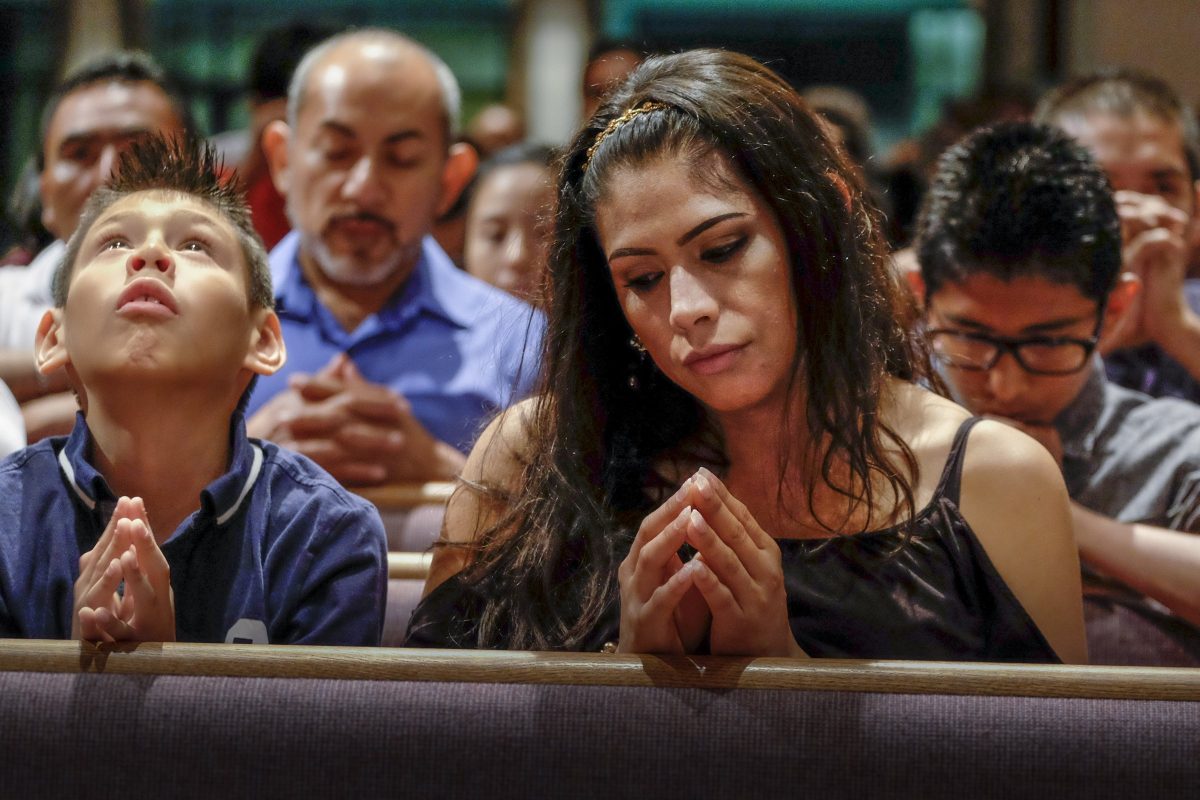 People in Nashville, Tenn., pray during the litany of saints at a Mass for the dedication of Sagrado Corazon Church in this 2016 file photo. (CNS photo by Rick Musacchio/Tennessee Register)

WASHINGTON (CNS) — A new federation to focus on issues surrounding Hispanic family ministry has been formed by the National Association of Catholic Family Life Ministers.

Called the Federation for Hispanic Family Ministry, it won’t be spun off from the parent organization. Rather, it will stay as part of the association that founded it.

“The association provides this wealth of resources” that those in Hispanic ministry can access, said Mike Day, family life director for the Diocese of St. Augustine, Florida, in an Oct. 27 phone interview with Catholic News Service. Day was NACFLM president when the idea for a Hispanic offshoot was developed.

“It’s been quite a while” since he first felt the lack of an outreach to Hispanic families in the United States, said Jake Samour, marriage and family life director for the Diocese of Wichita, Kansas, and the first president of the new federation.

“I think it was obviously the V Encuentro process” that got the ball rolling to create a structure that catered to Hispanics, he told CNS in a separate Oct. 27 phone interview.

Talking to people at the Encuentro and elsewhere, Samour said, the big questions that emerged were, “What is the reality? What is the see-judge-act? One thing that kept coming to me, when it comes to family ministry to Hispanics, is we’re not very organized.”

“There was no big plan to address the needs of Hispanic families from a national perspective. That’s when I came to Mike,” Samour said. “He was prudent in saying let’s form a committee, let’s ask other people who not part of NACFLM, on how to go about this.”

“Demographically, the Hispanic population in the Catholic Church is technically not a minority,” Day said, “though we treat it that way.”

In an Oct. 28 phone interview with CNS, Bishop Rodriguez said he’s noted the deficiencies in Hispanic family ministry over the years in his own ordained ministry.

“One of them is the transmission of our faith, no? I see that we have very strong Catholic faith, that’s true, but that’s not happening in the following generations,” he said. “They don’t share our strong faith.”

He gave a case in point: “For us Hispanics, Our Lady of Guadalupe, the mother of our Lord, is an important part of our life. When you see the young guys … they don’t feel the same way. They love Mary,” Bishop Rodriguez said, “but it’s not integrated” with the faith.

“Most people are supposed to be serving Hispanics, because they’re all over the country,” Samour said. “What is there to help single mothers? Is there something to help those who are divorced? Marriage prep? Family history?” he asked.

“There’s some stuff out there. You know what happens. People come here and they bring the (religious) movements they had back in Latin America. That feels like home,” he told CNS. “But not every single Hispanic in this country was born in Latin America. They were born here” in the U.S., so those movements’ efficacy is limited for them.

The new federation, which will have representation in every aspect of NACFLM, is “not just for Spanish speakers,” Day said. “The association provides this wealth of resources. It’s meant to be a resource for everyone, not just the Spanish-speaking population.”

As for hopes and expectations for the new federation, “we’ve had a lot of hopes and dreams. And taking a lot of baby steps to get to this point,” Day said. “I would hope for a more unified effort to ministerial outreach in this area.”

As episcopal liaison, it will be Bishop Rodriguez’s job to notify his fellow bishops about the new federation. He sees much potential in the new organization.

“The next step is to begin to get the federation to work on the things I’ve been working on my own,” Samour said. “First, one of the things we want is to have a bigger involvement in NACFLM in its yearly conference: a place for networking, a place for professional development, membership in the conference, a few other endeavors that are worthy of the federation.”

He added, “I really feel called to this. I’m making time for it.”

Editor’s Note: The website of the National Association of Catholic Family Life Ministers is https://nacflm.org.