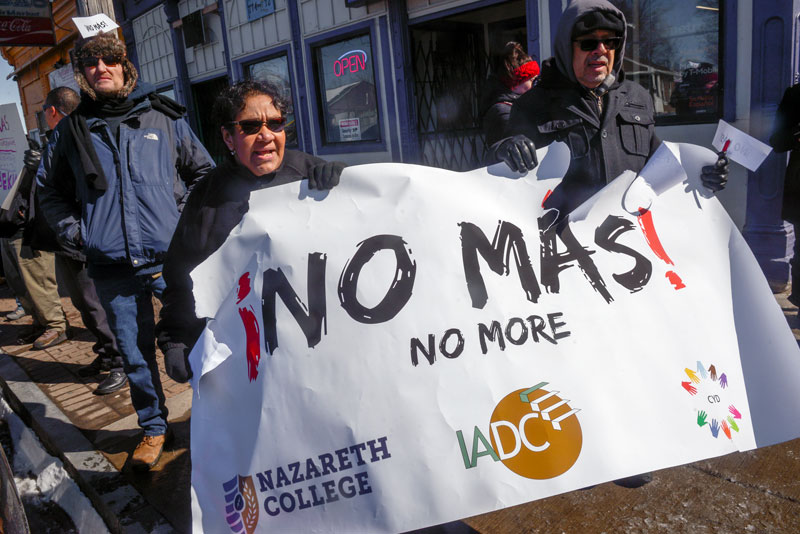 Members of the community who gathered on the corner of North Clinton Avenue and Rauber Street March 23 shouted those words as they formed a human chain of more than 25 people to protest the use of drugs in their northeast Rochester neighborhood.

“And the community says,” Santos Cruz said through a megaphone as the crowd responded, “No more!”

Cruz has been a coach for the Rochester Hispanic Youth Baseball League for the last three years. He said he decided to get involved in the ¡No Mas! human chain demonstration because his team once practiced at nearby Don Samuel Torres Park until frequent drug activity in the park itself forced practices to move to Baden Park on Upper Falls Boulevard. Don Samuel Torres Park has been cited by community members as a source of heavy drug activity in the neighborhood.

“There would be drug needles littered everywhere,” Cruz remarked about the condition of Don Samuel Torres Park.

Cruz hopes that such efforts as ¡No Mas! human chain demonstrations, along with the El Camino Revitalization Plan, will help to clean up the neighborhood. The El Camino Revitalization Plan, a partnership between the Ibero-American Development Corp. and the City of Rochester, aims to clean up and redesign northeast Rochester with an emphasis on the Clinton Avenue corridor.

The next ¡No Mas! human chain event will be April 26. For more information, visit bit.ly/2FAUdwK.