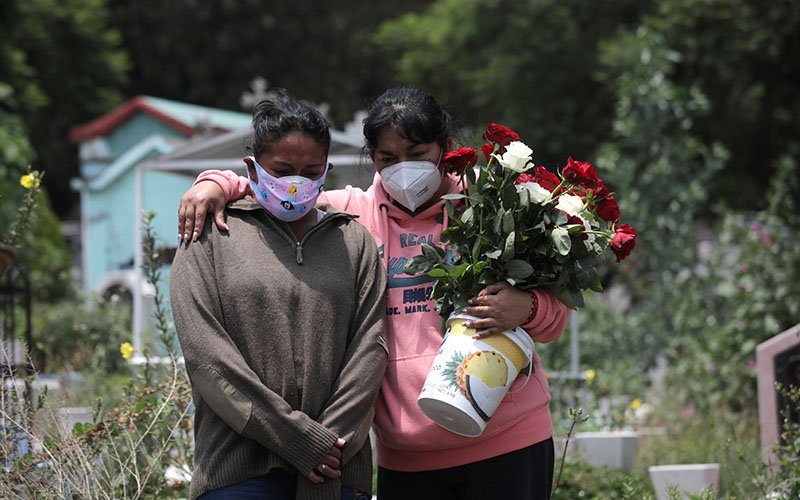 Relatives wearing protective masks react near the coffin of a man during his burial at a cemetery in Mexico City Aug. 6, 2020, during the COVID-19 pandemic. (CNS photo by Henry Romero/Reuters)

MEXICO CITY (CNS) — The Archdiocese of Mexico City urged people to take pandemic precautions more seriously, saying in an editorial that the country could not quell its COVID-19 contagion unless the population did its part.

“There are no pretexts. If the pandemic does not ease in Mexico, it is because as a society we do not want it to occur,” read an Aug. 9 editorial in the archdiocesan publication Desde la Fe.

“It’s necessary to ask ourselves: Have we taken the necessary measures to care for ourselves? Have we promoted strict sanitary controls in our homes and workplaces? Have we avoided meetings, parties and unnecessary visits?” the editorial continued.

“Of the thousands of lives cut short, there is a great responsibility in the omissions, the excuses, the ignorance and the selfishness of not assuming responsibility and caring for each other.”

The archdiocesan editorial followed a week in which Mexico’s COVID-19 death toll passed 50,000 fatalities — third highest in the world — and the federal government continued coming under scrutiny for policies such as not carrying out widespread testing and not unequivocally recommending the use of masks.

Mexico has started reopening its economy after a limited quarantine, and churches in some dioceses — including Mexico City — have resumed services with limited capacity.

As the death toll climbs, health officials have increasingly pointed to problems in the population, especially high consumption of soft drinks, which they link to COVID-19 comorbidities such as diabetes and obesity.

Priests say many parishioners showed skepticism with early stories of the pandemic and were slow to adopt measures such as social distancing and wearing masks.

“People thought it was a hoax,” said Father Robert Coogan, an American priest in Saltillo, where churches remain closed.

He said people have a long history of believing that the government is lying to them — causing skepticism early in the pandemic — but took measures as the death toll started climbing. Many have returned to old habits as the pandemic drags on, however.

“People are tired of it and, economically, it’s tough for a lot of people,” Father Coogan said.

Several priests said in interviews during the pandemic that people see no need to take further precautions, because President Andres Manuel Lopez Obrador does not wear a mask and speaks optimistically of the pandemic ending sooner rather than later.

“It doesn’t help at all,” said Father Gustavo Andrade, a priest in Chiapas state. “We have to set an example, because if we’re going to talk about taking care of ourselves and we don’t give signs of doing so, then people won’t believe what we’re saying.