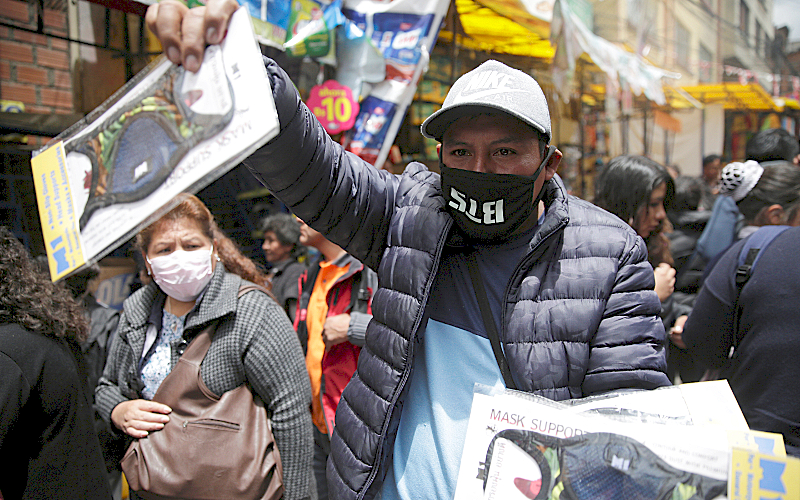 Staff members at the hospitals said they were overwhelmed and could not handle the case, according to Bolivian news reports. The 65-year-old woman, who had been transported to Santa Cruz from the town of San Carlos, was one of three known coronavirus cases at the time; by March 17 that number had risen to 11. She was given shelter in a regional government building.

As the COVID-19 pandemic began spreading through Latin America, church officials elsewhere moved to take action. Archbishop Gualberti called on his listeners to “follow the way of the Samaritan woman and the Israelite people in the desert, to drink the living water of Jesus.”

In a March 15 homily referring to the Gospel about Jesus meeting the Samaritan woman at the well, he said the “water of life” is especially urgent “in this climate of uncertainty and fear because of the global coronavirus pandemic that also affects our country.”

“Events like those in recent days, blockades of hospitals and roads to stop the admission of brothers and sister affected by the virus must not be happen again,” Archishop Gualberti said. “These acts, besides being crimes, are serious sins before God.”

The archbishop urged Bolivians to follow the norms issued by government authorities to address the health emergency, saying everyone must make “the fight against this contagious and virulent virus” their “absolute priority.”

He called on the faithful to “act with mercy, with a spirit of fraternity and the desire for service, without fear of sacrifices, following the Lord’s example.”

Bolivia had confirmed 11 cases of coronavirus as of March 17 and has suspended flights from some of the most affected countries in the world, in an effort to contain it.

The pandemic comes on top of a political crisis over disputed elections late last year that divided the country and forced former President Evo Morales into exile, first in Mexico and then in Argentina.

In Ecuador March 14, the conference of bishops announced that all Masses and parish and diocesan activities, including Holy Week and Easter processions, were canceled to comply with a government order limiting public gatherings and transit.

Two days later, Mexico’s bishops announced the suspension of Sunday Masses due to COVID-19. Parish activities and retreats also were canceled. Churches will stay open for prayer and adoration, although priests will celebrate Mass in private, with liturgies livestreamed.

In Chile, Sunday Mass celebrations continued, and the bishops’ conference encouraged prelates to evaluate whether other activities should be held. The Archdiocese of Puerto Montt, in southern Chile, canceled all events involving more than 200 people, including the Mass to begin the school year. A scheduled pilgrimage of an image of Our Lady of Fatima, from Portugal, was canceled.

Uruguay’s bishops suspended all church activities, including Masses, for two weeks beginning March 15. Churches were to remain open for visits, but the faithful were asked to “avoid crowds.”

Paraguay’s bishops issued a pastoral letter March 11 canceling all public church activities, including Sunday Masses, until March 24. Private confessions and visits to administer the sacrament of the sick could still be scheduled. “We invite you to engage in fasting and abstinence, as usual,” the bishops wrote. “We call (people) to conversion, and to avoid pessimistic comments and false, alarmist and slanderous information. We also urge the mercy of caring with respect and charity the life and health of all.”

The Colombian bishops did not suspend Masses, although they encouraged people over 70 to stay away. They urged priests and the faithful to practice good hygiene, receive communion in the hand and not participate in liturgies if they were ill. Priests were encouraged to wear masks when hearing confession or visiting the sick.

In Guatemala, church officials must inform public health authorities of any activity involving more than 150 people. Church officials encouraged the faithful to pay attention to official announcements and warned, “Spreading false news about this matter constitutes a serious sin.” In a statement, they added: “Trust in God must encourage us to intensify our prayer in these days in which the epidemic, which sometimes seems like only something from the past, shows us that we are fragile and subject to situations that are beyond our control.”