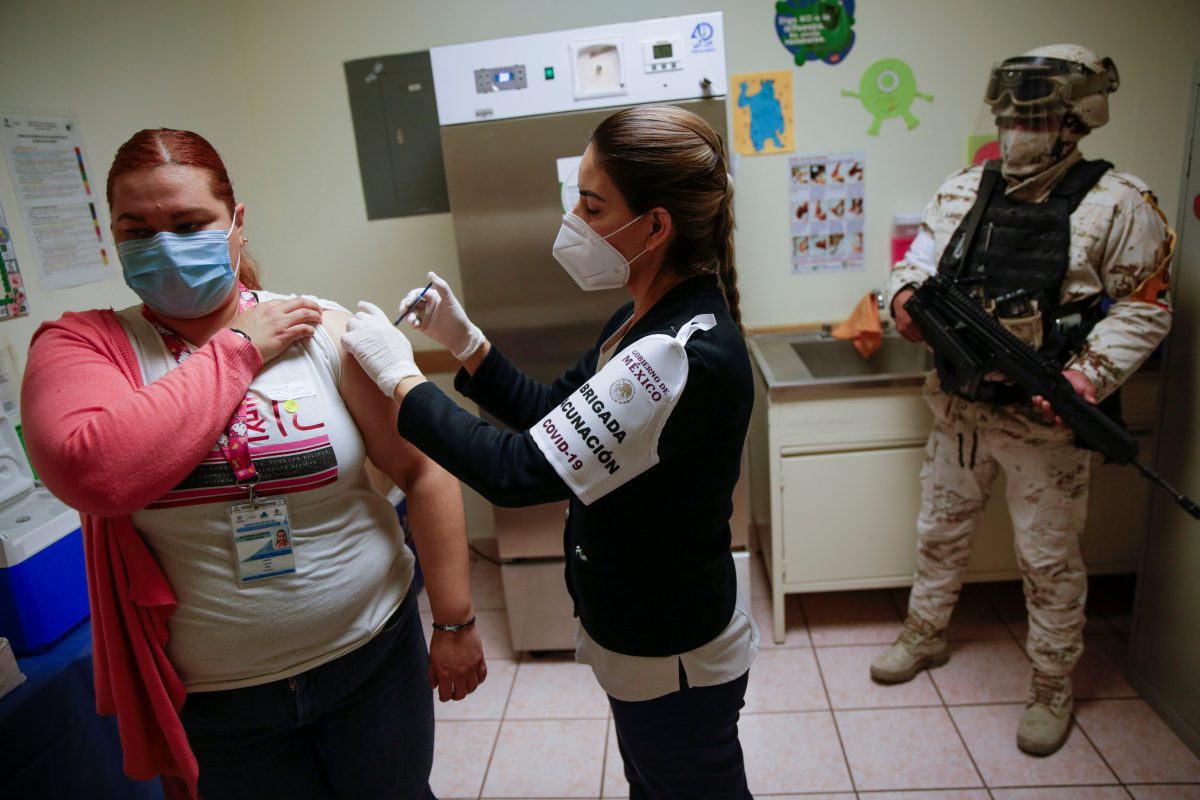 A health care worker receives an injection with a dose of the Pfizer-BioNTech COVID-19 vaccine at a hospital in Ciudad Juarez, Mexico, Jan. 14, 2021. (CNS photo/Jose Luis Gonzalez, Reuters)

Palomino runs a center for vulnerable senior citizens in the San Martín de la Caridad parish in Lima’s Villa El Salvador district. A new lockdown that began at the end of January to slow the second wave of the COVID-19 pandemic has closed the center’s doors, so Palomino is delivering food instead of serving meals. He is not certain when, or if, things will get back to normal.

Peru had the highest per capita death rate from COVID-19 in Latin America in the first week of February and was ranked 17th worldwide, according to the Johns Hopkins University’s COVID-19 tracker. Its economy contracted by approximately 12% last year, the most significant of the region’s large economies, and unemployment remains above 13%.

A solution would be vaccination, but Peru only received the first batch of 300,000 doses of a Chinese-made vaccine Feb. 7, and the national rollout will be slow. Many of the people in Palomino’s program are internal migrants who live in extreme poverty, often overlooked even on the country’s registry for social programs.

“To be honest, I do not think they are even considering the seniors here for the vaccine. They received little health care before, but it is worse today. They have simply been forgotten,” said Palomino.

Peru is not alone in Latin America, where countries have had difficulties obtaining vaccines as wealthier nations have secured the lion’s share of doses already produced and those in the pipeline, often far more than they need, and national programs have been criticized for internal inequities.

The delays also breed resistance; false information about the vaccines and “miracle” cures proliferate. In Peru, 75% of the population said they wanted to be inoculated last August when the government first talked about vaccines. In January, when the government was still only talking about the vaccine, the same polling company, Ipsos Perú, found that only 48% wanted the shot.

“The pandemic has exposed the worst side of humanity. The wealthy countries are not interested in solidarity with their neighbors, let alone poorer countries. This has slowed the global response,” said Maria Rothe, a public health specialist and director of Bolivia’s national health system, which that is running the country’s vaccine program.

Faith-based organizations and bishops’ conferences in the region have been urging governments not only to secure vaccines, but to prioritize the most vulnerable. They are also calling on citizens to get inoculated and steer clear of fake information.

The health pastoral of the Mexican bishops’ conference released a letter Feb. 9 encouraging the population to be vaccinated. The bishops addressed concerns about vaccines and stated that getting immunized “is an authentic action to safeguard the common good and promote a true culture of life.”

Mexico had 1.9 million cases and was 18th on the list of nations for per capita deaths, following right behind Peru in the Johns Hopkins tracker. It was third in total number of deaths, behind the U.S. and Brazil.

Brazil, the country with the largest population in the region, has had parallel developments with the vaccination process. The government rollout has been slow and riddled with problems, but the public Butantan Institute in São Paulo state is starting to produce vaccines created by China’s Sinovac and the Swedish-British AstraZeneca, which could make Brazil a regional hub for fighting the virus going forward. Neighboring Argentina also will produce vaccines.

Brazil’s bishops have called on the government to ramp up the immunization campaign, saying it is the only way to stop the virus. Brazil registered more than 230,000 deaths, with 9.4 million cases of the virus by the first week of February. It trails only the United States and India in total cases.

The jungle city of Manaus, in the north, has been particularly hard hit by the second wave and its own strain of the virus that quickly overran the health system in late January. The country’s Indigenous people are among the most vulnerable, but they are not considered a priority, Porto Velho Archbishop Roque Paloschi told Catholic News Service.

He said Brazil’s government took too long to design an adequate strategy to control the pandemic and begin vaccinations. He said there is also a problem “with the Brazilian practice of people ‘jumping ahead in the line.’ Many people who are not in a high-risk group have been vaccinated and this is a direct attack on the poor. We need to raise individual and community ethical awareness about our responsibilities,” he said.

Archbishop Paloschi said all churches, and the Catholic Church in particular, had an important role “to encourage people to trust in science and combat the denial mentality that has been increasing with the pandemic.”

The bishops in landlocked Paraguay, which has yet to receive any vaccines, have been following a similar line, calling on Paraguayans to follow the science and avoid being drawn in by fake news.

“A great deal of false information is out there and it has people troubled. This is why the episcopal conference released a letter on vaccination, saying that getting vaccinated is not only necessary, but an act of charity. We have an obligation to ourselves and to others to be immunized,” said Ciudad del Este Bishop Wilhelm Steckling.

The Paraguayan government announced in early February that had a deal with Russia to received 3 million doses of the Sputnik V vaccine. Two of its neighbors, Argentina and Bolivia, have already received the Sputnik shots. Paraguay has recorded 138,955 cases and 2,846 deaths by Feb. 9, giving it one of the lowest per capita rates in the region.

“The networks (that) faith-based organizations have and the trust they have built up over the years is the most important access point to these communities,” he said.

Malteser operates programs in Colombia’s Magdalena and La Guajira departments, key points of entry for Venezuelan refugees. Colombia is home to more than 1.7 million Venezuelans, more than half of whom have “irregular” status.

Tripptrap said problems reaching vulnerable population with vaccination campaigns are compounded for refugees. In Colombia, where the immunization campaign had yet to start, the government announced Feb. 8 that would reverse its policy and include immigrants with irregular status in its national immunization plan. With 2.16 million cases of COVID-19, Colombia is second only to Brazil in cases in Latin America.

“Migrant refugees there are afraid, they are traumatized. It is about trust, and we have to have a track record of being a reliable partner. We are in service to our brothers and sisters, and that is the starting point,” he said.

He said there needs to be a more equitable approach to vaccines not only in Colombia, but globally, and that exclusions are the opposite of what should be done.

“Without equity, we become societies that exclude, that block millions of people from coming to the table. The vaccine should not be property registered to this company or that laboratory, but a common good for all humanity,” he said.