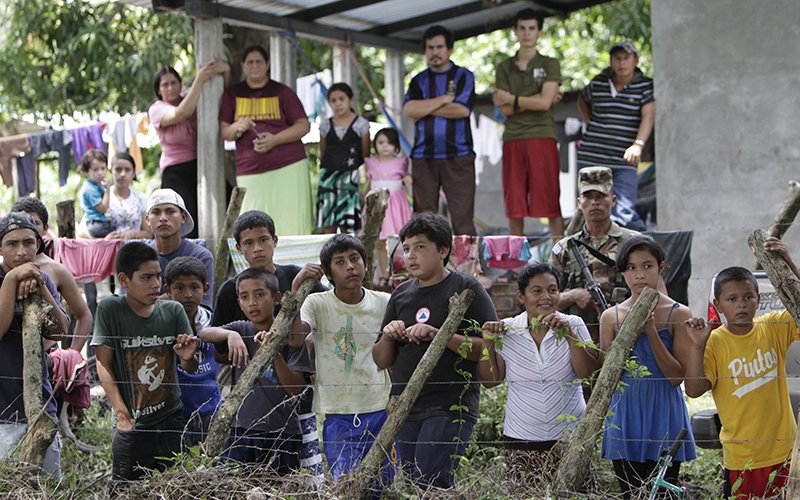 Young people are pictured in a file photo leaning on a fence in the Bajo Lempa region of El Salvador. Several Catholic organizations are among church groups in El Salvador denouncing the illegal arrest of eight teenagers in the region as part of a crackdown on gangs. (CNS photo by Ho New, Presidential House via Reuters)

Bukele says he is targeting the gangs like Mara Salvatrucha, or MS-13, that control vast territories in El Salvador. But civic groups claim the army is arresting innocent people, and the recent arrest of eight boys in a traditionally Catholic area illustrates the situation.

The region of Bajo Lempa was settled in the 1990s by refugees of El Salvador’s civil war. With the encouragement of the late Father Pedro Declercq, they formed base ecclesial communities — known by the Spanish acronym CEBs — which used Bible study and prayer to address social or economic problems. The communities remain active today.

José Salvador, a local CEB leader, said 109 local residents — most of them young men — have been unfairly arrested over the past few months. He has taken their cases to the authorities, but nothing has been done yet. He said children and teenagers have been continually harassed by police and soldiers since March.

“If a boy is standing on the street, they see him as a gang member. Last week, soldiers got into a soccer field and inspected all the children, including a 12-year-old kid,” he told Catholic News Service in mid-November.

On Nov. 5, eight boys, ages 14 to 17, were taken from their homes at night by members of the military and kept inside of an empty house for hours. According to their relatives, they were submitted to psychological and physical torture before being released Nov. 6 at about 11 a.m. Family members say they remain traumatized.

The grandmother of one of the teens described their treatment in an audio message sent to CNS by Father Fredis Sandoval: “They threatened them, threw banana peels for them to eat and called them dogs. They told them they would never see daylight again.”

Father Sandoval, a member of Concertación Monseñor Romero, an alliance of human rights organizations, said that a week earlier, the teens had presented a play about El Salvador’s history, with a critical view from events like the colonization of Central America and the role of the military during the civil war.

“The piece also portrayed the killing of St. Oscar Romero and the creation of the CEBs in Bajo Lempa by Father Declercq,” said the priest.

Salvador said the young actors wore theatrical military uniforms and carried fake guns. Soldiers took pictures of them during rehearsals and knew it was an artistic work.

“They knew that they were being criticized in the play, appearing as the bad guys. And got angry about it,” he said.

The play was a school activity and was created by the boys and their teachers. “Now they fear there will be repression against teaching history,” Salvador added.

“The children’s and teenagers’ rights are being continually violated by the state of exception,” he said, referring to the suspension of rights. “Young people are the ones accused of being gang members without evidence.”

Henri Fino, executive director of the Foundation of Studies for the Application of Law, known as FESPAD in Spanish, told CNS the detention of the eight boys spurred controversy in El Salvador and “made evident that the state of exception is an instrument of repression.”

“That case is probably one among many. Those boys’ mothers and sisters were brave enough to denounce what was happening. But many people are afraid that their relatives can suffer the consequences of a denouncement and prefer to deal with things privately,” he said.

Fino said FESPAD and other groups “have always argued that the state of exception is not effective to combat crime” and that the ruling “stigmatizes people according to age, place of residence, and personal appearance.”

“The government’s rhetoric has always been false. But Bukele is not willing to change anything because he feels supported by his high approval rate,” he added.

While FESPAD, the Bajo Lempa base communities and other groups keep denouncing the violations to international organizations, including the Inter-American Commission on Human Rights, the Catholic hierarchy has failed to take a firm action against the state of exception, said Father Sandoval.

“It is painful to say it, but the church has not said anything about the detention of those boys. The hierarchy is not making an effort to accompany the cases and dialogue about them,” he said.

On Nov. 6, before the boys’ release, a number of Catholic organizations, including Concertación Monseñor Romero, signed a statement denouncing the illegal detentions and asking the authorities to take action against them.