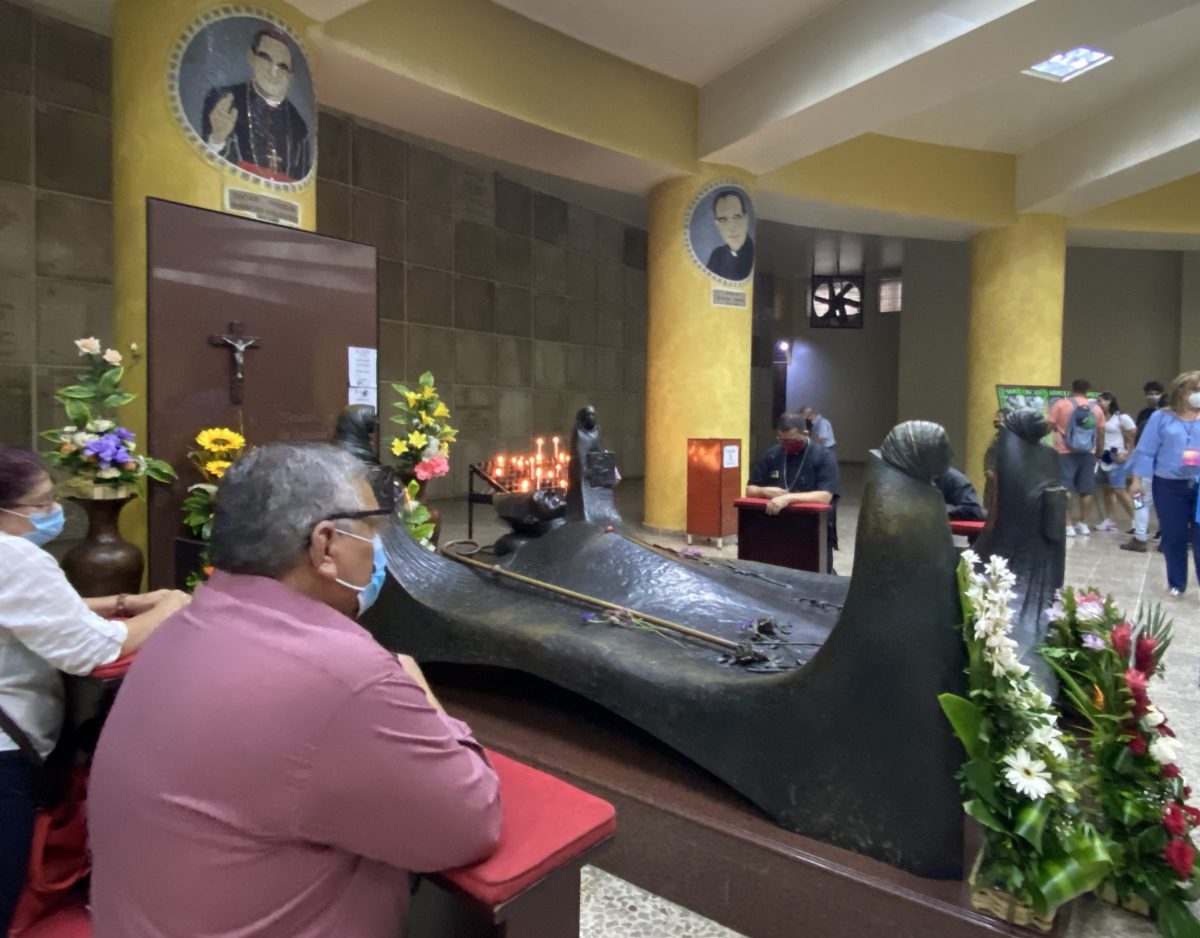 With COVID-19 restrictions in place, lay Catholics gather in smaller groups around the tomb of St. Oscar Romero at the cathedral in San Salvador, EL Salvador, March 24, 2021, the 41st anniversary of the Salvadoran saint's martyrdom. (CNS photo by Rhina Guidos)

Symposiums, concerts, theater pieces and even international pilgrimages to remember St. Romero came to a halt when the country abruptly shut down its airport March 17, 2020, just days before the March 24 celebration. In an effort to keep out the coronavirus, the president put the country on lockdown, closing almost all buildings, including churches, in the predominantly Christian nation.

But this year, hundreds of devotees of the Salvadoran archbishop, martyred by a single bullet as he celebrated Mass in 1980, double-masked their faces — some wore face shields — and packed the cathedral in San Salvador, heading down to the crypt to touch the tomb where the saint is buried. Some rubbed the miter on the bronze work of art that covers his tomb, kneeled and cried in front of it as they asked for the saint’s intercession in liberating the world from the pandemic and El Salvador of the different social ills it faces today.

During a March 24 Mass commemorating the saint’s martyrdom, Archbishop Jose Luis Escobar Alas of San Salvador said in a homily that if St. Romero were alive today, he would “advocate for an El Salvador free of impunity, corruption, one with true social justice, with opportunities for all to advance … a country free of violence and one of peace.”

In some circles, the pandemic has become almost a side conversation, just another calamity in a long list of challenges, such as gang violence and lack of jobs, that Salvadorans face.

Following a tense campaign for legislative and municipal elections — two people died — El Salvador’s problems will not be solved with a vaccine. A majority of the country’s citizens have all but turned absolute power into the hands of the president and the party he founded, saying they want change and can’t wait any longer.

The archbishop said in his homily that Salvadorans face an unjust system of “spurious laws” that, “far from protecting the vulnerable and weak, protect capital, delinquency and corruption.” St. Romero would ask for reform of the social security or pension benefits, tax codes, the rights of workers, migrants and women — all groups whose difficulties have become even more pronounced during the pandemic.

But others wonder whether the new period that starts May 1, with new political leaders, will bring about the change El Salvador desperately needs. During the feast of St. Romero, they turned to him in prayer.

In northern El Salvador, Father Gilberto Robles, pastor of the main Catholic Church in the town of San Fernando, gathered with his flock in a small church in the nearby village of Jesus del Valle to mark the eve of St. Romero’s feast. He addressed a prolonged period of militarization in his parish, which borders Honduras. At first authorities said the soldiers were there to prevent possibly infected people from entering El Salvador through blind spots in the mountainous region and, when more soldiers were sent it last October, the government said the soldiers were there to prevent narcotrafficking.

“It feels as if we’re in a war, not just in a pandemic,” said Father Robles. “We feel controlled, under surveillance.”

With tensions running high, prelates and clergy said the Salvadoran saint should be a symbol of hope for those who feel anguish and uncertainty and urged them to remember that they have an intercessor in heaven.

“St. Romero wasn’t just about homilies,” said Bishop Oswaldo Escobar Aguilar, during a presentation in San Salvador about a book he published on St. Romero. The book chronicles the saint’s visits to the Diocese of Chalatenango, which Bishop Escobar now leads. “He was about people, human rights.”

And now with the 2018 canonization that has led others to learn more about what he stood for, “Romero doesn’t just belong to the Catholic Church, nor to Salvadorans but to those who uphold human rights worldwide,” Bishop Escobar said during a news conference.

San Salvador Archbishop Escobar said St. Romero was a bishop that could only have been “dreamed” out of the Catholic Church’s movements in Latin America of the 1970s — movements that actively pursued the option for the poor, and whose ideals, rooted in the teachings of the Second Vatican Council, remain important today.

“Romero taught us that God walks with us through history,” Archbishop Escobar said. “He put his trust in God. Now it’s up to us to follow through on that great legacy, and we have to transmit the ‘Good News’ to our present time. His example transcends time, giving us ways to incarnate the Gospel in our reality of hunger and thirst for God,” he said.