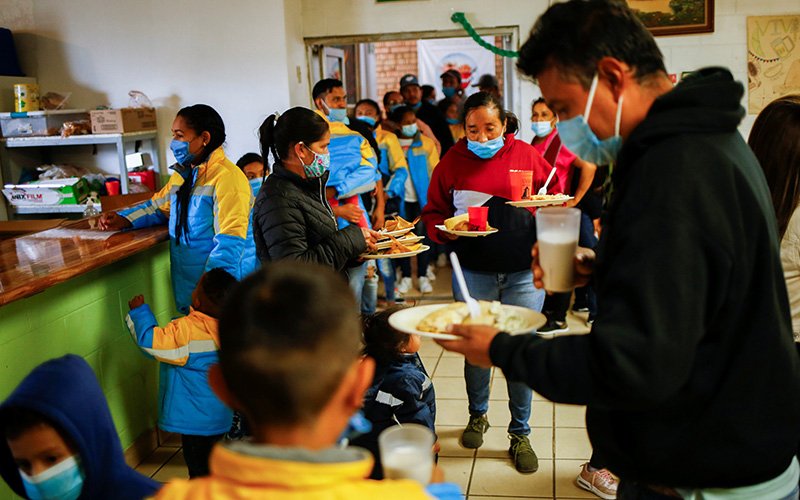 Migrants who were returned to Mexico under Title 42 after seeking asylum in the U.S., receive food during a quinceañera celebration at the Casa del Migrante shelter in Ciudad Juarez, Mexico, Sept. 30, 2021. (CNS photo by Jose Luis Gonzalez/Reuters)

The Trump administration enacted what’s become known as Title 42, saying the Centers for Disease Control had voiced health concerns related to COVID-19, and the Biden administration has continued using it, much to the dismay of immigration advocates.

“A federal court has temporarily failed to block Title 42, a cruel policy that misuses public health to unjustly expel asylum-seekers,” said the American Civil Liberties Union in a Sept. 30 tweet opposing the ruling. “If the Biden administration really wants to treat asylum-seekers humanely, it must end this lawless policy NOW and withdraw its appeal.”

A previous ruling in a U.S. District Court had said use of the provision of U.S. public health law was likely illegal, but the new ruling will allow the administration to keep Title 42 in place while the matter is resolved in the courts.

While the administration said it’s applying the measure, officials at the southern border with Mexico have been allowing some migrants in, although publicly saying that minors and some families are the only ones being allowed to enter the country at this time.

Criticism has been swift from both sides of the political spectrum, with anti-immigration groups calling attention to the masses of mostly Haitian migrants, estimated at 10,000 to 14,000, who ended up under and around an international bridge near Del Rio, Texas, earlier in September, waiting to be let in.

Some were turned away, flown back to Haiti, but others were allowed in.

The CDC in an Aug. 2 statement said that allowing in certain noncitizens, whether they are coming from Canada or crossing into the U.S. at the Mexico border, “creates a serious danger of the introduction of COVID-19 into the United States.”

The White House has said the administration would continue to look to the CDC for guidance on how to proceed.

Catholic bishops and organizations affiliated with the church have repeatedly called on both the Trump and Biden administrations to end to the policy since it was put in place at the start of the pandemic in March 2020.

In June, Washington Auxiliary Bishop Mario E. Dorsonville, chair of the U.S. Conference of Catholic Bishops’ migration committee, called on the government to end “the misuse of Title 42 to turn away vulnerable asylum-seekers” and has continued calling out the administration for its use.