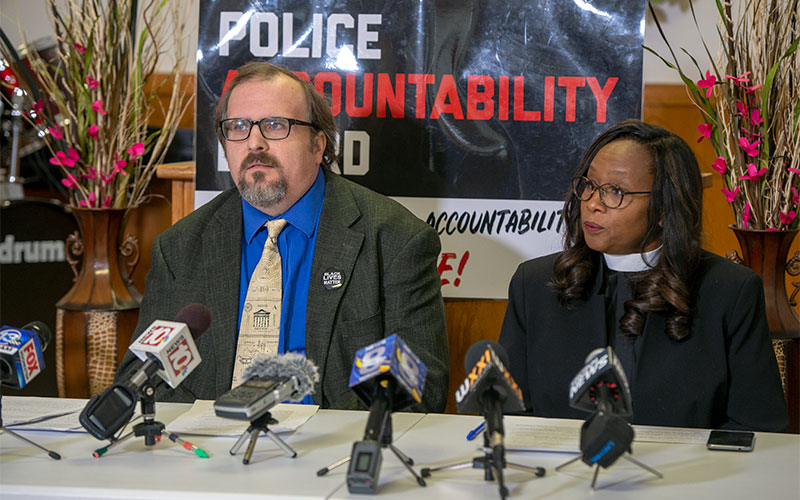 ROCHESTER — Members of a community coalition hope Rochester City Council will act soon on a proposal they helped develop to establish an independent civilian review process for resolving cases of alleged police misconduct.

For the past two years, the Police Accountability Board Alliance — whose members include such organizations as Enough is Enough, Genesee Valley New York Civil Liberties Union and United Christian Leadership Ministry — has been advocating for city council to create an independent police accountability board, said Ted Forsyth, a member of the alliance.

Alliance and council members worked together last fall to draft a proposal for an accountability board, which would be the first of its kind in Rochester, Forsyth said. It would investigate complaints of police misconduct within the city by conducting investigations and delivering disciplinary action.

City council agreed to include in its accountability-board proposal “five pillars” the alliance believes are necessary to ensure accountability, said Forsyth, who added that according to the five pillars, the board would:

1. be an agency separate from the Rochester Police Department;

2. have power to independently investigate complaints of alleged police misconduct;

3. have power to subpoena evidence and witnesses;

4. have power to discipline members of the RPD; and

5. have power to review and evaluate RPD patterns and policies.

City council released its proposal for an accountability board on Jan. 14 on the heels of a separate proposal put forth by Mayor Lovely Warren Dec. 27.

The mayor’s proposal was criticized by members of the Police Accountability Board Alliance, who conducted a Jan. 8 press conference to express their opposition. Forsyth said the alliance believes that the mayor’s proposal — which includes some, but not all, of the proposal the alliance has sought — ignores the demands of the community and alliance members.

Warren’s proposal differs from city council’s proposal in terms of the number of members on the accountability board, the extent of the board’s disciplinary authority and how it would be funded, Forsyth said. In addition, he said the mayor’s proposal did not include all of the alliance’s five pillars.

“The mayor’s proposal voids the extended effort to include the community’s input (in creating a board),” the Police Accountability Board Alliance said in a Dec. 27 press release.

City council held the mayor’s proposal in committee while it finished its own proposal and conducted public forums in January and February to solicit input from the community, Forsyth said. He said community members who attended the public forums seemed to support the council’s proposal, adding that he believes city council leans toward adopting its own proposal instead of the mayor’s.

As of press time March 7, proposals for the accountability board were not listed on the agenda for city council’s March 19 meeting. Forsyth said he believes the proposals could be discussed during city council’s April 16 meeting.