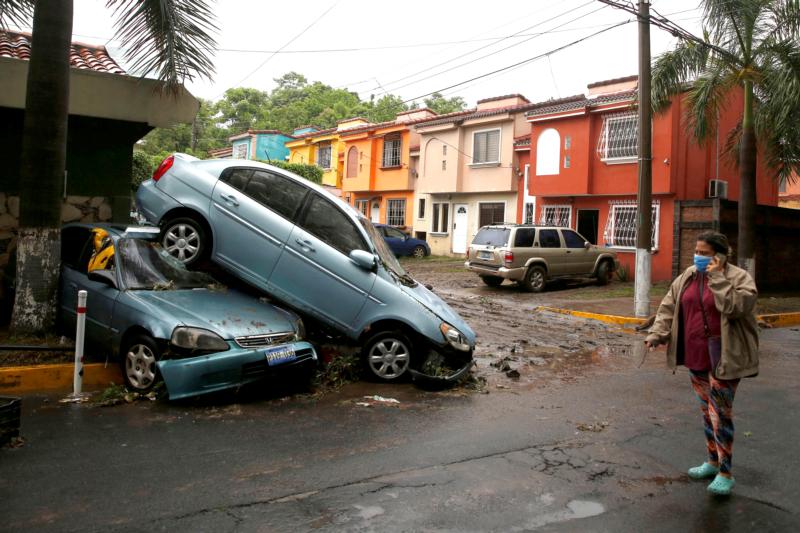 A woman wearing a protective mask walks past damaged cars in San Salvador, El Salvador, May 31, 2020, after Tropical Storm Amanda swept through the area. (CNS photo by Jose Cabezas/Reuters)

WASHINGTON (CNS) — As if battling a pandemic weren’t enough, three of the poorest countries in Central America now are having to simultaneously face the aftermath of strong tropical storms.

As of June 3, at least 28 people were reported dead and many others missing after Tropical Storm Amanda swept into the region May 31, destroying houses, overflowing rivers and wiping away roads, leaving thousands homeless, many of them taking refuge in shelters in El Salvador, Honduras and Guatemala. The region is once again expected to be drenched, this time by Tropical Storm Cristobal, June 6 and 7.

Some of the first victims in El Salvador included an 8-year-old boy who died as the storm toppled one of the walls of his house, a mother who was carried away by raging waters while trying to rescue her two children, and a driver whose taxi was swept away, according to local reports.

Organizations such as Catholic Relief Services face complications in helping the communities because of the ongoing pandemic restrictions set by local governments, limiting movement across localities as a way to stop the spread of the coronavirus.

“We’re still trying to assess the damage. It is still raining and many roads and highways have been damaged,” said Robyn Fieser, regional marketing manager for CRS in Latin America and the Caribbean. “The combination of COVID mobility restrictions and road damage is making access to remote areas difficult.”

Government officials were scrambling to set up shelters for the second storm. Some local Catholic churches shuttered by the pandemic also were providing shelter. But worries remain that with the land already saturated by the first storm and putting people in confined spaces, a larger disaster awaits.

Though El Salvador has had some success in keeping down the number of COVID-19 infections, reporting around 2,700 cases in a population of approximately 6.4 million, some fear the new round of sheltering to protect citizens from the storm will cause the number of cases to skyrocket, collapsing the country’s fragile health care system.

“Our biggest concern is families that have had to evacuate to government shelters in schools and community centers, where they may not have the materials they need to protect themselves from COVID transmission,” said Fieser. “This is coming at a time when COVID infections are accelerating in the country. During the last month, the number of infections has increased fivefold, from 22 cases per day to 110 cases per day.”

The flooding from the storms also has affected the recent planting of crops, now destroyed, which many were counting on for survival.

“This comes at a terrible time, as many farmers had just planted and food security was already a concern,” Fieser said.