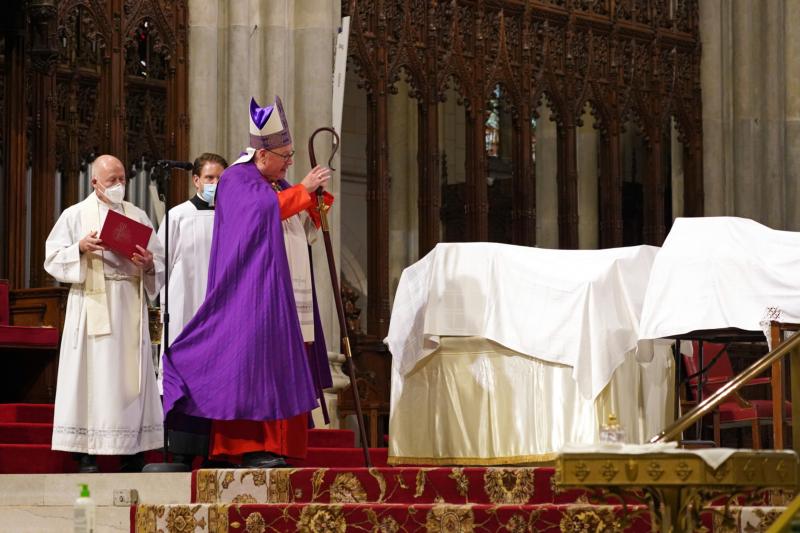 New York Cardinal Timothy M. Dolan leads a July 11, 2020, prayer service at St. Patrick's Cathedral in New York City during which he blessed the cremated remains of 250 Mexicans who had died from COVID-19. The majority of the deceased had been employed as front-line workers in the New York area. The Mexican consulate in New York helped plan the liturgy and arranged for the ashes to be transported by plane to Mexico following the service. (CNS photo by Gregory A. Shemitz)

WASHINGTON (CNS) — Inside New York’s iconic St. Patrick’s Cathedral, some 250 Mexican nationals were hailed as anonymous heroes July 11, after dying of COVID-19, which they likely contracted as they kept the city moving when it was experiencing the peak of the pandemic earlier this year.

Their cremated remains were blessed at the cathedral and, via an arrangement with the Mexican government, were sent to Mexico later that day to be received by family.

“When the pandemic (in the New York City area) was at its peak, they never ceased working,” said Jorge Islas Lopez, consul general of Mexico in New York, speaking of the deceased to the press after the service.

Though anonymous, some of the immigrants had worked to keep New York’s hospitals clean as medical staff struggled to save lives, Islas said, while others kept the food supply or necessary construction moving.

“Today, we lovingly take them to Mexico, their earthly home, and we pray so that they will live forever in their true celestial home,” Cardinal Timothy M. Dolan of New York said during the service in Spanish.

He blessed their ashes covered in white on the main altar as mariachis played traditional Mexican songs in the background.

While speaking to the press, Cardinal Dolan explained he was hoping to have brought some comfort to the migrants’ families so they would know that their loved ones had received God’s blessing.

“These families suffered because they were unable to be with their loved ones at the time of death,” he said.

But some friends and family were present for the service at St. Patrick’s, wiping tears and holding pictures of their loved ones in the pews. Others watched the blessing of the ashes via Facebook Live, where the service was livestreamed by the Mexican Consulate in New York, and they left messages in the comments section.

“Goodbye, my brother. I am not at the Holy Mass but you are in my heart. I love you always,” wrote Clemencia Bravo.

“May your soul rest in peace, Teresa Romero,” wrote Jafed Fer Dax. “We love and miss you in your beloved Huamantla.”

“Uncle Alfredo, may God keep you in his glory,” wrote Jonathan Lopez.”We will always remember and miss you.”

“Many of them died alone because they did not have family here,” said Islas, the consul general, addressing the press. “That’s why it’s important that they return with the utmost dignity and decorum, an utmost respect that the faithful should be given.”

In a news release, the Archdiocese of New York said the consul general had helped organized the service for those who had not been able to have a funeral Mass and burial at the height of the pandemic in the city.

“The Catholic Church shows care and reverence for the earthly remains of those who have died by insuring a proper, dignified repose of earthly remains,” the statement said. “This is so important that it is considered to be one of the corporal works.”

Burying the dead is one of the seven corporal works of mercy, part of the teachings of Jesus practiced by Christians as a model for how to treat others. Others include feeding the hungry and giving alms to the poor.