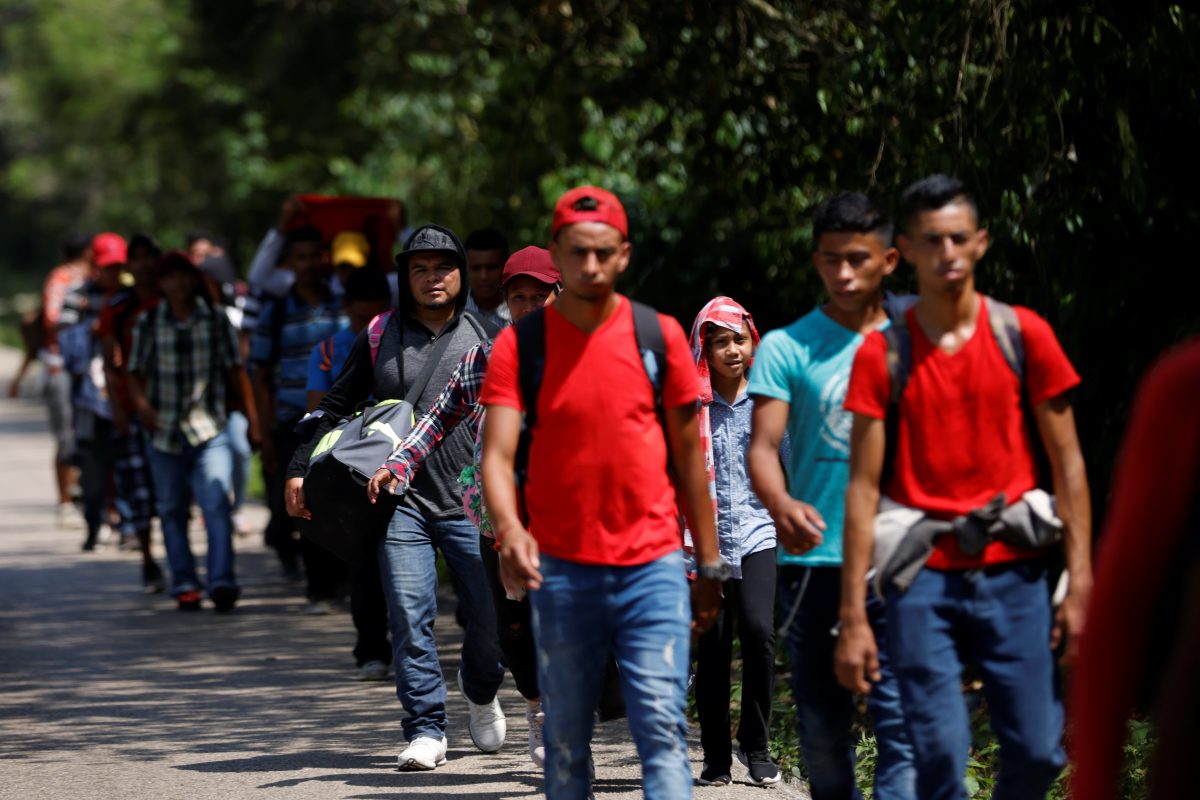 A group of young Central American migrants walk along a highway in Palenque, Mexico, March 28, 2021, on their way to seek asylum in the United States. (CNS photo by Carlos Jasso/Reuters)

PALENQUE, Mexico (CNS) — The Mexican bishops’ migrant ministry says people are arriving at the U.S.-Mexico border with illusions of easily entering the United States, but they risk being returned to Mexico under rules for expelling people rapidly during the pandemic.

In a four-page statement issued March 26, the migrant ministry said the situation is creating bottlenecks along the northern border as migrants, encouraged by stories of possible U.S. policy changes, are unable to apply for asylum and resort to crossing illegally into the United States.

The surge of migrants through Mexico has strained Catholic-run shelters, which are operating at limited capacity due to COVID-19 precautions. Donations have dropped due to the pandemic, the statement said.

“We look optimistically on the new migration policies being implemented by the present United States government,” said the statement, signed by Bishop José Guadalupe Torres Campos of Ciudad Juárez, who oversees the migrant ministry.

“We know these processes take time … and we hope that legislators allow the implementation of policies proposed by President Joe Biden,” the statement continued. “(But) these policies have caused too much optimism in the migrant population, who are hopeful of being able to soon enter the United States and are mobilizing in various countries, especially in Central America and Mexico.”

Ever-increasing numbers of migrants — including many unaccompanied minors — are arriving in the United States, even though the Biden administration has told migrants to stay put for the time being and says it is deporting single adults and families.

Unaccompanied minors are not being deported, Biden told reporters in a news conference. But neither are many families, according to The Washington Post, which reported 60% of “family units” — made up of at least one parent and one child — detained by U.S. officials are remaining in the United States.

Some families detained along parts of the border cannot be returned to Mexico due to Mexico lacking space, the result of a new law prohibiting children being held in Mexican immigration detention centers.

The bishops’ ministry said the government “had not anticipated in advance” spaces for sheltering unaccompanied minors and families with children prior to changing its law. Mexican immigration officials routinely ask the shelters to house child migrants and families “without any support on the part of the federal government,” according to the statement.

The shortage of space for minors is so severe that Sister Pascuala Chávez Medina, coordinator of a migrant shelter in Palenque, in southern Chiapas state, says she receives calls from as far away as Mexico City from immigration officials looking for places to house child migrants.

“I tell them that there’s no space and I don’t have the infrastructure necessary for adolescents, especially those in situations of risk,” said Sister Pascuala, one of the Daughters of Charity of St. Vincent de Paul tending to the migrants passing through Palenque.

The Palenque shelter has filled up routinely to the point many solo male travelers are forced to sleep on the sidewalk outside and only receive meals and limited assistance.

“The only ones able to enter are women, minors and the sick. That’s the priority,” Sister Pascuala said, adding that since mid-March, the number of families arriving has declined for reasons she could not explain.

Many of the migrants arriving in shelters in Mexico report fleeing poverty, violence and the aftermath of twin hurricanes destroying Central America.

There is also the belief in Central America “that entry (into the United States) is very simple, especially if they come with families,” said Alberto Xicoténcatl, director of the migrant shelter in Saltillo, in northern Mexico, where he estimates the flow of migrants is four times the normal numbers.

The migrant ministry statement said, “Human traffickers trick migrants, assuring them that they can enter the United States and request asylum, something which is not true.”

“It’s a strategy they use … to get more customers.”

With migrants arriving at the U.S.-Mexico border in record numbers, the Biden administration is resorting to an old tactic: asking Mexico to play the role of enforcer.

For the first time during pandemic, on March 19, Mexico announced restrictions on travel at its southern border due to COVID-19. The same day, it revealed a deal with the United States to receive 2.7 million doses of the AstraZeneca vaccine, something leaders in both countries called unrelated to any action against migrants.

The increased enforcement measures, the migrant ministry said, “have considerably increased the trafficking of persons by organized crime” along with activity by other groups “who look to capture migrants for their businesses (such as sex work) or to kidnap them.”