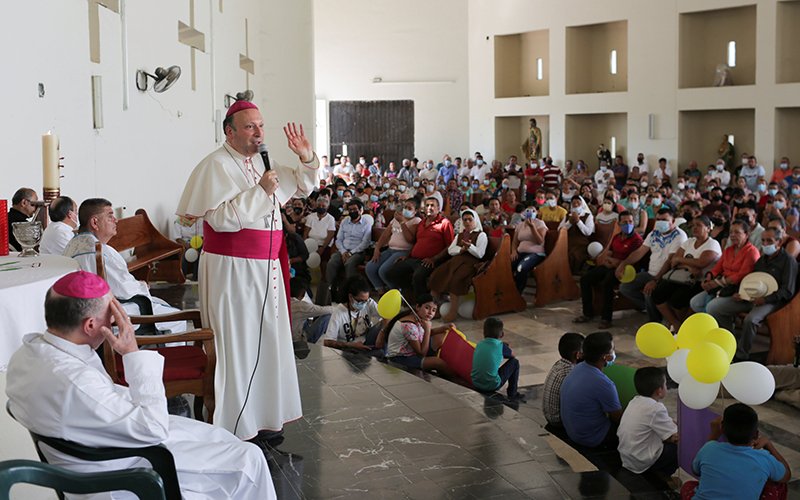 Bishop Cristóbal Ascencio García of Apatzingán, Mexico, seated, looks on as Archbishop Franco Coppola, apostolic nuncio to Mexico, speaks to residents during a visit to Aguililla April 23, 2021. Bishop Ascencio has said that in politics, "There's a struggle for power, a power that brings unjustifiable enrichment." (CNS photo by Alan Ortega/Reuters)

MEXICO CITY (CNS) — The Mexican bishops’ conference has pledged to avoid promotion of any parties or candidates in the country’s upcoming midterm elections. The bishops also issued a statement May 6 calling on citizens to vote and support candidates promoting the common good.

But at least one bishop in a diocese with drug-cartel conflicts has expressed dismay with the campaigns, saying the common good isn’t being pursued by politicians in his corner of the country. He also warned of winning candidates entering potentially impossible situations in which organized crime wields control — not the duly elected officials.

In a May 6 statement, the bishops said Mexicans must “show discernment with the goal of opting for the people who can bring about the authentic common good.”

“If we have advanced in the democratic culture, we must eradicate attitudes such as apathy and indifference as well as avoiding that any person or group try to manipulate citizens in the exercising of their votes through pressure, giveaways or blackmail,” the statement continued. “Today, more than ever, the common good demands more actions the words.”

The same day, in a discussion organized by the Archdiocese of Mexico publication Desde la Fe, Bishop Cristóbal Ascencio García of Apatzingán said, “There will be elections because the system requires them, but, personally, I’m increasingly disappointed by the day with the elections.

“It seems that the sense of exercising politics as service has changed,” he added. “There’s a struggle for power, a power that brings unjustifiable enrichment.”

Mexico holds midterm elections June 6 and picks governors in 15 states. The election comes in the midst of a pandemic and slumping economy, but has been of the utmost importance for President Andrés Manuel López Obrador, who wants to maintain a majority in the lower house of Congress.

Polls show the president’s MORENA party leading comfortably — the product of López Obrador’s popularity and a lingering dislike of the opposition parties, which were repudiated in 2018 after several disappointing terms in office — but it’s uncertain how many seats MORENA could claim.

López Obrador has caused some concern in Mexico as he attempts to centralize power in the presidency and attempts to exert influence of the judicial branch and the country’s autonomous agencies.

He also has endorsed several polemic candidates, including gubernatorial candidates in the states of Guerrero and Michoacán who were disqualified by the country’s electoral institute for not filing expense reports. The president has subsequently launched scathing attacks on the institute, formed to oversee free and fair elections in a country with a history of questionable vote outcomes, and the president promises to overhaul or eliminate the institute should his party win enough seats.

“These elections have shown a desire for power at all costs” by going against the electoral institute, Bishop Ascencio said. “Perhaps … we are not in a true democracy, and we’re heading toward a dictatorship disguised as a democracy.”

Bishop Ascencio’s diocese has been hit hard by drug cartel violence, something highlighted by a recent visit to the besieged town of Aguililla by Archbishop Franco Coppola, apostolic nuncio. The bishop expressed bewilderment at a mayoral candidate in Michoacán appearing on the Drug Enforcement Administration’s wanted list.

“In my diocese … it’s very likely there’s complicity between organized crime and those exercising political power,” Bishop Ascencio said. “They have told me that they’re overwhelmed by the crime situation and security is not their duty; it’s something for the federal government.”

In this election cycle, the bishop said more candidates have sought him out for meetings than in past years. He notices that “they haven’t taken reality into account.”

“What’s not seen is that power in not in the hands of legitimate rulers,” he said. “Power in many places is held by organized crime. It seems like the political sector is at the service of organized crime.”