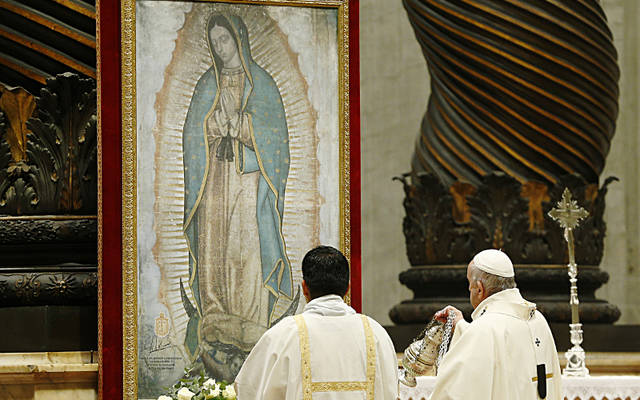 MEXICO CITY (CNS) — The Latin American bishops’ council announced plans to perform an act of consecration of Latin America and the Caribbean to Our Lady of Guadalupe on Easter, “asking her for health and an end to the pandemic.”

The consecration will take place at noon April 12 behind closed doors at the Basilica of Our Lady of Guadalupe, but it will be transmitted digitally.

Cathedrals and parishes throughout the region will participate by ringing their bells 12 times as a call to prayer.

CELAM, as the Latin American and Caribbean bishops’ conference is known, said a Mass would be followed by recitation of the rosary and act of consecration for an end to COVID-19. The ceremony will include presentation of a floral wreath in the place where, in 2016, Pope Francis prayed silently to Our Lady of Guadalupe for the world.

“We trust that as we contemplate the mother of the true God, through whom we live, we will strengthen our faith, nourish our hopes and commit ourselves with solidarity and love to those who are experiencing illness, pain, poverty, loneliness, fear and worry,” read the statement, signed by Archbishop Miguel Cabrejos Vidarte of Trujillo, Peru, president of CELAM, and its secretary-general, Auxiliary Bishop Juan Carlos Cardenas Toro of Cali, Colombia.

“This present time demands of us as pastors to see and listen to the afflictions of our peoples, generating hope and turning our sights toward our mother in heaven,” the CELAM statement said.

The COVID-19 pandemic reached Latin America and the Caribbean later than other parts of the world, but has resulted in a rising number of infections, along with quarantines and closed borders. Churches throughout the region have suspended public celebrations of Mass, along with parish services, although priests and religious are mobilizing responses to the many often-poor communities enduring orders to shelter in place.

Past popes have declared Our Lady of Guadalupe “patroness” and “empress” of the Americas. She also has been relied upon in times of pandemic as early as the 1700s, according to Rodolfo Soriano-Nunez, a sociologist studying the Catholic Church in Mexico.

The consecration, he said, “is a way to renew the relationship (with Our Lady of Guadalupe) and seek her protection. … It is a way to entrust the continent to the Virgin Mary’s protection.