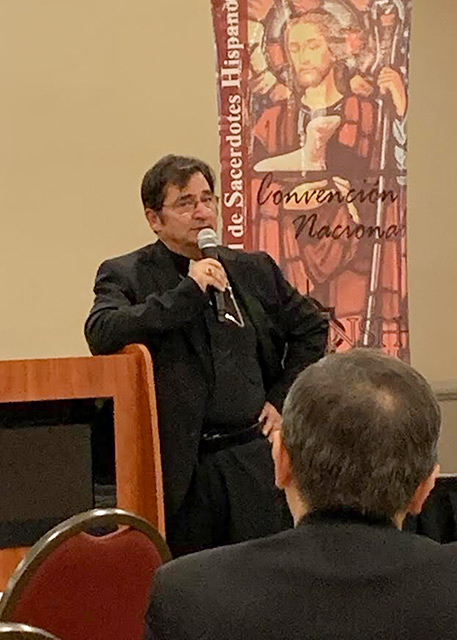 Bishop Joseph J. Tyson of Yakima, Washington, speaks Oct. 7, 2019, about the need to serve the poor during the 30th annual convention of the National Association of Hispanic Priests in New York City. Priests from across the country attended the Oct. 7-10 gathering, discussing topics such as the need of fraternity and care among their peers and also the need to tend to those who are suffering in their home parishes. (CNS photo/Jhon Guarnizo, courtesy Asociacion Nacional De Sacerdotes Hispanos) See LATINO-PRIEST-GATHERING Oct. 29, 2019. Editor's note: Best image available.

WASHINGTON — At a meeting for Latino priests, gathered clergy spoke of the need to look out for one another as brothers and affirmed the need to walk with the poor.

When the National Association of Hispanic Priests — ANSH for its acronym in Spanish — met in New York Oct. 7-10, priests from across the country discussed topics such as the need for fraternity and care among their peers, and also tending to those who are suffering in their home parishes.

Referencing the Letter to the Hebrews, Auxiliary Bishop Octavio Cisneros of Brooklyn said a priest is chosen from among men to serve the people, yet priests also are human and have qualities and defects, as other human beings do, but a priest is called to walk with his people until the person’s final destiny. But a priest also is part of that group of people and must feel as one of them, he said.

Only if a priest feels part of the church, he can walk with confidence, he said. A priest can’t enjoy the beauty of the church if he feels like the center of everything, he added, and a priest can’t be a priest without being close to people. Jesus is the best example of this, he said.

When a priest heads out looking for his own interests, he can become distant from the people of God, he said.

But a fraternal environment is key in preventing this and brother priests also must be part of serving and caring for one another, sharing experiences, sorrows, successes, nostalgia and doubts that pop up in life, which helps them be better servants, the bishop said.

The necessity of having a brother priest who is a friend is essential and while having laypeople who are friends is beneficial, they likely won’t tell priests what they need to hear. Listening to one another is essential and learning that everyone is in need of something is an important lesson for priests, he said.

Bishop Joseph J. Tyson of Yakima, Washington, also spoke of the need to serve the poor and the role priests play in that important mission of the Catholic Church.

“You with your lives are writing the pages of the priestly life,” he said, and supporting others, particularly the poor and afflicted, and accompanying them is essential for those who feel alone, discarded or discounted by society.

Bishop Tyson said poverty has a face and it’s more than a topic of conversation or a problem to solve. The poor are not strangers but are brothers and sisters, members of the human family present in cities and towns and who lack basic necessities such as food, a home, health care and educational opportunities, he said.

In his Diocese of Yakima, the poor share stories of hunger, pain, abandonment, with honesty and openness, he said.

Panelists urged prayers for those seeking to end the cycle of poverty and for public officials charged with carrying out economic justice. But in the meantime, they urged those who attended to remember their role as leaders, supporting and encouraging people, being part of a dynamic church on the move.

The gathering marked the organization’s 30th annual convention, titled this year, “Time for Priestly Reform and Renewal.” Organizers said it was “part of a three-year program for renewal, fraternity and continuing education of priests working in a variety of ministries in dioceses across the country.”

Along with Bishops Cisneros and Tyson, Auxiliary Bishop Jorge Rodriguez of Denver and Bishop Misael Vacca of Duitama-Sogamosa, Colombia, also attended the convention.

Bishop Cisneros received the Good Shepherd Award at the national level and Msgr. Robert T. Ritchie, of New York, received the same award at the diocesan level, “in recognition of their work among Hispanics.”

The organization, made up largely of diocesan but also some religious clergy, estimates there are about 2,000 Latino priests around the country, and anyone interested in joining can visit its webpage at www.ansh.org, said Father Molina.

In addition to the convention, the organization also hosts two annual retreats in Spanish, he said.