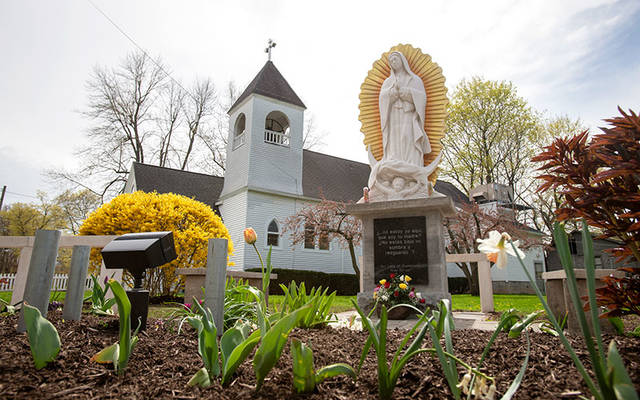 In-person Spanish-language Masses have resumed at Mission of Our Lady of Guadalupe in Marion. (File photo)

After two months of attending Spanish-language Masses online, Hispanic parishioners in the Diocese of Rochester can once again attend liturgies in person.

Last month, as part of the New York Forward Plan, houses of worship were permitted to resume public liturgies with occupancy restrictions and while adhering to social-distancing and sanitizing requirements.

Since March, the diocese’s Office of Pastoral Services has been using its migrant-ministry website to refer members of the migrant communities in Brockport and Cayuga, Livingston, Ontario, Wayne and Yates counties to prerecorded Masses in Spanish on the ministry’s YouTube channel.

“For the reasons of the quarantine, it seemed to (the migrant ministry team) that making Masses available in Spanish was an appropriate way to create a space of prayer relationship with the communities that our diocesan ministry serves in every Latino migrant community of the diocese,” said Father Jesús Flores, diocesan coordinator of migrant ministry. He noted that Spanish Masses will no longer be recorded but are still available to view online now that public worship has resumed.

In-person Spanish-language Masses for the migrant community are available at Mission of Our Lady of Guadalupe in Marion on Sundays at 2 p.m., St. Frances de Sales Church in Geneva on Sundays at noon, and Nativity of the Blessed Virgin Mary Church in Brockport on Sundays at 1:30 p.m.

Additionally, work is being done to add a 7 p.m. Thursday Mass at Mission of Our Lady of Guadalupe to accommodate an additional 100 parishioners weekly, Father Flores added.

A Spanish language Mass also is being celebrated at the Tepeyac Welcome Center in Leicester every fourth Saturday of the month at 2 p.m, he noted.

To avoid confusion and overcrowding at the church sites, staff members are reaching out to parishioners ahead of time to assign them days on which they can attend Masses, Father Flores said.

Meanwhile, in the City of Rochester, public Masses resumed the weekend of June 13-14 at Holy Apostles Church, according to Father Anthony Mugavero, pastor. Spanish-language Masses take place Sundays at 11:30 a.m.

Given the amount of physical distancing that is required, space in the church may not be adequate for in-person Spanish-language Masses, Father Mugavero added, noting that anyone arriving after a Sunday Spanish Mass is filled to capacity will be asked to come to the Tuesday evening Spanish Mass at 7 p.m. instead.

“We know that this will be far from perfect, but we will learn as we go, as it is a process,” he said.

And for the time being, St. Frances Xavier Cabrini Parish in Rochester will continue to stream its Spanish-language Masses on Sundays at 11 a.m. via Zoom through a link sent to parishioners ahead of time.

EDITOR’S NOTE: Click here for more information about Mass locations and times in the Diocese of Rochester.