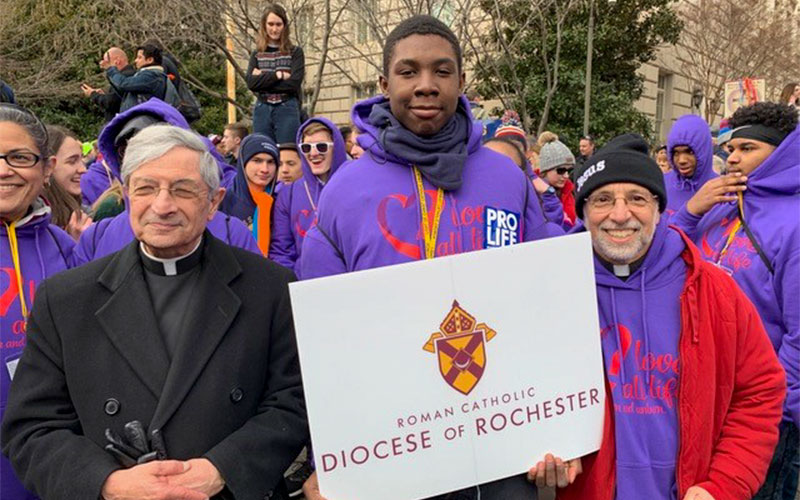 “I wanted to be an advocate for unborn children,” said Gina DeJesus.

The freshman at Our Lady of Mercy High School was one of 40 individuals to board a bus in Rochester to travel to Washington, D.C., Jan. 22-25. The trip — organized by Father Anthony Mugavero, pastor of Holy Apostles Church — included participation in the annual March for Life Jan. 24

For 14 years, Father Mugavero has invited young people from different city parishes to join him on this pro-life journey. The trip is made available to students in grades 8-12 from Holy Apostles as well as the St. Frances Xavier Cabrini Parish. This year the invitation was extended to students who attend St. John Bosco School in East Rochester.

In addition to participating in the March for Life Jan. 24, the young people took part in youth rallies featuring prayer and Christian music and celebrated Mass at the Basilica of the National Shrine of the Immaculate Conception. These annual events mark the anniversary of the Supreme Court’s 1973 Roe v. Wade ruling that legalized abortion in the U.S.

Father Mugavero told El Mensajero Católico that the excursion is made possible through funds from various donors throughout the year, but it is primarily made possible from donations made by different priests and deacons. Travel preparations are made with a travel agency, Father Mugavero said, which ensures that bus transportation, lodging and tickets for other events in Washington are secured ahead of time.

Prior to departing, Father Mugavero said he speaks to participating youths about the pro-life motivation behind the trip by asking them to imagine themselves from conception to birth.

“I talk to them about themselves, but I put them in the process of growth as a human being, beginning with conception, and then I talk about what they are at different stages, what they’re doing during those stages, and then I tell them a story,” he said.

The story, which Father Mugavero calls “Mr. Truth and Mr. Lie,” touches on how pregnancy and abortion are viewed in American culture.

“Ultimately, the truth represents God,” he explained, “but I always use that the truth is in terms of facts; in the meantime, the lie is all the things we hear in the news.”

American culture can portray pregnancy as being a burden in certain situations and that abortion is the only solution, but that doesn’t mean it is, Father Mugavero added.

Gina told El Mensajero Feb. 19 that she did not know much about the topic of abortion until she participated in the 2019 March for Life.

“I started to learn more about what was actually going on, what it was these doctors were saying to these young women as they were having the abortion,” she said.

While participation in the march made an impression on her, Gina said that the most impactful event for her took place after the march, when she heard testimonials of women involved in the Silent No More campaign through which women and men share their abortion testimonies.

“I think it’s amazing to see how after abortions, women go through a period of silence or period of self-harm, and how they are overcome by it, and then overcome it by finding God,” she said. “By finding God, they are able to talk about their hardships and what they went through after the abortion.”

After listening to the speakers, the Rochester group walked back to the bus, had dinner and took the opportunity to do some sightseeing, like visiting the Lincoln Memorial and the National Museum of African American History & Culture the following day.

Father Mugavero said he feels hopeful in the education the students acquire by participating in this type of immersion experience.

And Gina expressed an interest in participating in the trip next year and in future years.

“I think it’s a great opportunity to learn more,” she said.