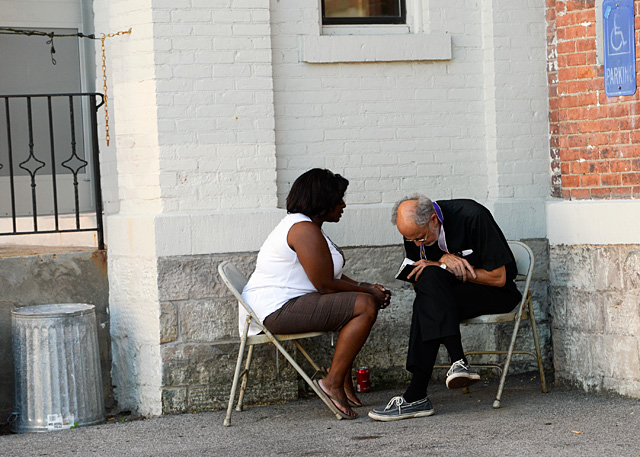 Father Bob Werth listens to Jvelisse DeJesus during an outdoor confession which is part of the annual Santa Misión 2016 for the Latino community at St. Michael Church in Rochester, Monday Aug. 8.

ROCHESTER — If you have Christ in your heart, you will be destined for greatness.

That was the central message of Deacon Juan Carattini’s presentation during the first night of the annual Santa Misión held Aug. 8-10 at St. Michael Church.

Deacon Carattini works in the Diocese of Brooklyn and volunteers in jail ministry at Rikers Island.

As he stood on a makeshift stage Aug. 8 at the corner of North Clinton and Clifford avenues, Deacon Carattini said he wanted the whole neighborhood to hear his proclamation: "It doesn’t matter what state your life is, God loves you."

The first night of the outdoor mission held in St. Michael’s parking lot also focused on the youths who are part of the Latino faith community, noted Lynette Saenz, director of the diocesan Office for Cultural Diversity. The first night’s songs and homilies were bilingual to involve as many young people as possible, she said.

In her first time attending the mission, Shakira Díaz, 16, took on an active role with other youths from St. Frances Xavier Cabrini Parish, which comprises St. Michael, Our Lady of the Americas and Annunciation churches. During a skit they performed before Deacon Carattini preached, she played the character "Dr. Pega Pega," who caught every ailment each patient came in with but still offered each person medicine for healing. Its message was to demonstrate how God always has his way of healing everyone, she said.

Shakira said she felt good about the skit and was glad she took part in the mission.

"I wanted to be more part of the church community," she added. "And I really love it (the mission)."

Bishop Salvatore R. Matano, who stopped in to the mission at its onset to bless participants, said it was a great joy to have so many young people before him.

"My message is very simple: Jesus died on the cross for us because he loves us and he wants us all to share in his life, but people do things to destroy that life," he said. "Life isn’t hopeless, is it, in any circumstance, is it, because Jesus is always with us. Never ever forget that. Jesus is always with you. That’s why we’re here in this place. He loves us and he loves all people if we only come to him."

Deacon Carattini also was impressed by the participation of the children and teenagers who performed the skit, as well as led the rosary and line dances Aug. 8. When Deacon Carattini was their ages, he said he was on a different path. He focused on partying with his friends until he landed in the hospital for weeks from respiratory failure triggered by an asthma attack, he said.

God intervened, though, during that difficult time in his life, Deacon Carattini said. A nun at the hospital would not relent in her visits to his room until he accepted her invitation to attend Mass in the hospital chapel, he said.

Following the Mass, the priest prayed over him and he was able to stand up from his wheelchair and walk back to his room. A short time later, his doctor attributed his improvement to the medications. But he knew differently, said Deacon Carattini.

He had been healed by God physically and spiritually, he remarked.

Many people find themselves in situations where they also need such healing, he said. But they don’t always choose to turn to God when they most need spiritual healing, which was the theme for this year’s mission, he added.

Saenz said the Year of Mercy influenced the choice of the mission’s theme.

Deacon Carattini’s experience of mercy in the hospital turned his entire life around, he said, and fulfilled the prayers of his parents, who had always hoped he would come back to the church.

So, he urged the parents among the more than 200 people gathered before him to never abandon their children and to always listen and be there for them.

He also wanted the youths at the mission to serve as agents of evangelization whenever possible, he said.

"Never be ashamed to be God’s children," he told the youths.