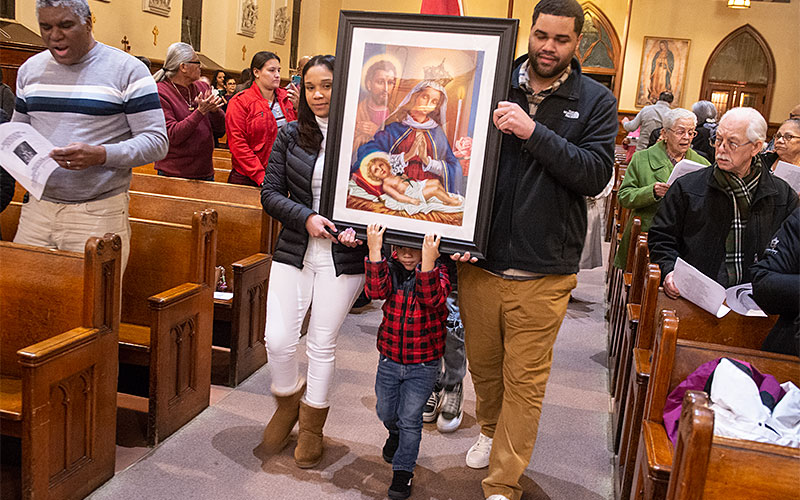 Marvin Cepeda (center), with the help of Marvin and Emily Cepeda, carry an image of Our Lady of Altagracia as they process into Mass Jan. 21 at Holy Apostles Church in Rochester. (EMC photo by John Haeger)

ROCHESTER — In the mid-1990s, a small group of parishioners at Holy Apostles Church wanted to organize a celebration honoring the feast day of Our Lady of Altagracia, the protectoress of their native Dominican Republic.

Twenty-five years later, more than 100 people attended the Jan. 21 feast day Mass at the church on the evening of Jan. 21. The liturgy opened with the hymn “Llévame a Jesús” (“Bring Me to Jesus”), which was sung by the parish’s five-woman choral group. They were accompanied by parishioners playing such traditional Latin instruments as the güiro.

In his homily, Deacon Jorge Malavé spoke about Jesus coming to Earth and the important role Mary had in ensuring Jesus was born.

“‘I am the Lord’s servant’ is what Mary had replied when the Angel Gabriel approached her to tell her she would give birth to Jesus, the Son of God,” he said. “With God, there is everything, but not without Mary having given birth, which is the reason we are gathered here to celebrate today.”

The Mass also featured Deacon Agenol Rodríguez, who offered the prayers of the faithful, and Father Tony Mugavero, pastor of Holy Apostles, who was the celebrant and gave the final blessing.

The feast day concluded with children bringing flowers to an altar featuring an Our Lady of Altagracia statue while guest singer Carmen Olmo, a parishioner of St. Michael Church, sang “Quisqueya,” a traditional song about the Dominican Republic.

Following the Mass, a reception took place in the church’s Mother of Theresa Center.