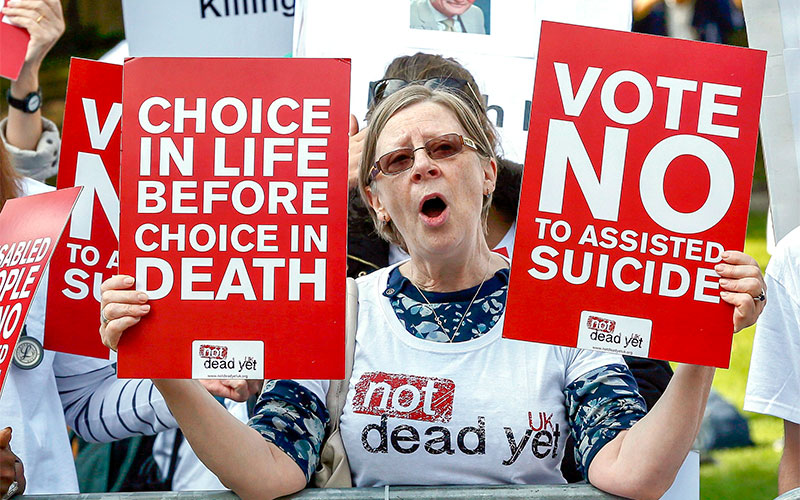 A demonstrator against assisted suicide joins a protest outside Parliament in London Sept. 11, 2015. On March 21, the professional body for doctors in the U.K. dropped its traditional opposition to assisted suicide, in spite of a poll that found that a majority of its members remain opposed to the practice. (CNS photo/Stefan Wermuth, Reuters) See BRITAIN-ASSISTED-SUICIDE-PHYSICIANS March 21, 2019.

Many rightly are still in anguish and continue to experience great upset over the recent passage of the Reproductive Health Act, which I noted in an earlier article, this legislation has detrimental consequences even beyond the unborn child, extending to pregnant women, allowing non-doctors to perform abortions and permitting abortions for any reason in the third trimester of pregnancy right up to a mother’s due date. It removes our state’s protections for infants born alive in the course of an abortion.

Many of the faithful of this diocese and beyond have written to me, expressing their sorrow as they see God’s gift of life so overshadowed by the negative effects of this legislation. As a diocesan family, we best respond to this sad episode in the life of our state by assuring all who come to us with difficulties during pregnancy that they have our support as we encourage them to welcome their children into the world. We welcome those who have undergone the trauma of the termination of life in the womb to receive the healing and consolation of the church, a loving mother who embraces her children in all the difficult moments of our lives. Thus, I have asked all our diocesan agencies to cooperate with our pro-life office to create a true culture of life; that this be a concern of all our offices so that life at every stage is reverenced; and that the agencies of Catholic Charities continue to reach out to our sisters and brothers who struggle with life issues.

Our work has only just begun. As we deal with one issue threatening life, we are now confronted with new efforts to legalize euthanasia in New York state. In my January 2016 statement regarding physician-assisted suicide, I wrote: “The precious life of the new-born child is the same precious life of the old and the frail, the weak and the suffering, the ill and the infirm, the distraught and the sorrowful. As we care for the child so must we care for all persons in the vast spectrum of human life. When we subjectively determine when life begins and ends, when it is viable or not, or when it is too burdensome to endure, we begin a path toward self-destruction. Life is no longer precious, but just another commodity in the business of living. Relativism becomes the absolute, and even the value of life itself is questioned.”

One wonders what has changed? In 1994, Gov. Mario M. Cuomo’s Task Force on Life and the Law released a report (https://www.health.ny.gov/reg ulations/task_force/re ports_publications/when_death_is_sought/) unanimously rejecting assisted suicide and cautioning: “No matter how carefully any guidelines are framed, assisted suicide and euthanasia will be practiced through the prism of social inequality and bias that characterizes the delivery of services in all segments of our society, including health care. The practices will pose the greatest risks to those who are poor, elderly, members of a minority group or without access to good medical care. The growing concern about health care costs increases the risks. This cost consciousness will not be diminished, and may well be exacerbated, by health care reform.” In September 2017, the New York State Court of Appeals decision, Myers v. Schneiderman (https://law.justia.com/cases/new-york/court-of-appeals/2017/77.html), stated: “In any event, the State may permissibly conclude that an absolute ban on assisted suicide is the most reliable, effective, and administrable means of protecting against its inherent dangers.”

The New York State Catholic Conference, in opposing assisted suicide, has stated: “Rather than assisting suicide, government should be consistent in its efforts to prevent suicide. It is illogical for the state to promote/facilitate suicide for one group of persons — calling the suicides of those with terminal illness, and a specific prognosis ‘dignified and humane,’ while recognizing suicide as a serious statewide public health concern in all circumstances, and spending enormous resources to combat it. We urge the state to remove barriers and improve access to palliative care and hospice care for those in the final stages of terminal illness. Improved education and training of physicians in pain management, together with appropriate diagnosis and treatment for depression, would go a long way toward eliminating calls for suicide among the sick and dying” (Memorandum of Opposition, January 23, 2017).

Allow me to repeat once again what I stated in my January 2016 statement on this very serious issue: “The Catholic Church, united with persons of other faiths and people of good will, does care, especially for those who are the weakest among us! And our concern is not irrational. It is a very reasonable and noble concern, which appreciates the worth of the human person in his or her most difficult moments of life. In 2011, the United States bishops stated: ‘Respect for life does not demand that we attempt to prolong life by using medical treatments that are ineffective or unduly burdensome. Nor does it mean we should deprive suffering patients of needed pain medications out of a misplaced or exaggerated fear that they might have the side effect of shortening life’ (‘To Live Each Day with Dignity: A Statement on Physician-Assisted Suicide,’ USCCB, July 2011, p. 10, http://www.usccb.org/issues-and-ac tion/human-life-and-dignity/assisted-suicide/to-live-each-day). The New York state bishops, in their 2011 ‘Catholic Guide to End-of-Life Decision-Making, Now and at the Hour of Our Death,’ note that ‘out of deep respect for the gift of life, we must always accept, and others must provide, ordinary medical means of preserving life. Ordinary means are those that offer us a reasonable hope of benefit and would not entail excessive burden on us, our family, or the community’ (p. 3, http://www.nyscatholic.org/wp-content/uploads/2011/11/End-of-Life-booklet-final.pdf). But intentional euthanasia, the willful and conscious act of putting to death those who are sick, are disabled, or are dying, is morally unacceptable and a tragic offense against life!”

Has so much really changed that we no longer trust in the Providence of God? Are we unable to care for our suffering sisters and brothers with faith in Jesus? What do we mean when we pray the Our Father saying: “Thy will be done on earth as it is in heaven”? Our Blessed Mother Mary stood firmly beneath the cross of Christ and allowed nothing to deter her from her place with her Son until He breathed His last in fulfillment of the Heavenly Father’s will. Mary treasured her Son’s life in her heart and trusted always in the Providence of her Son, which allowed her to behold the empty tomb, the promise of eternal life become reality; even at Golgotha she became the Mother of Hope.

This is the very hope that the Risen Christ places in every heart; it is also the hope of the sick and dying, a hope that proclaims that their lives are precious even in the most fragile moments. It is hope that carries us over the threshold from this life into eternal life according to God’s will, as our dying brothers and sisters repeat the words of Jesus uttered close to His death upon the cross: “Not my will, Father, but your will be done.” More than ever, we need to defend life, protect life, reverence life. Euthanasia places our loved ones in a hopeless state when we should be placing them in God’s hands, echoing the words of Christ on their behalf: “Into your hands, O Lord, we commend our loved ones.”

More than ever we need the hope of Easter! On Monday of Holy Week, April 15, the shocking news was heard throughout the world that Notre Dame Cathedral in Paris was engulfed in flames. This magnificent cathedral, which has kept vigilance over the people of Paris and beyond for more than 800 years, which has borne testimony to the faithful who used their gifts and talents to raise up a structure to the glory of God, was severely threatened. Reports on the fire called the cathedral the heart and soul of Paris, of France, with its spire reaching into the heavens. Here heaven and earth have met, with Notre Dame reflecting the beauty of God’s children, recalling gifts of the faithful and the contributions of the artists and laborers who became the instruments of Christ in praising the heavenly Father. Immediately the faithful gathered and began to sing hymns to Mary, Our Mother, Notre Dame. Even in the sight of enormous flames, the soul and heart of the cathedral were living and breathing through the hearts of the faithful who were breathing with the heart and soul of Our Beloved Savior, the true heart of the Cathedral of Notre Dame. The flames raged as Easter was on the horizon, the celebration of Christ conquering even death itself, the great feast of hope. And now there is hope that Notre Dame will be restored. The hope and faith that built Notre Dame are the hope and faith that will rebuild Notre Dame!

But just as people were dealing with the tragic fire of Notre Dame, news was received that on Easter day itself there were horrendous bombings of Catholic churches, others of all faiths and of nearby hotels in Sri Lanka. In this instance, once again we are confronted with an example of wanton disregard for the sanctity of life and the presence of evil seeking to destroy a culture of life, leaving in its path broken hearts on the very day we celebrate Christ’s glorious Resurrection. With our sisters and brothers in Sri Lanka, we unite in prayer for those whose lives were lost and the families who mourn their death.

Amid these multiple tragedies, the heart and soul of Christ can never be destroyed; even in the most desperate situations, Christ lives and breathes among us. The voices raised in prayer throughout the world for the people of France evidenced the transcendent nature of Notre Dame; now the prayers of our sisters and brothers in Sri Lanka echo the only real hope for the world, Jesus Christ! Notre Dame, the churches of Sri Lanka, St. Sebastian’s in Negombo, St. Anthony’s Shrine in Colombo and Zion Church in the eastern city of Batticaloa are not tourist sites or museums, they too are Houses of the Lord where countless prayers have been offered for every conceivable need of God’s people, who continue to hope in Jesus. “This evil cannot overcome the hope found in our Savior’s Resurrection” (Statement of Daniel N. Cardinal DiNardo, president of the U.S. Conference of Catholic Bishops, April 21, 2019).

Invoking the intercession of Our Mother Mary in this month dedicated to her, I remain, with an assurance of my prayers,