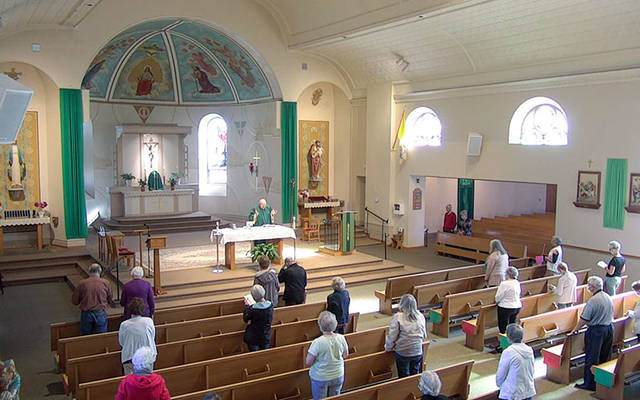 Many parishes in the Diocese of Rochester have begun or are planning to begin celebrating Masses at up to 25-percent of church occupancy. Houses of worship were permitted to return to public liturgies at this level — while adhering to social-distancing and sanitizing requirements — as of June 7 under Phase 2 of the New York Forward plan.

At Holy Apostles in Rochester, celebration of Masses at 25 percent capacity began June 13-14, said Father Anthony Mugavero, pastor. Information regarding such safety guidelines as using hand sanitizer or washing hands upon entering the church were emailed and sent to parishioners, he added.

Members of the same household are permitted to sit next to one another, Father Mugavero said, with parishioners adjusting themselves accordingly so they are six feet away from the last person in a group. With the physical distancing that is required, the church should offer enough space to accommodate worshippers at English-language Masses, he said. However, space in the church may not be adequate for Spanish-language Masses, Father Mugavero said, noting that anyone arriving after a Spanish Mass is filled to capacity will be asked to come to the Tuesday evening Spanish Mass instead.

Parishioners also will be invited to listen to Mass from a speaker outside and then receive Communion at the appropriate time, or be encouraged to come to daily Mass.

“We know that this will be far from perfect, but we will learn as we go, as it is a process,” Father Mugavero said.

In northern Tompkins County, Father Daniel Ruiz noted that the three churches where he serves as pastor — All Saints in Lansing, Holy Cross in Dryden and St. Anthony in Groton — was to begin offering Masses with the 25-percent limit June 16.

Father Ruiz explained that beginning to implement this policy on a weekday — when congregations are smaller than for weekend Masses — will allow the three churches to gradually adapt to new routines.

Father Ruiz noted that the parish opted to wait 10 days after the 25-percent limit was announced so that the staff would have more time to notify parishioners who don’t have computer access to the cluster’s bulletin, website, email and social-media updates. He added that a reservation system for weekday and weekend Masses will remain in place after June 16, with a capacity of 85 people at All Saints, 75 at Holy Cross and 65 St. Anthony.

Fifty-eight people attended daily Mass at Holy Trinity Parish on June 8, the first day the parish began offering Mass for up to 25 percent of the Webster church’s occupancy. The pastor, Father Timothy Horan, and Holy Trinity’s staff had previously created a set of policies and procedures designed to keep parishioners safe and help them adhere to social-distancing requirements, and everything ran smoothly that first day, remarked Helen Sleeman, Holy Trinity’s ministry coordinator.

The June 8 Mass served almost as a trial run, Sleeman said, helping parish staff determine which new procedures worked well and which would need to be tweaked before the parish welcomed potentially larger crowds to weekend Masses June 13-14.

Parishioners planning to attend a weekend Mass at Holy Trinity will be asked to fill out a Google form on the parish website indicating which Mass they plan to attend and whether they will attend in a family group, but will not asked to provide their names. This system will allow parish staff to better prepare for crowds at each Mass, but is not a requirement or a reservation, Sleeman said.

Ushers will seat parishioners as they arrive. The parish staff determined that under social-distancing guidelines, each pew can hold either three individuals, two couples or one family, and an empty pew will be left behind each occupied pew.

Tape markings on the floor and red and green signs have been added to help ushers and parishioners alike know where to go and how to move around the church. Colorful flyers explaining the new procedures for such matters as seating, dismissal and the reception of Communion have been posted on the parish’s website and Facebook page, and emailed to parishioners, Sleeman said.

These measures also will be mentioned briefly before the start of each Mass, Sleeman said, “just so folks aren’t caught off guard and they can put their energy towards our worship time and not be focused on what’s new.”

At Peace of Christ Parish in Rochester and Irondequoit, weekday Masses with up to 25 percent capacity began June 9, although weekend Masses with those attendance limits won’t start until June 20-21.

“We will welcome people back and give them whatever directions are needed so they feel comfortable understanding what we are doing and how, in order to be in compliance with all guidelines,” said Father Robert Schrader, pastor.

To ensure the safety of everyone in attendance, Father Schrader said parishioners will be required to wear masks. Other safety guidelines being implemented include taped-off pews and lines on the floor to ensure six feet of social distancing of six feet can be observed, he told the El Mensajero, and the parish has adjusted its procedures for distributing Communion, collecting offerings and distributing bulletins.

There will be no hymnals, missalettes or other paper items in church, the pastor noted, adding that music will be primarily instrumental or by sung by a cantor.

Like many other parishes, Good Shepherd Catholic Community in southern Cayuga County has revised its Mass schedule in order to accommodate the 25-percent occupancy limit and maintain six feet between parishioners from different households at all times. It also has decided not to open one of its four worship sites, St. Michael Church in Union Springs, for weekend Masses at this time, according to a June 8 letter to parishioners from the pastor, Father William Moorby.

“Since St. Michael Church is small and more difficult to have people sit six feet apart from each other we will not have Mass there for the time being,” Father Moorby wrote.

Good Shepherd’s other worship sites — St. Patrick in Aurora, Our Lady of the Lake in King Ferry and St. Patrick in Moravia — resumed public Masses June 13-14, just in time for the liturgical feast day celebrating Jesus’ real presence in the Eucharist.

“It is so fitting that we are resuming public Masses on the solemnity of the Most Holy Body and Blood of Christ,” Father Moorby wrote.

The parish has not yet set a date for the resumption of daily Masses.

Parishioners coming back to Mass will find a number of new policies in place, he continued. All parishioners over the age of 2 must wear masks.

At the conclusion of Mass, parishioners will be asked to remain in their seats until a minister tells them they can leave, so as to preserve social distancing as the congregation exits the church. And parishioners are asked to forgo gathering after Mass and head straight to their cars. Restrooms will be not be open before, during or after Mass due to the difficulty of maintaining social distance and rigorous, frequent cleaning, Father Moorby wrote.

“As we go forward I am counting on everyone to work together to provide as safe an environment as possible when we resume public Masses,” he wrote. “Our practice might be different but the Real Presence of our Lord will be the same and will give all the opportunity of receiving the Lord in the Eucharist.”