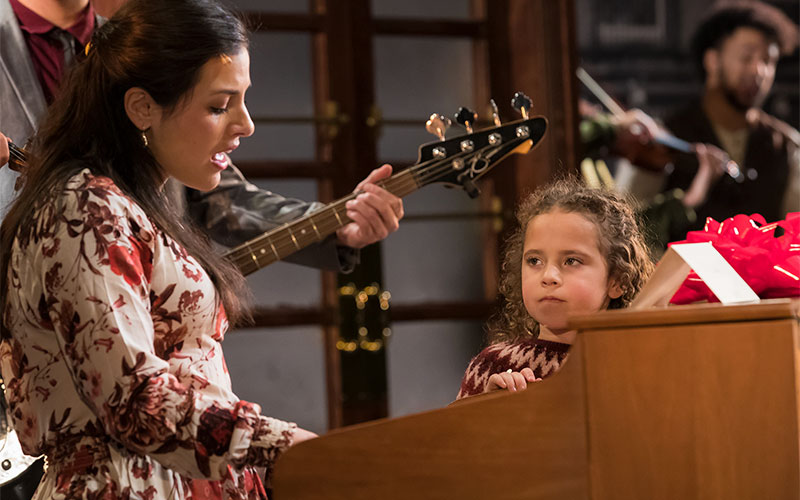 Five-year-old Kennedy Kleps performs in Geva Theatre’s production of “Once,” which opened in late February and runs through March 22. (Photo courtesy Geva Theater)

WEBSTER — Kennedy Kleps is an entertainer.

Her resume includes an appearance on the runway during Rochester Fashion Week 2018, a part in the Rochester City Ballet’s 2019 performance of “The Nutcracker,” and a small role in Geva Theatre’s production of “Once.”

And Kennedy is only 5.

“She has always been an entertainer,” remarked Kennedy’s mother, Diana Kleps. “I have so many videos from when she was 18 months old, even 2 years old, just dressing up … and just dancing and performing.”

“I always run it by her and ask, ‘Is this something you want to do?’ If she says yes, we try it,,” explained Kleps, who belongs to St. Rita Parish in Webster along with Kennedy, husband Tom and son Tommy.

Before each audition, Diana and Tom Kleps remind Kennedy that she very well may get the part, but there’s also a chance she won’t get the part, even though she may want it. It’s OK to be sad if that happens, the Kleps tell their daughter, but that doesn’t mean she should give up.

“You’re not always going to get certain things you want, but you just keep working hard and maybe something else will happen,” Diana Kleps said.

The three appearances Kennedy has earned so far have provided opportunities for Diana and Tom Kleps to teach both Kennedy and Tommy about the meaning of commitment.

“Once you start something, you have a commitment, so it’s not OK to let people down once you start,” Diana Kleps said.

Kennedy’s current commitment will keep her busy through March 22. She and another little girl are sharing the role of Ivonka, the daughter of the lead female character in Geva’s production of “Once,” which opened in late February. Kennedy said she is enjoying her role so far, although one of her favorite parts is not visible to the audience.

“I have my own dressing room!” the outgoing 5-year-old excitedly explained to El Mensajero Católico.

The dressing room houses Kennedy’s costumes, which include a pair of comfy yellow pajamas and a sequined long-sleeve shirt with black tights and a pink skirt. Pink is one of Kennedy’s favorite colors, along with purple, gold and teal.

Kennedy also is partial to flamingos, ice cream and tacos. The latter is probably not surprising given her heritage, noted Diana Kleps, who moved from the Dominican Republic to New York City when she was a child. Kennedy’s maternal grandparents live in the Dominican Republic, and the Kleps family travels there to visit frequently.

Diana Kleps’ mother also comes to Webster for several months each year to spend time with her grandchildren. She doesn’t speak English, but Kennedy can communicate with her because she is learning to speak and read Spanish as well as English.

“I mean, it’s half of who she is,” Tom said, noting that his daughter’s Spanish-language skills come in handy when his mother-in-law comes to visit. “I don’t speak Spanish. Sometimes (Diana’s) mom will talk to me as if I understand it, and I really don’t. … I”ll say, ‘Kennedy, what did Mama say?’ And she’ll tell me.”

When she’s not performing or visiting family in the Dominican Republic, Kennedy’s life looks much like that of any other 5-year-old. She loves learning new songs and playing with her friends in preschool at St. Rita School. Diana Kleps, who frequently volunteers in Kennedy’s classroom, said her daughter especially enjoyed making valentines with her classmates to give to nursing-home residents.

The school’s focus on service fits in well with the Kleps family’s own values. On Christmas Eve, the family delivered gifts to eight families in need, and they regularly volunteer at Sojourner House in Rochester.

“It’s important to us to instill in them the importance of giving and helping others,” Tom Kleps said.