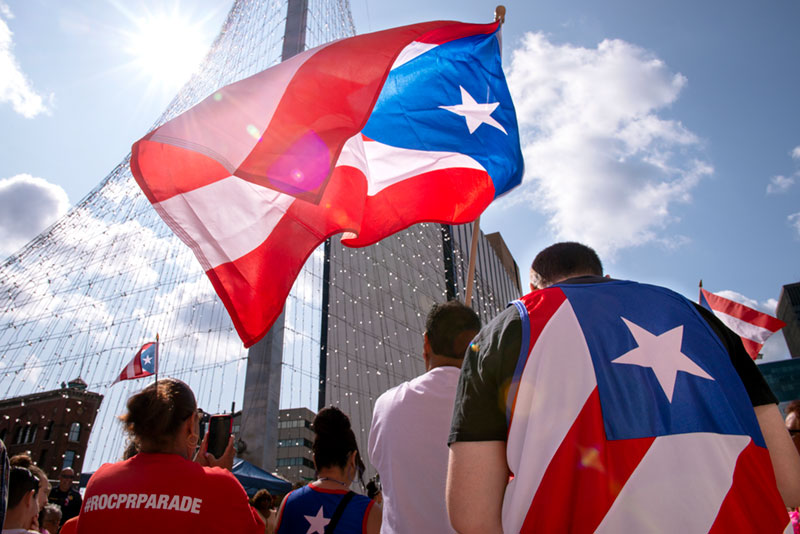 A crowd gathers near the Liberty Pole in Rochester for the opening ceremony of the Puerto Rican Parade July 28, 2019.

The longest-running cultural festival in Monroe County is celebrating its golden anniversary this year.

The 50th-annual Puerto Rican Festival will take place Aug. 16-18 at the Frontier Field VIP parking lot in Rochester. According to the City of Rochester, the event is the county’s longest-running cultural festival and draws an average daily attendance of 7,000 people.

Each year, the festival celebrates Puerto Rican culture through musical entertainment, children’s activities and such traditional foods as pinchos (large skewers of meat and vegetables), yellow rice topped with a variety of meats, and large, fried empanadas.

Orlando Ortiz, president of the festival, told El Mensajero Católico in May that Puerto Rico’s El Gran Combo will be performing on the last day of the festival and that other artists will be announced in the coming weeks.

According to the festival’s website, prfestival.com, opening ceremonies will take place at 4 p.m. on Friday, Aug. 16, with the annual Puerto Rican Parade taking place on Saturday, Aug. 17.

According to the parade’s website, www.rochesterpuertoricanparade.com, a parade commencement ceremony will take place from 10 to 10:45 a.m. at the Liberty Pole in Rochester on Aug. 17. During the ceremony, the Father Laurence Tracy Excellence in Leadership Award will be presented to a community leader.

The parade, whose theme is “The Borinqueneers,” will begin at 11 a.m. at Liberty Pole Way. It will proceed south on Franklin Street, west on Main Street to North Plymouth Avenue, north on North Plymouth Avenue and end at Morrie Silver Way, according to the parade website.

The Puerto Rican Parade has taken place in Rochester since the 1970s and was modeled after the first Puerto Rican parade that took place in New York City in the late 1950s, according to information on the Rochester parade’s website.

New York City’s first Puerto Rican Parade took place on Fifth Avenue in Manhattan in 1958, one year after the repeal of Public Law 53. Established in 1948, Public Law 53 also was known as La Ley de la Mordaza (Gag Law), according to attorney Nelson A. Denis, who published The War Against All Puerto Ricans: Revolution and Terror in America’s Colony in 2015.

“Law 53 made it a felony to sing a song, whistle a tune, or utter one word against the US government, or in favor of Puerto Rican independence,” Denis wrote.

Following economic changes on the island and the passage of legislation in 1917 that made Puerto Ricans U.S. citizens, Puerto Ricans began to migrate from the island to the mainland United States.

Following the growth of both the celebration and Puerto Rican population, the festival has since changed. For the last 25 years, it has been a three-day celebration with an entry cost of $10 per day. However, there are opportunities for families who may not be able to afford the fee; admission is free from noon to 2 p.m. on Aug. 16 and 17.