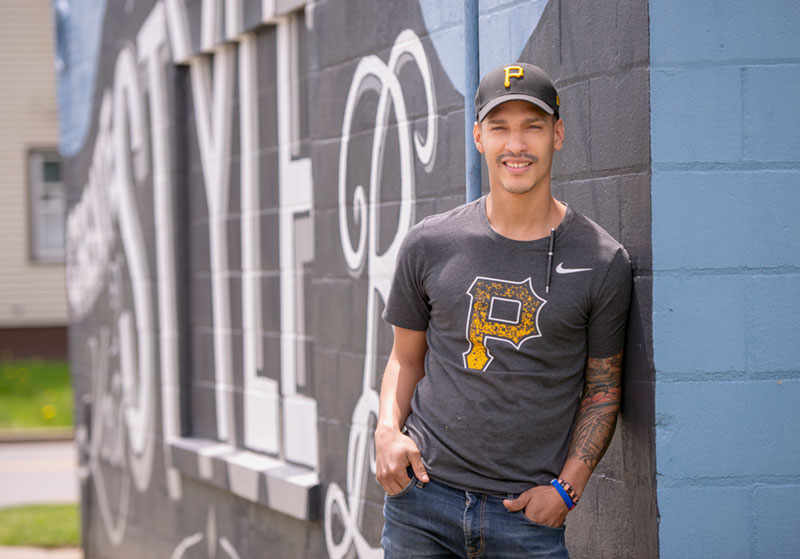 Santos Cruz is heavily involved in Rochester's Puerto Rican community, including work for Ibero and RHYBL.

Santos Cruz knows well what it’s like to face challenges in life.

In 2001, Cruz and his siblings came to Rochester with their mother, who was fleeing a domestic violence situation in Puerto Rico. Cruz was 8 at the time.

For the first five months of living in Rochester, the family stayed in numerous shelters for battered woman before finding a permanent place to live.

Cruz credits Ibero-American Action League with being the first local community organization to help his family.

“Ibero was one of the first organizations my mom worked for when we first got here. I have photos of my siblings and me at the Early Childhood Center on 77 Clifford. Ibero was really influential in my family’s life as we grew up,” Cruz told El Mensajero Católico in early May.

He went on to graduate in the top 10 percent of his class at East High School in 2010 and is now a Rochester firefighter. He works 12- to 16-hour shifts three days a week and fills his time off by being a coach for the Rochester Hispanic Youth Baseball League. After three years of coaching the 4 to 6 division team, The Pirates, Cruz became vice president of the league in May.

The successes of adulthood, however, did not make Cruz forgot the challenges he faced early in life. Due to those childhood experiences, he wanted to ensure that young Latinos facing similar challenges would receive the same opportunities for guidance and assistance that he had received while growing up.

Cruz dreamed of creating an organization — Young & Empowered — through which he would connect Latino youths and young adults for mentoring opportunities. His sister, Juliana, often was a listening ear as he developed his vision for the organization.

“One of our big passions was talking about this organization, which would focus on helping young Latino professionals by providing them with the resources to overcome their circumstances and environment,” he said.

So in 2016, Cruz created two Facebook pages, Young & Empowered and Young and Empowered Latino, through which he offers information to connect young people with community resources.

Despite Juliana’s death in a car accident in August of 2016, he pressed on with his work.

“I really wanted to help in the community,” he said, noting that he has been motivated to work with a variety of local organizations so he can learn about the programs offered in the city. Through that work, he also hopes to connect with individuals and groups to help provide resources for Young & Empowered.

“The whole point of Young & Empowered was to connect youths to resources, but how was I supposed to do that if I didn’t have the resources to give them?” he remarked.

Since creating Young & Empowered, Cruz has been able to connect individuals with the Black Physicians Network of Greater Rochester Inc. and the Rochester Latino Theatre Co.

Additionally, Cruz continues to make connections in the community. He volunteers with Ibero’s PODER Radio station as a comedian and was in charge of marketing efforts for the Rochester Puerto Rican Parade for the past two years.

Cruz also has become involved in the ¡No Mas! movement in Rochester, which he discovered through Facebook. ¡No Mas! members gather in the form of a human chain to protest drug use in northeast Rochester neighborhoods.

The drug situation came to affect RHYBL practices at Don Samuel Torres Park, Cruz said, as the park was constantly littered with used needles. He and his fiancé, Katelyn Figueroa-Plonczynski, would go to the park before his team’s practices would start so they could pick up the needles.

Cruz said he hopes he can do more to help ¡No Mas! through his connections with RHYBL, which now has moved practices to Baden Park. He also wants to further inform himself about organizations like ¡No Mas! that are working to fix problems in Rochester.

“I am looking to be a part of the solution,” Cruz said.