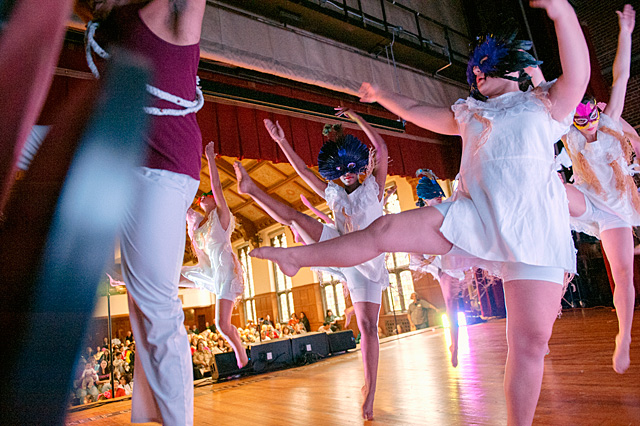 ROCHESTER — While many Latino artists and community leaders are thrilled to see a boom in theater and dance, some still clamor for having a louder voice in the arts community at large.

The glory days of a Puerto Rican Arts and Cultural Center could be resurrected, say local artists like Agustin Ramos and Hector Arguinzoni. It would take time, commitment and money, Ramos said, but as the Latino population continues to grow, the next evolution of such a center could be a natural progression. Former Puerto Rican Arts and Cultural Center recalled

A Latino Cultural Center could become a showcase for the diversity of the population and its arts, noted Ramos, who teaches dance through Flower City Tango and was one of the directors of the Puerto Rican Center in the 1970s.

Creating such a Latino cultural center locally was in fact attempted several years ago, explained Henry Padrón, a poet and musician who helped lead that effort. He also is a teacher at James P.B. Duffy School No. 12.

"I didn’t think we’d establish a new cultural center," he said of the effort. "I wanted to plant a seed and get the ball rolling."

Resurrection of such a center would require yearlong support, and it could not rely on grants only as the Puerto Rican Arts and Cultural Center did, agreed Ramos and Padrón.

"This (effort) would take also visionaries and administrators to be successful, not just artists," Ramos said.

"My dream for the future would be a Latino museum that would teach, incorporate all of our cultures, basically all of our arts, dance, music, history and feature the artists who are well-known … and include also writers," he added. "This center would not only exhibit the Latino community as an arts community and its culture, but inspire new Latinos that are growing up here to have a place to call their own and be proud of. We have a lot of Puerto Ricans here who have never been to Puerto Rico. Growing up in the Anglo culture, the only (Latino) culture they have is heritage of their grandfathers."

As the Hispanic population inches closer to becoming 30 percent of the U.S. population in the next three decades, the writing is on the wall for a continued explosion of Latino influences in all arenas, local community leaders say.

While such mainstays as Borinquen Dance Theatre and Orquesta Antonetti continue to survive, new groups have popped up in dance and theater in recent years. They include the Rochester Latino Theatre Co.(RLTC), Essence of Rhythm, Latino Theatre Productions, Avenue D Recreation Dancers, Latinos de Corazon and Papalotl Mexican School of Dance.

Three Latino plays also were part of this year’s Fringe Festival shows. Elena Goldfeder, a longtime actress, playwright and now producer with Latino Theatre Productions, played a role in "Chocolate Casiamargo," one of the plays presented during the Fringe Festival.

The bilingual play written by Nazareth College professor Candide Carrasco illustrates how Latinos are constantly bridging the gap between two cultures, she said.

"I think that we’re coming into our own now and after all the assimilation and living in two worlds, really, the Latinos are beginning to realize that we indeed have a richness of literature in terms of the theater — both from Spain and the New World that has not been tapped in the states yet," she said in an e-mail. "But, with more and more people realizing that Spanish is our number two language here, and that we’re the largest minority, it’s beginning to happen that the Latinos are attending and supporting the arts. … Little by little, we’re seeing that we do have a wonderful culture that does include theatrical works never before experienced by the Anglos."

"We want to be more present in the diversity of art that there is," noted Stephanie Paredes, cofounder and board president for Rochester Latino Theatre Co. "We have painters and wonderful dancers. And with theater now, we’re trying to expand the level of ability of talent we have in different arenas. We want to be represented not just for dancing but other parts too. We’re giving people the opportunity to express themselves in so many different ways. That is the exciting part."

Jay O’Leary portrays an American soldier stationed in Iraq during the Rochester Latino Theater Company’s production of "W.A.C. Iraq" Sept. 20 at the Rochester Association of Performing Arts theater. The play was performed twice as part of the Rochester Fringe Festival.

Rachel DeGuzman, president and chief executive officer of 21st Century Arts, shares in that excitement. But she also wants more Latinos to be represented in the larger community arts organizations.

"There is a resurgence of art being produced by people of color; a resurgence of art in general," said DeGuzman, who has hosted symposiums focusing on different areas of diversity in the arts. "We also are very culturally rich. We have a lot of formal institutions being established by people either who have been transplants or have lived here that’s creating some exciting work. … (But) I don’t believe they’re being adequately supported."

DeGuzman questions how sustainable a new arts organization, like the theater companies, would be when faced with a "diversity desert" in the audiences.

"If you go to events in Rochester, they are typically all white, all black or all Latino," she explained. "And I’m not talking about what’s on stage. I’m talking about audiences. Why is this so?"

She believes this happens because meaningful relationships between arts organizations — large and small — are not taking place.

"We do have a problem with the diversity in the arts in Rochester that we need to address. The browning of America is real. The browning of Rochester is happening at a slower pace than in California, but it’s still happening. If major institutions want to survive and thrive, they don’t have a choice, and part of that (answer) is having part of leadership be diverse."

Non-Latino arts organizations do need to pay attention and address the needs of this population, said Eric Vaughn Johnson, business manager and program director for the Rochester Association for Performing Arts (RAPA).

By joining forces with RLTC, RAPA was able to put on larger shows such as "In the Heights" and the upcoming "West Side Story" in Rochester, he explained. Such collaborations also ensure authenticity and broaden the arts landscape in Rochester, Johnson added.

The new Latino theater companies are in step with what is happening nationally as a Latina/o Theatre Commons formed in 2012 and has grown to 50 practitioners from around the country, according to howlround.com. The organization is holding its first encuentro (encounter) later this fall with a goal of "promoting the breadth of Latino/a theatre across the nation and re-imaging the American dramatic narrative."

"We’re still young and we’re growing, but we have a great foundation and we want to play with big kids too," said Paredes, who is the multicultural student life coordinator at Rochester Institute of Technology. "We want to sit at those tables. Because the Latino community in Rochester, we are a market here too. … (And) we bring community resources and cultural knowledge."

Rooted in the past

Perhaps the Latino voice in the arts that was so loud in the days of the Puerto Rican center had quieted because the community had become complacent, said Arguinzoni, an artist who has done set design for many local shows as well as Puerto Rican Parade floats. He also served as a former director of the Puerto Rican Arts and Cultural Center.

"We have to make it happen," he said of leading the way in the arts.

Carmen Fernández-Teremy said that the former arts center showed that Latino artists were capable of being a major draw and recalls when musicians from Puerto Rico performed with the Rochester Philharmonic Orchestra. Music is central to Latino culture

"The reason we had so many wonderful things happening and were bringing new things to the community, things never seen before or things we’d like to see again, is we had very good communication between the top organizations that were established — Eastman, the philharmonic, Geva," said Fernández-Teremy, an Eastman School of Music graduate. "You can reach many more people if you can entice other people to join you."

Goldfeder also recalled her involvement in the first Hispanic Theatre Festival at SUNY Brockport and later plays with Blackfriars Theatre in the 1980s.

"I think that we, as any other group, like seeing that we’re not invisible, that we do indeed exist in both worlds of English and Spanish and that we thoroughly enjoy seeing and hearing our language on stage," she said. "It’s a reinforcement of who we are that can never be taken away from us."

Continuing to promote that Latino voice to the younger generation is vital to the success of any new artistic endeavors, said Ramos.

That connection to the arts "would do wonders about the self-esteem of the community, especially this new generation," he added. "The only thing they have is salsa and rappers they see on TV and regatton but comes from a rich history of music they’re not aware of."

"We are responsible for documenting our community, our heritage," Arguinzoni said. "No one is going to do it for us."