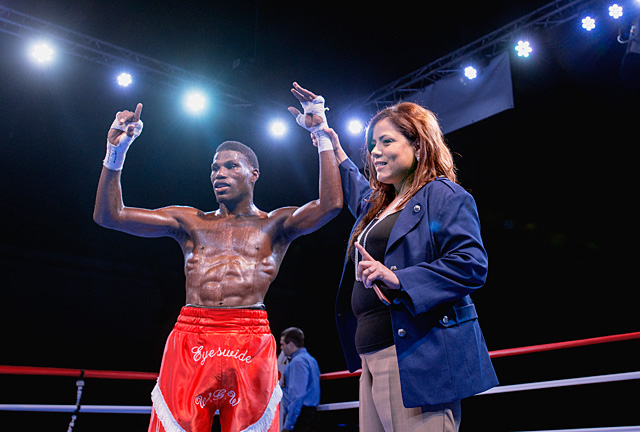 Boxing promoter Mercedes Vazquez-Simmons raises the hand of a winning boxer during the Throwdown at the Armory II put on by Pretty Girl Productions Aug. 23 at the Main Street Armory in Rochester.

ROCHESTER — Mercedes Vázquez-Simmons is a woman who works tirelessly not only to make a better life for her family but to better her community.

"She is always working to better her position and better the people around her," said Tim Darling, vice president of operations for her boxing promotions company, Pretty Girl Productions. "She cares about everyone. If she can bring you along for the ride, she will. She’s very uplifting, encouraging and hardworking."

That strong work ethic, spirit of service and leadership skills were all lessons learned at the hands of her mother, Belen Colón, said Vázquez-Simmons.

But Vázquez-Simmons said that it took her a while to go from being the shy girl, tucked behind her mother, to finding her own voice. Becoming a dancer and running for and becoming Miss Puerto Rico of Rochester in the late 1980s, though, helped her come out of her shell and taught her other life lessons, she noted.

"You need to make an impact, always hold the Latino culture in high regard," she said she also learned at a young age. "You should be proud to be a Puerto Rican."

In addition to being the only Latina, she is currently the only licensed female promoter of boxing in all of New York state, said Scott Burt, coordinator of the Bare Knuckle Boxing Hall of Fame in Belfast, Allegany County.

Earlier this summer, the hall named her "Person of the Year."

Vázquez-Simmons was an easy choice to honor at the event, which was a tribute to women in boxing, Burt added.

"That, coupled with her hard work and constant desire to promote boxing in general and constant striving to put on top-notch events made her rise head and shoulders above others in the running for this year’s honor," he said.

"The mere fact I’m a female, that just blew my mind," Vázquez-Simmons said of her award, adding that she was humbled and ecstatic to receive it. "What an experience. I’ve had a great year. People think I came out of nowhere. I’ve been doing this a while. It just so happens now everyone is catching on. It’s great to hear people talking about boxing again in western New York."

Colón said that she is happy that people are talking about her daughter, for whom she had prayed for God to bestow blessings upon.

"She has accomplished a lot," Colón added. "She has helped many people. … She has been a fighter since she was born, fighting for a better life."

Her mother and other women have served as mentors throughout her life, so being honored in a tribute to women made the award even more significant, said Vázquez-Simmons. Alongside her mother, she also worked on the mayoral campaign for Nancy Padilla, who was another important role model.

Being part of an effort to help another Latina affirmed lessons her mother had taught her about being proud of one’s culture. Annual trips to Puerto Rico to visit family cemented those values, said Vázquez-Simmons.

Vázquez-Simmons also learned the value of education and has imparted that to her own son, Taylor, who will be a junior at School of the Arts. She also graduated from the School of the Arts in 1989, and then went on to Buffalo State College for a brief stint. Upon returning to Rochester, she went to Monroe Community College and eventually received a bachelor’s degree in business from Rochester Institute of Technology in 2009. Two years ago, she earned her master’s degree in business administration from Medaille College.

She began working in 1992 at Rochester Telephone Co. While finishing school, she continued working there as it evolved into Frontier Telephone and then Global Crossings.

"I picked up an internship … and just never left," she said. "It was fun to watch that transition from telecom to data."

About nine years ago, she switched over to Time Warner Cable as a senior sales manager for national sales, said Vázquez-Simmons. In addition to being a sponsor for her boxing events, she said that the company has allowed her the flexibility for the travel required by the boxing promotion.

She has always been a fan of the sport, but she became personally involved in 2001 when she was asked to translate for another local promoter, explained Vázquez-Simmons. His fighters were Mexican and Puerto Rican. A decade later, Vázquez-Simmons said that she decided to create her own promotion company and had planned to call it "Lelolai" in honor of her island roots. But a chat with Floyd Mayweather Jr. as he was preparing for a fight in Las Vegas changed all that, she said.

"I remember talking to him and saying I’m thinking about putting on a production company … and he said, ‘You should certainly do that, pretty girl,’" Vázquez-Simmons recalled. "And I said, "That’s my company name!’"

While her events have become more successful and professional, the early days were not easy, said Tim Darling. He has known Vázquez-Simmons for many years, as she and his wife, Melissa, grew up together.

The couple, in fact, had originally come out as spectators for her first bout at Salhen’s Stadium. But all that could go wrong did, and he and his wife stepped in to help, Darling said. Eventually, they realized she needed people close to her that she could trust to help with the business, he said.

Darling is one of six staffers that work for her part time, said Vázquez-Simmons.

With her entrepreneurial spirit, she also strives to create the best possible experience for the fan while also ensuring the boxers develop inside and outside of the ring, he said.

She also has integrity and ethics, which are important traits in the boxing business, added Carlos Rodríguez, who retired from the state attorney’s office and serves as her legal counsel.

"She wants to do everything transparently," he said, "which is unique for the boxing industry, where everything is done on a handshake."

Her company has great potential, he added.

"She’s a Type A go-getter who doesn’t get much sleep," Rodríguez said. "She wants to do a great job with every job she does. … She’s got the potential to be the best not only Latina boxing promoter, but the best promoter in New York state."