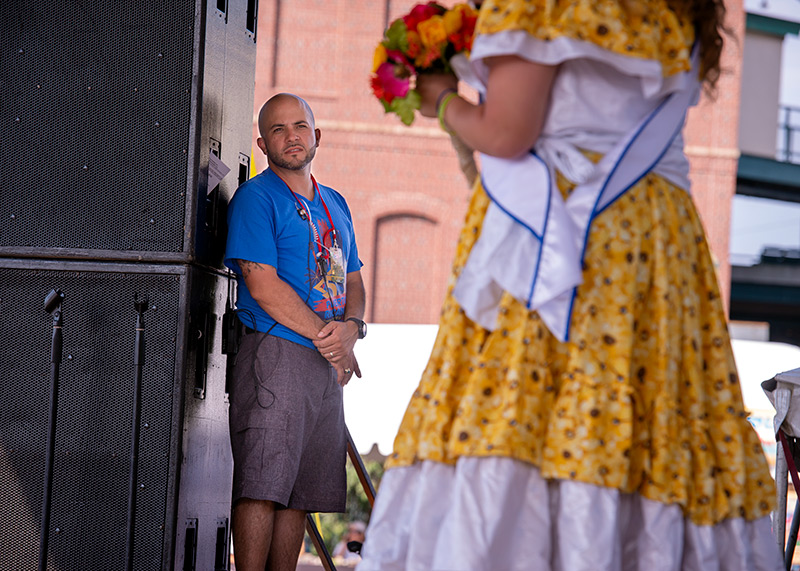 When Orlando Ortiz learned that he had been selected to receive the 2019 Hispanic Business Person of the Year Award, he was shocked.

“I was sure there would be other more qualified people that got nominated,” Ortiz said in an interview with El Mensajero Católico. “As I let it sink in, I started getting phone calls and congratulations, so it was a nice surprise.”

The annual award, presented by the Rochester Hispanic Business Association, recognizes an individual who has enhanced the local community with positive contributions or has contributed to economic development and business interests in the Greater Rochester area. The award was presented during a Sept. 24 luncheon at the Joseph A. Floreano Riverside Convention Center in Rochester.

Ortiz is president of the Rochester Puerto Rican Festival and also wears many hats as a manager at Gleason Manufacturing. He also is a member of the housing council for PathStone and an active member in numerous nonprofit groups.

A native of Cayey, Puerto Rico, Ortiz moved to Rochester in 1991 at the age of 10. That summer, his family decided to take a monthlong vacation in Rochester to visit family. Ortiz said he is related to the Rivera family that owned the former Rivera’s Market and other businesses in the area.

“We just come up for vacation for a month in June, and the next thing you know, my parents told us we were just going to stay here,” Ortiz recalled.

As a native Spanish speaker, Ortiz was enrolled in Dr. Martin Luther King Jr. School, which has a transitional bilingual program. Transitional programs are intended to help students phase out of their native language as their primary language.

“In high school, I kind of made a decision. Normally, most people that were in the bilingual program went to East High School because that was the next step, because that was the high school with the bilingual program,” said Ortiz. “I didn’t want to go to the same school that all my friends wanted to go to because I did not want to keep going down that road.”

According to Ortiz, his decision to attend Edison came from not knowing anyone who attended there in addition to the school having higher credit requirements to graduate, which he viewed as a challenge. Going to Edison provided Ortiz with the vocational experience that eventually led him to his current position at Gleason Manufacturing.

“It wasn’t until Edison that I went to a full English program, per se, which I’m glad I did, or else I wouldn’t have gotten that vocational piece,” Ortiz said. “I’m glad I did what I did.”

“It’s nice because I’m now managing the areas that I used to work at when I was 16,” said Ortiz. “So, it’s nice to have come full circle.”

In addition to his full-time job, Ortiz also manages to make substantial time to volunteer in the community. He has been on the Puerto Rican Festival board for 15 years, first getting involved while at RIT as part of his fraternity’s volunteer work in 2003. In 2005, after two summers of volunteering, he was asked to join the board as a volunteer coordinator. A few years later, he became the treasurer, eventually becoming president and taking over for Ida Perez in 2009.

In recent years, Ortiz has become involved in the RIT Alumni Association board, serving as lead chair for the RIT For Life Committee. He is the chair for the PathStone housing council board, as well as an executive board member with the organization. Last year, Ortiz also made the decision to join Foodlink.