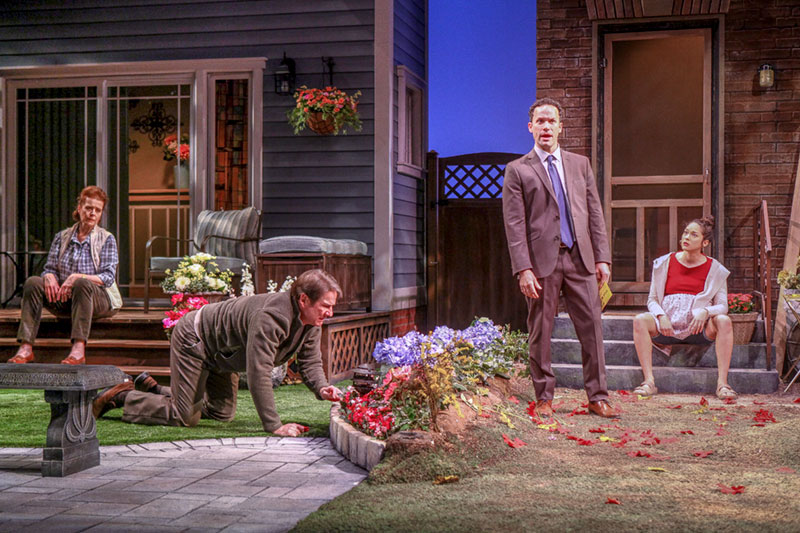 ROCHESTER — For the first time in its history, Geva Theatre is producing a show that not only was penned by a Latina playwright, but also features a predominantly Hispanic cast.

The comedy “Native Gardens” was written by Mexico native Karen Zacarías, an award-winning resident playwright at the Arena Stage in Washington, D.C. She also is a core founder of Latinx Theatre Commons, a national network that strives to update the American narrative to include the stories of Latinos. In addition, she is the founder of Young Playwrights’ Theater, an award-winning theater company that teaches play writing in local public schools in Washington.

Zacarías’s play tells the story of a culture clash between neighbors that turns them into feuding enemies.

Pablo, played by Erick González, is a rising attorney. He and his pregnant wife — doctoral candidate Tania (played by Monica Rae Summers González) — just purchased a home next to Frank and Virginia (played by Paul DeBoy and Anne-Marie Cusson), a well-established D.C. couple with a prize-worthy English garden. But an upcoming barbecue that Pablo has planned for his colleagues and a disagreement over a property line soon spiral into an all-out border dispute, exposing both couples’ notions of race, taste, class and privilege.

“After reading the playwright, I really wanted to audition for the role. I really loved the characters in the story,” González recently told El Mensajero Católico.

González has been an actor for almost 20 years. He was recruited from New York City for the role, and this is his first Geva production, he said.

He said his favorite part of portraying Pablo in “Native Gardens” is the relationship between Pablo and Tania.

“I have really enjoyed it. The show’s got a lighthearted but important message,” González noted.

Parisi, an attorney practicing personal injury law at Rochester’s Parisi and Bellavia Law Firm, told El Mensajero that she has been passionate about acting all of her life.

She said her love of theater stems from performing in DramaDanza in Guaynabo, Puerto Rico. She said she started dancing at age 3 and also has performed internationally as a ballerina and in theatrical productions with the Walt Disney Co.

Parisi said she is very excited for Rochester to see the production and is especially excited that for the first time Geva has an all-female production team.

“The playwright spoke to me, it’s about entitlement and diverse perspectives,” she said of “Native Gardens.” “It really speaks to the time we live in now, whether Rochester heads further towards segregation or closer to unity and togetherness.”