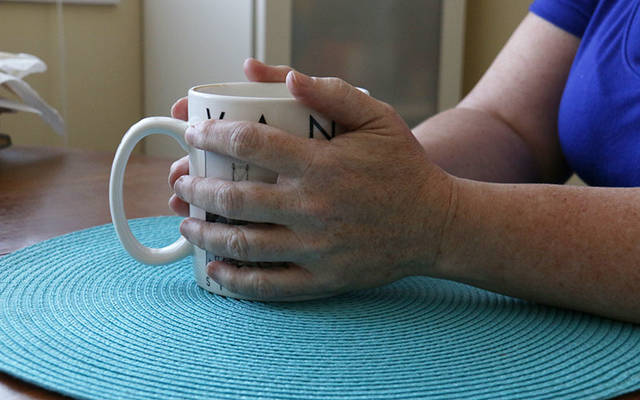 A Catholic abuse survivor gives an interview in 2018. (CNS photo by Agnieszka Ruck)

Despite the bruises on her body, Lucila Matos stayed in an abusive relationship for six years, all the while making excuses for the physical and emotional harm her partner was inflicting on her.

“My mind was creating excuses to defend everything that he would do, and I’d use these excuses to defend his behavior,” Matos explained. “‘No, he did it because I did this, and I should not have done that. … I did this,’ and I would always create these types of excuses.”

Matos shared her story May 21 during a virtual event hosted by Rochester’s Latinas Unidas, Sentadas a la Mesa (Sitting at the Table).

During her talk, Matos said she eventually escaped her abuser, and since then she has transitioned from victim to advocate. She founded the annual No More Domestic Violence parade in Rochester, which aims to raise awareness of domestic abuse and let people know it is not right, she said. In addition to informing people, Matos said she hopes the parade encourages victims to get out of abusive relationships and informs the community about resources available to help them do so.

This year, however, the COVID-19 pandemic not only has forced the cancellation of the parade but also has affected the availability of certain resources for victims of domestic violence, she said.

For example, Bethany House in Rochester, a shelter for women facing such challenges as domestic violence, announced March 25 that it was temporarily closing due to declining staff and supplies as a result of the pandemic. According to Bethany House’s website, some occupants were safely placed elsewhere.

Like Bethany House, Catholic Family Center’s Place of Hope, an emergency shelter in Rochester for single women, women with children and intact families, closed in March, according to Katherine Grant, CFC’s director of marketing and communications.

However, CFC’s emergency shelter for women and women with children, Sanctuary House, is still operating and has continued to respond to Department of Human Services and 2-1-1 helpline referrals, following all guidelines for admission and social distancing, Grant said.

A Catholic Charities program in the Southern Tier is likewise continuing to provide services to victims of domestic violence during the pandemic.

Catholic Charities of Schuyler’s First Step Victim Services program is ramping up communications with domestic-abuse survivors through such means as a 24/7 hotline, noted Ashley Kerrick, the agency’s director. The hotline is available to residents of both Schuyler and Chemung counties at 607-742-9629.

Calls to the hotline typically come from abuse survivors who already experience stress caused by domestic violence but now face additional stresses of being moms and teachers to their children 24/7, Kerrick said.

Overall, Kerrick noted, the agency is “reworking the services we were providing before in a different way. We’re still providing the advocacy, still assisting in relocating if a situation is unsafe and emergency housing is needed, and just really connecting them to whatever resource we identify during the intake process.”