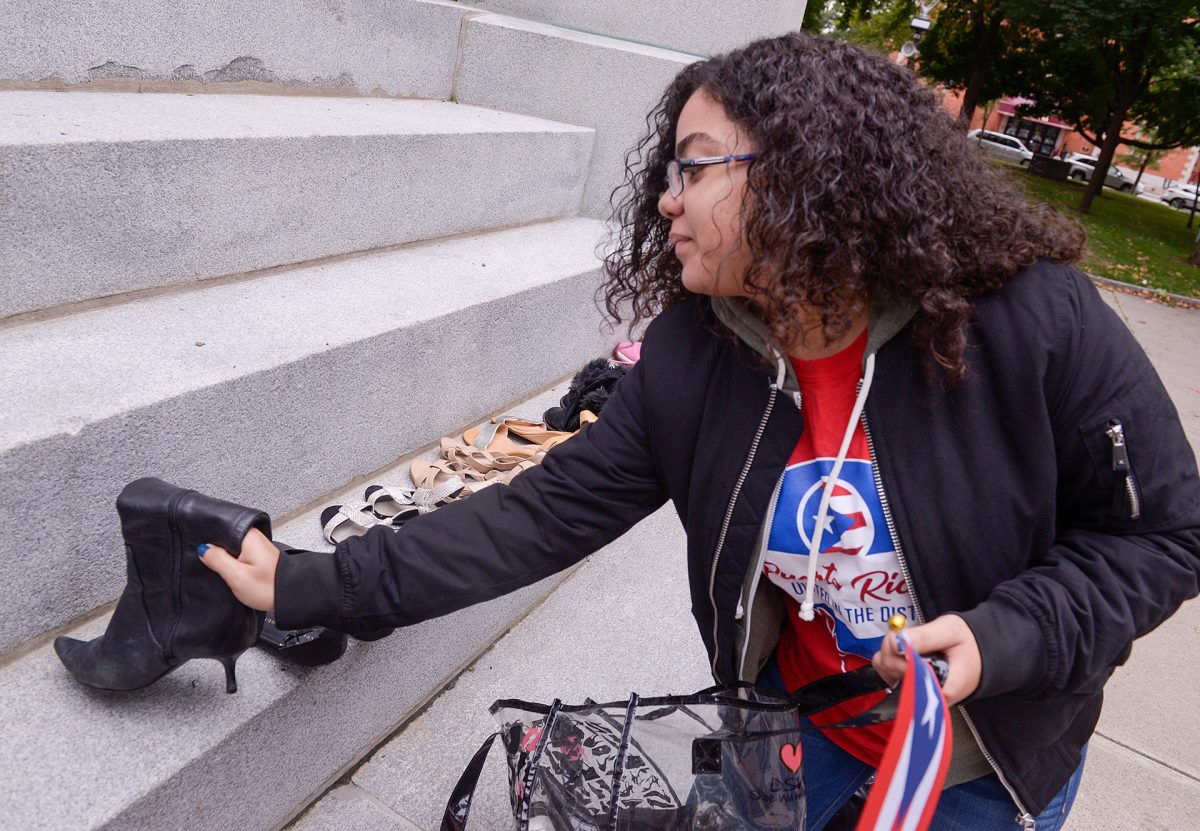 Johairy Delacruz places shoes collected to mark the one-year anniversary of Hurricane María and honor the 2,975 Puerto Ricans who died from the storm and those displaced from the island, during a vigil and rally on Sept. 22. The footwear donated for the lives lost in the hurricane were placed on the park monument and later delivered to local charities.(EMC Photo by John Haeger)

ROCHESTER — Organizers of a local rally to mark one year after Hurricane Maria hit Puerto Rico said communities across the state and country must continue to advocate for ongoing support of families on the island and in Rochester.

“In keeping the current situation at the forefront, we in the diaspora have to continue advocating for Puerto Rico’s recovery,” said Hilda Rosario Escher, president and CEO of Ibero-American Action League. She served as emcee for the Sept. 22 rally and vigil — which also honored the nearly 3,000 who died as a result of the hurricane— that took place in downtown Rochester.

“We have to continue demanding equity and justice on behalf of the more than 3 million citizens living in Puerto Rico,” she said. “We have to hold our congress people, our representatives, we have to hold them accountable.”

“We will vote for the 2,975 Boricuas who lost their lives,” said Mercedes Vázquez Simmons, owner of Pretty Girl Productions, which operates a youth boxing program in Vieques, Puerto Rico.

The number of deaths Vázquez Simmons cited was based on a study by George Washington University (https://bit.ly/2wwqEqF) that was recently released in an announcement from Puerto Rico Gov. Ricardo Rosello.

During her trips to the island after the hurricane, Vázquez Simmons said meeting two elderly families who faced the hurricanes alone have had a profound effect on her. Their resilience, courage and hope is admirable, she said.

“Despite the devastation on our island, great things happened. It united our people like (never) before,” she said. “However, our job is not done. You see we cannot allow this (federal) administration to continue to mistreat and disrespect our people, the Boricuas, the American citizens. … We will be their voice.”

Continued financial support and advocacy for the people of Puerto Rico is necessary because the hurricane caused more than $91.61 billion in damages, noted Ray Mayoliz, manager of Rochester’s Youth Outreach & Violence Prevention.

“We raised money. We sent goods, and it’s still not enough,” he said. “Our people still need us.”

The island is a shadow of its former self, with more than 60,000 blue tarps remaining on homes throughout the island, said Rochester City Councilwoman Jackie Ortiz. More than 58 percent of 1.1 million applications to the Federal Emergency Management Administration were denied, she noted.

Rochester native Paul Figeroa-Lippert, who now lives in San Juan, said he is working to make known the unique needs of the residents on the island. In addition to attending vigils and rallies to mark the anniversary of the hurricane, on Sept. 20 he spoke via Skype with U.S. congressional representatives who are looking into FEMA’s response to hurricanes in Puerto Rico and the U.S. Virgin Islands in 2017 (https://bit.ly/2Q9XVks). He was invited to speak through a cousin who produces a reality show and had a connection to a congressman from Mississippi, he told El Mensajero Católico.

He explained to the representatives that FEMA denied or has yet to approve 97 percent of 2,431 applications for funeral assistance because the official U.S. government death toll due to Hurricane Maria is 64. The Puerto Rico government updated the death toll to 2,975 on Aug. 28 based on the George Washington University study.

He also attempted to make the representatives understand the cultural differences on the island that led to so many of FEMA’s denials, he said.

For example, in order to obtain financial assistance for their damaged homes, applicants must submit deeds and building permits for their properties. But, Figueroa-Lippert noted, many people on the island don’t obtain permits to build structures. Similarly, he said, families in Puerto Rico do not adhere to inheritance laws and houses are passed down from one generation to the next without deed transfers. Without being able to produce permits and deeds, many families are being denied the financial assistance they need from FEMA, he said he told congress members.

In addition, U.S. control of the island through a Financial Oversight and Management Board — created to oversee Puerto Rico’s debt crisis — is causing further damage in a time of continued recovery by cutting funding for education, emergency management, transportation and housing, he said.

“How are we supposed to rebuild and educate our people (in order for them) to stay here to rebuild?” asked Figueroa-Lippert, who supports the independence of Puerto Rico. “For us in the independence movement, it’s really about our culture being acknowledged, that we do things differently. But to be treated like people with dignity like the U.S. treats people in other countries when other natural disasters have happened. … If the U.S. is not going to treat us like Puerto Rican-Americans, treat us as human beings and send help the same way they sent help to Haiti or Indonesia.”