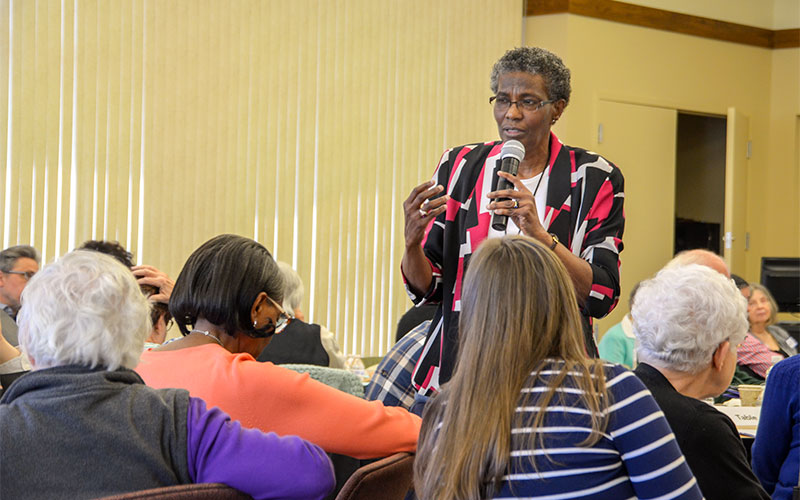 PITTSFORD — Why is racism such a difficult and taboo subject?

That question was posed and discussed during the first day of the two-day workshop “Building the Beloved Community: Racism and Beyond,” which was conducted at St. Bernard’s School of Theology and Ministry.

Hosted by the Diocese of Rochester’s Department of Pastoral Services, the April 12-13 workshop was led by Sister Patricia Chappell, executive director of Pax Christi USA, and Sister Anne-Louise Nadeau, Pax Christi’s director of programs. The event was open to all local faith communities and focused on modern-day racism and the appropriate ways in which to handle it.

After the discussion question was projected on a screen at the front of the room, Sisters Nadeau and Chappell asked participants to speak with others seated at their tables about why they felt racism was a difficult subject. After much discussion, Sister Chappell invited individuals to voice their answers to the room.

“It’s easier to talk about other people’s racism than it is my own,” said the Rev. Lane Campbell from the First Universalist Church of Rochester, who told El Mensajero Católico that she attended the workshop to help address racism in her church.

Rev. Campbell explained that some people may be more comfortable talking about others’ racism than facing the embarrassment or shame that comes from talking about one’s own thoughts about racism.

Sister Chappell agreed, adding that racism is a difficult subject to approach and not necessarily casual conversation.

The most common answer from around the room was that participants feared offending someone when talking about racism.

Multiple participants said they had attempted conversations about racism with good intentions but found they were not saying the right thing. They attributed their difficulties to not using the correct term or language when addressing someone. For example, some participants said they were unsure of whether to use the term “black” or “people of color” when describing an individual’s ethnicity.

Sister Nadeau acknowledged participants’ concerns but pointed out that conversations about racism are important to have.

“If we avoid talking about racism, how can we address or even begin to correct the behaviors associated with it?” Sister Nadeau asked rhetorically.