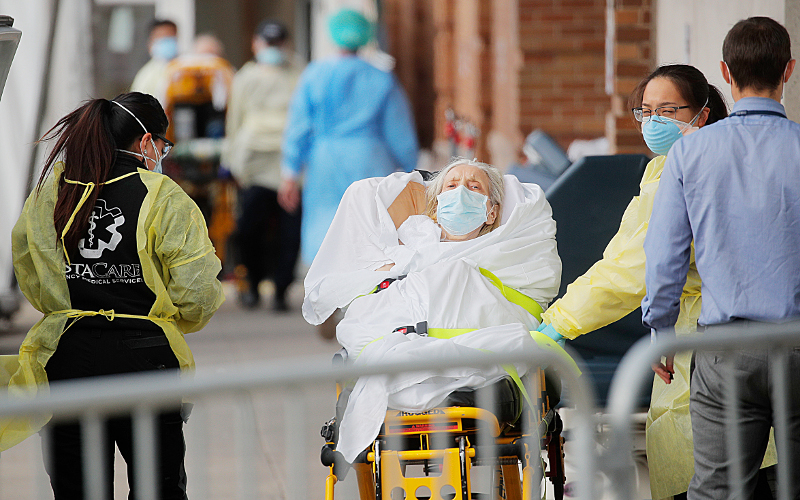 Paramedics in New York City take a patient into the Maimonides Medical Center April 7, 2020, during the coronavirus pandemic. (CNS photo by Brendan McDermid/Reuters)

As I sit here hunkered down in my home in West Hartford, Conn., the title of a 1953 novel by South African Alan Paton comes to mind: “Too Late the Phalarope.”

The novel is about a white young man, taller, smarter and more successful than the average Afrikaner, who commits the unpardonable crime in that then-apartheid society: having sexual relations with a black woman.

But he does not realize the consequences, until one day, the sight of a rare bird, the phalarope, makes him aware of what he faces. Convicted, he is ruined and his family along with him. There is no forgiveness. No redemption.

I read that novel long ago and the sense of loss, of a future suddenly gone forever, reminds me of what we are living through today. We know that how we lived last month is gone — along with our investments — and that many of us will never see the recovery. Even if we do, life might not be same.

Here and now, what dooms us is arrogance. Recall how just a few weeks ago, President Donald Trump invited reporters at a news conference during his visit to India to ask him about the coronavirus so that he could boast that it was under control.

There were opportunities to act before it was too late. In October 2019 — it seems so long ago now — health officials in New York City rehearsed how the U.S. would cope with a virus from China that would cause, eerily, the havoc we are living now.

The exercise revealed how poorly we would respond to such a pandemic. Had we heeded that warning, we would have had eight or nine months to prepare.

The first cases of the virus appeared in the U.S. and South Korea in late January. The South Koreans mobilized to produce kits to test hundreds of thousands and thus isolate and control the outbreak, which they did.
In the U.S., the mountain labored, as the saying goes, and brought forth a mouse — far fewer test kits and many that did not work. To date, our country has not done as much testing as South Korea, a small nation of 51 million. So much for American exceptionalism.

And now, with the disease having spread to every state, the opportunity to isolate and control it is gone. There is no recovering from lost opportunities; as Paton wrote: “Too late the phalarope.” Our fate is sealed.

Hospital systems are being overwhelmed. Medical personnel will have to decide, as is already happening in Italy, who lives and who dies. In the process of triage, sorting patients into priorities, those of us who are elderly and have reached or exceeded our life expectancy may be out of luck.

Aware of this, our daughter Mary, a college mathematics professor and our closest caregiver, consulted with her four siblings and then told us: “Mom, Dad, we want you to stay home for the next few weeks. I will do all your errands, shop for groceries, pick up your prescriptions.” Fortunately, she is on sabbatical this semester. On Saturday nights, she comes to dinner, highlight of the week, and afterward, we watch a movie. On Sunday, we turn on the TV Mass.

We pray then for children hungry for the meals they could only get at school; the millions of laid-off workers with no income; the shelf-stockers at grocery stores; the weary emergency and intensive-care unit doctors, nurses and staff; the National Guardsmen quickly readying field hospitals; the governors cajoling and demanding federal action; first responders coming at any hour; and national leaders with eyes, heart and soul on the common good.

May God help us all.