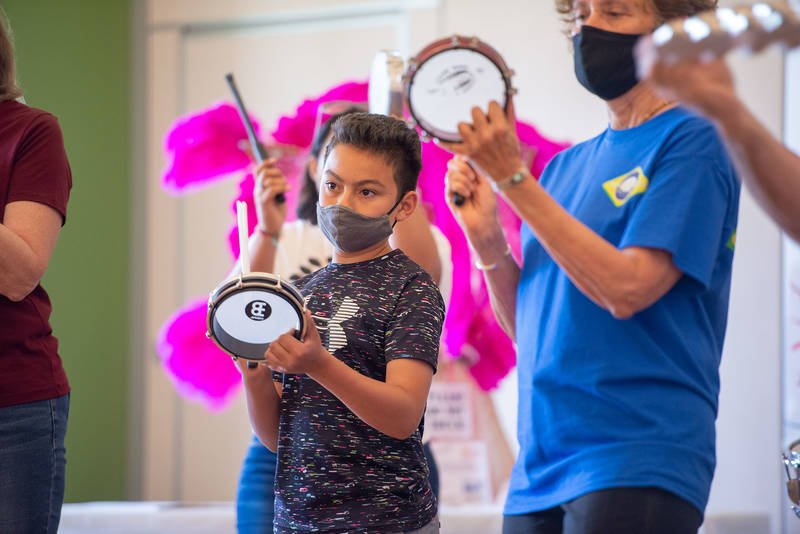 Maximo Carreras plays the tambourine during a drumming demonstration at the Carnaval EXPO celebrating Latin American culture and traditions June 6 at the Webster Recreation Center. The event was presented by Grupo Cultural Latinos En Rochester. 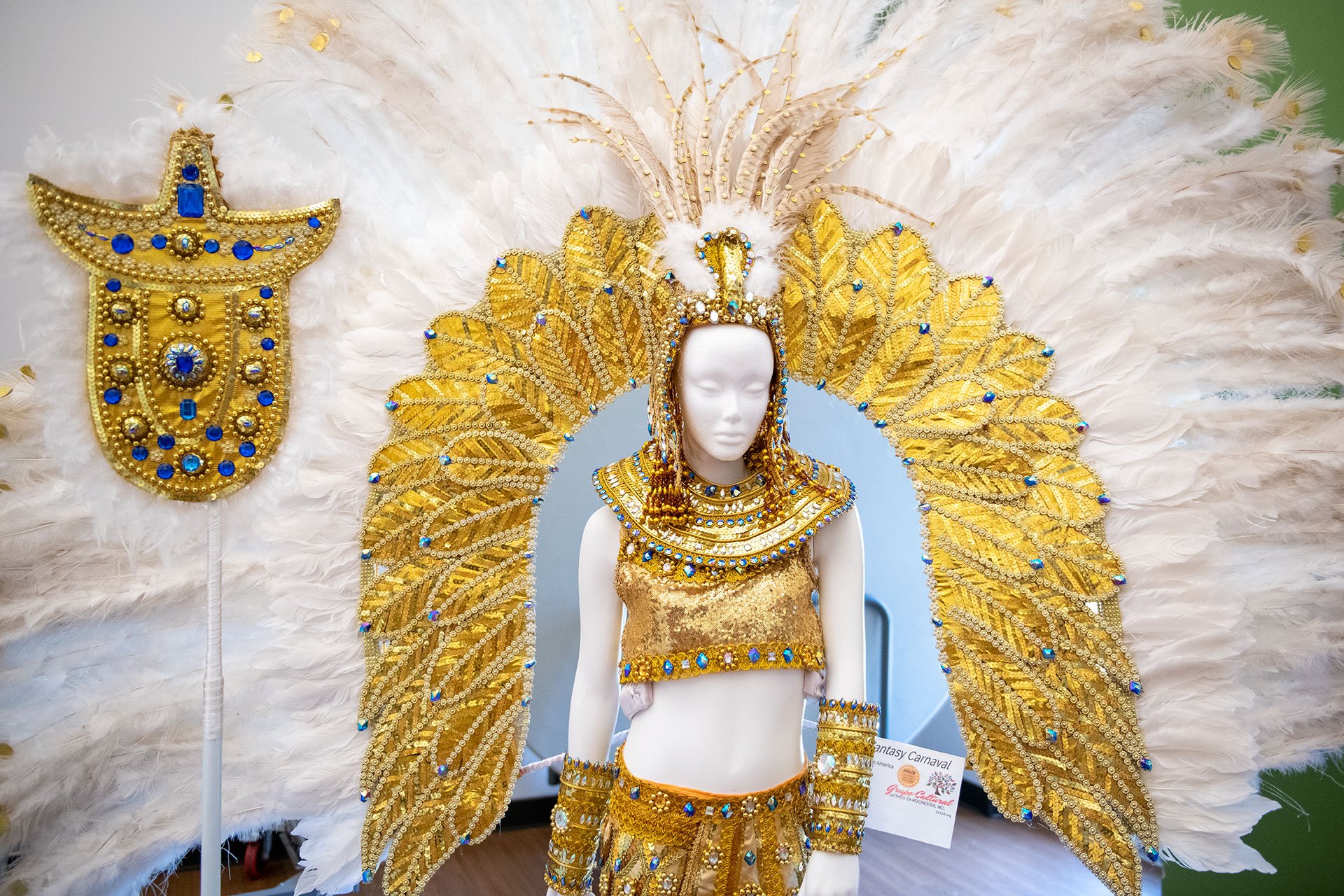 WEBSTER — Despite having to suspend in-person practices due to the coronavirus pandemic, members of Grupo Cultural Latinos En Rochester were finally able to host an exhibition related to its yearlong Project Carnaval, which began in the fall of 2019.

As part of the larger project, the group conducted a Carnaval EXPO at the Webster Recreational Center June 6, which included such activities as a mask-making workshop, folkloric dance performances, and an exhibition of dresses and costumes from different Latin American countries. Each aspect of the event highlighted the various traditions of such countries as Puerto Rico, Panama and Mexico during the celebratory event known as Carnaval.

Evelyn D’Agostino, Grupo Cultural Latinos’ founder and treasurer, said during the pandemic, there had been some initial concern with the group having practices via Zoom instead of in-person, especially since members had just begun to work with percussion instruments through a collaboration with the Eastman School of Music as part of Project Carnaval.

Nonetheless, members were able to adjust to the online practices, and, with the help of Shirley Bittlingmaier, they learned the traditional dances of Columbia, Trinidad, Italy and Spain so they could showcase the different aspects of the project during the Carnaval EXPO event.

Although the pandemic continues to pose different challenges, the group was able to continue its Project Carnaval, thanks to a grant received in April 2020 from the Genesee Valley Council of the Arts. Project Carnaval is set to conclude with a farewell performance during the Rochester Fringe Fest in the fall. Other performances scheduled throughout the summer include appearances at such local venues as The International Plaza on North Clinton Avenue in Rochester.

At the moment, there are 24 performers — 12 children and 12 adults — and more than 30 volunteers participating in the project.

D’Agostino, who is originally from Panama and moved to Rochester with her family in 2007, said it was important to her that her children be able to celebrate Panamanian culture. That is why she decided to use dance as a way to teach her children about their heritage.

“And then I started teaching other kids, and eventually we started to get invited by schools, colleges and organizations to perform,” she said.

After some time, D’Agostino was offered payment for the performances, so she decided to turn Grupo Cultural Latinos En Rochester into a nonprofit 501(c)(3) organization in 2013. Under the guidance of members of the community as well as help from numerous volunteers, the organization is able to offer cultural education for children, adults and seniors through art and dance programs.

Currently, the group has participants ranging in age from 3 to 65 years old. Since the group caters to both novices and professionals alike, it provides a multigenerational opportunity for families, such as daughters dancing with their mothers and possibly even grandmothers.

“So (for dancers) it’s pretty cool and different, because it has that component of bonding,” D’Agostino said.

One of the organization’s most active dancers is D’Agostino’s son, Mario, who said he has been dancing since he was 1.

“I just love dancing and following the traditions my mom follows, to following different traditions that we don’t really celebrate in the United States,” said the 11-year-old.

Mario said he enjoys the opportunity to participate in something that involves a lot of movement, drums and Hispanic culture. His personal favorite dance is “Diablico Sucio” (“Little Dirty Devil”) from Panama, which includes his favorite costume that is entirely red and black, features a colorful cape, macaw feathers and scary paper-mache mask. Additionally, the dance makes use of castanets and a hollow cow bladder as a percussion instrument.

Now that he’s older, Mario said it is his 5-year-old sister, Valentina, will don his original “Diablico Sucio” costume in performances to come.

The elaborate costumes worn during performances feature embellishments made of colorful sequins, feathers and jewels on an array of materials. According to D’Agostino, some costumes were sewn with materials purchased from New York City prior to the pandemic, and family, friends and members of the community from all over the world have donated a majority of the wardrobe.

Generally, the costumes come from D’Agostino’s sister, Kendall Shirley, who travels throughout Europe for work. She occasionally ships costumes to New York in addition to donating her daughters’ pieces for Project Carnaval.

“Some of the costumes we have today at the expo were my nieces’ when they were part of the Carnavals in Panama,” said D’Agostino. “She’s like, here, you have it to show to the community, maybe that gives people interest to be part of the project.”

EDITOR’S NOTE: For more information on Grupo Cultural Latinos En Rochester, including how to participate as a dancer or volunteer and details on upcoming performances, visit gcler.org.