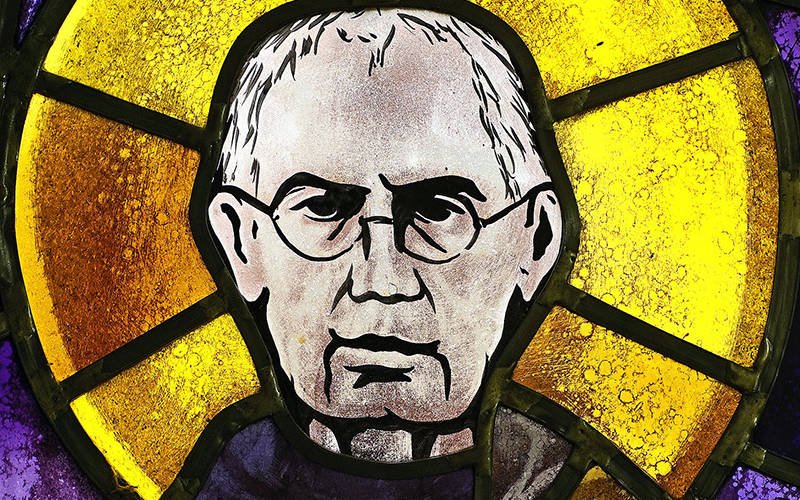 St. Maximilian Kolbe is depicted in a stained-glass window at St. Josaphat Church in the Queens borough of New York City. The Polish priest gave his life in place of a young father condemned to execution by the Nazis. His feast day is Aug. 14, the day of his death. Bishop Matano mentions St. Maximilian Kolbe in his column. (CNS photo by Gregory A. Shemitz)

My dear brothers and

During these summer months the Church celebrates several beautiful feasts that could go unnoticed in the midst of summer activities and vacations. At the beginning of this month on August 6, we celebrate the Feast of the Transfiguration of the Lord. This feast says a lot about life.

As you will recall from the Gospel for that day (Mark 9:2-10), Jesus took His disciples Peter, James and John to a high mountain “and He was transfigured before them, and His clothes became dazzling white… Then Elijah appeared to them along with Moses.” We can only imagine what an extraordinary experience this was for the apostles to see their Lord accompanied by these great leaders and teachers of the Old Testament who awaited the coming of the Messiah.

But this is not the end of the story, for it continues: “Then a cloud came, casting a shadow over them; from the cloud came a voice, ‘This is my beloved Son. Listen to Him.’” This is such an overwhelming confirmation, testimony, from God the Father about His Son and Our Savior, Jesus Christ!

Naturally, Peter wants to take this special moment and extend it, so he says to Jesus: “Let us make three tents: one for you, one for Moses, and one for Elijah.” Would we not do the same? We all want special moments that bring joy to last as long as possible, even for a lifetime.

But that is not what happens on Mount Tabor, the mountain of Transfiguration, as the Gospel tells us that they came “down from the mountain.” The events that took place on Mount Tabor were meant to confirm the apostles in their faith in Jesus and to strengthen them for the mission that Jesus was to entrust to them. The apostles had to descend from that mountain and begin their work of cooperating with the Messiah in the work of salvation.

Therein lies the message for us: Our faith, the practice of religion, is not an escape from the challenges of our lives, but rather the reception of Jesus in the Most Holy Eucharist and our participation in the sacramental life of the Church, particularly through the Sacrament of Reconciliation, Confession, provide the strength that sustains us in life’s challenges. Jesus Himself did not escape the reality of the cross and became the sacrificial victim for our salvation.

Pope St. Sixtus II and his companions, St. Teresa Benedicta of the Cross, St. Lawrence the Deacon, Pope St. Pontian and the priest St. Hippolytus, the Franciscan friar St. Maximilian Kolbe and St. Bartholomew the Apostle are all martyrs of the Church who are commemorated in this month of August. For these, our companions in the faith, belief in Jesus was so strong that, like Jesus, they did not escape the trial of martyrdom. They each descended from the mountain of Transfiguration after they gazed upon the Most Holy Eucharist at every Mass and then proceeded to profess Jesus as Lord, imitating the Blessed Savior and never counting the cost.

Pope St. Sixtus II and four deacons, Januarius, Vincent, Magnus and Stephen were arrested on August 6, 258, while celebrating Holy Mass and then put to death by order of Valerian, the Emperor of the Roman Empire at the time. Sixtus II is mentioned in the Roman Canon, the first Eucharistic Prayer. He and his companions are commemorated on August 7.

St. Teresa Benedicta of the Cross was born Edith Stein in 1891 in Breslau, Germany. Deeply inspired by the writings of St. Teresa of Avila, she embraced the Catholic faith and was baptized on January 1, 1922. In 1933 she entered the Discalced Carmelite Community and received the name Sister Teresa Benedicta of the Cross. She became a victim of the very cruel and most distressing anti-Semitic attacks during the Nazi persecutions of our Jewish sisters and brothers. Sister Teresa was arrested in 1942 in her convent at Echt, Holland, and brought to Poland, where she was put to death at the Nazi concentration camp at Auschwitz, a place of such horrendous acts that still cry out for reparation and torment the human spirit, knowing that humanity can engage in such terrible acts against life. Together with St. Catherine of Siena and St. Bridget of Sweden, St. Teresa Benedicta was declared Co-Patroness of Europe by St. Pope John Paul II. She is commemorated on August 9.

The deacon St. Lawrence, returned to the Lord as a martyr in 258, four days after the martyrdom of Pope Sixtus II and the four deacons, once again under Valerian’s regrettable reign as emperor. After the Holy Apostles Saints Peter and Paul, St. Lawrence is venerated as Patron of Rome, mentioned in the Roman Canon and an inspirational and patron saint of deacons, called to imitate St Lawrence’s genuine love for the poor. He is commemorated on August 10.

Both St. Pontian and St. Hippolytus were victims of the Roman persecutions of Christians. They were exiled after their arrest and sent to labor in the mines of Sardinia, considered at that time to be a death sentence and which claimed their lives in 235 as victims of the cruel reign of the Emperor Maximus Thrax. They are commemorated on August 13.

St. Maximilian Mary Kolbe, O.F.M. Conv., another victim of the unspeakable crimes committed at Auschwitz, was put to death by lethal injection in 1941 after offering his life in place of a fellow prisoner, the father of a family. He is commemorated on August 14.

St. Bartholomew the Apostle was martyred in the first century. He is said to have preached the Gospel in India and in Armenia where he sacrificed his life. Like the other apostles, except for the beloved disciple John, he contributed to the foundation of the Church with the very donation of his life in imitation of the Sacrifice of the Cross. He is commemorated on August 24.

None of these saints viewed faith as an escape from the responsibility to live, preach, proclaim and embrace totally the person of Jesus Christ. So it is in our lives that, while perhaps not being called to become martyrs in this same sense, our faith is truly integral to who we are and defines our lives, directs our actions and enables us to accept the challenges of Christian discipleship, recalling the words of Jesus: “If anyone wants to come after Me, he must deny himself, take up his cross, and follow me” (Matthew 16:24).

Of course during this month we also celebrate the Solemnity of the Assumption of the Most Blessed Virgin Mary on August 15. On this Solemnity we rejoice that: “Finally, the Immaculate Virgin, preserved free from all stain of original sin, when the course of her earthly life was finished, was taken up body and soul into heavenly glory, and exalted by the Lord as Queen over all things, so that she might be then more fully conformed to her Son, the Lord of lords and conqueror of sin and death. The Assumption of the Blessed Virgin is a singular participation in her Son’s Resurrection and an anticipation of the resurrection of other Christians …” (Catechism of the Catholic Church, no. 966).

In his apostolic constitution, Munificentissimus Deus of November 1, 1950, Pope Pius XII proclaimed this tenet of our Catholic faith, which defined “the centuries-long tradition of belief in this mystery” (New Catholic Encyclopedia, Catholic University of America, 1967, p. 971). The Holy Father embraced the prayer of the ancient Byzantine Liturgy, Troparion, Feast of the Dormition: “In giving birth you kept your virginity; in your Dormition you did not leave the world, O Mother of God, but were joined to the source of Life. You conceived the living God and, by your prayers, will deliver our souls from death” (Catechism of the Catholic Church, no. 966).

While Mary did not undergo a martyrdom of blood, she certainly endured a martyrdom of spirit. Mary stands as a woman of incredible faith; in her own life she experienced her personal via crucis, her way of the cross, as unveiled through her seven sorrows: the presentation of Jesus in the Temple, where Simeon told Mary that a sword shall pierce her heart; the flight into Egypt to avoid King Herod who sought to destroy the Christ Child; Jesus being lost in Jerusalem at the age of 12 when Mary and Joseph had gone to Jerusalem for the feast of the Passover; the meeting of Mary and Jesus on the way to Calvary; the crucifixion; the taking of Jesus down from the cross; and His burial. She, whom we now rightly revere as Queen of Heaven and Earth, was not exempt from suffering; in fact, her sufferings were grave. With a mother’s love, she bore them all. From the very moment of her fiat, “Thy will be done” (Luke 1:38), she lived not by her will but by God’s will. With strength beyond human, she stood beneath the cross to receive her dead Son in her maternal arms: from crib to cross, she remained a woman of unwavering faith.

Our present, difficult age challenges us to a martyrdom of spirit as we strive to live the Gospel of Jesus when this message is not readily accepted or even is responded to with grave negativity, especially as we continue to

• uphold the dignity of every human life from the moment of conception until natural death;

• uphold the glory of God revealed in the crown of His creation, the human person, made in the image and likeness of God, created in the heart of God and not intended to be the subject of immoral experimentation as part of a culture described by Pope Francis as an “ideological colonization” (Homily, Casa Santa Marta, November 1, 2017);

• teach the constant tenet of faith given by God about the sanctity of marriage as the union “written in the very nature of man and woman as they came from the hand of the Creator (Catechism of the Catholic Church, no. 1603), forming a bond of communion and mutual support, that is permanent and exclusive (ibid., 1638), open to God’s gift of children (Lumen Gentium 11, §2);

• confirm the dignity of the sick, the elderly and the vulnerable, the refugee and the foreigner, the outcast and the forgotten;

• realize that differences in culture, race and ethnic background contribute to the unity of the Church as we bring our traditions together in the one, holy, Catholic and apostolic Church – that from every land and from every nation, God has called us into existence.

We must accept the challenge to proclaim these truths and to bring Jesus into our streets and communities.

Let us make the Collect for the Mass commemorating St. Teresa Benedicta of the Cross our prayer:

God of our Fathers,

Who brought the martyr Saint Teresa Benedicta of the Cross

To know your crucified Son

And to imitate him even until death,

Grant, through her intercession,

Invoking the intercession of Our Mother, Mary, and our diocesan patron, St. John Fisher, I remain