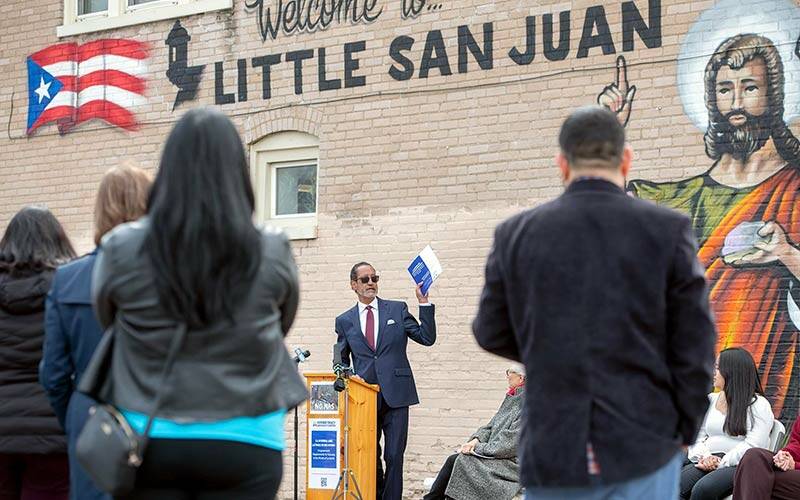 Rochester’s drug-treatment and recovery system needs a complete overhaul for members of the Latino community, who are disproportionately affected by the opioid epidemic.

That’s the conclusion the Father Tracy Advocacy Center, the University of Rochester and Common Ground Health’s Heroin/Opioid Workgroup drew from a series of open-ended, in-depth interviews they conducted with Latinos, who shared their experiences with drugs and what they believe they need to sustain recovery.

Information from the interviews was included in a white paper, “La Avenida and Latinos in Recovery: Programmatic Requirements for Success, in the Words of la Gente,” that was released during an April 11 press conference at the advocacy center. The paper detailed proposed changes to a system that the three groups say needs to do much more to make treatment and recovery services more inclusive.

The system is failing Latinos

According to Rudy Rivera — the advocacy center’s founder and CEO and a coauthor of the white paper — overdose rates doubled among Latinos in 2019, and the community has the highest risk of opioid-driven emergency-room visits in Monroe County.

“It’s the classic, ‘There’s less of us but more of us dying,’” said Rivera, whose advocacy center on North Clinton Avenue is located in the heart of Rochester’s opioid crisis.

Rivera, who said he was called by God to open the advocacy center, remembers how the “total anarchy on North Clinton Avenue” led him to continually call out ineffective city, county and private-industry programming being offered to those with addictions, particularly Latinos.

“The message I was sending to folks was, ‘Where the hell are you? And more importantly, where’s your money? If you want to become relevant, you need to come down here,’” he recalled. “These partnerships weren’t about, ‘Oh kumbaya, let’s all be happy.’ No, it was about us as advocates saying, ‘You are failing to meet the needs of the people systemically — all of you.’ So as far as I’m concerned, it was a compelling indictment about what wasn’t happening that needed to be happening.”

The recommendations outlined in the white paper came from 28 interviews with those who shared their experiences with drugs and what they believe they need to achieve sustained recovery. The interviews shared a “constant theme of pain and suffering,” Rivera said.

One man, who described being raised to think that showing emotion meant showing weakness, did drugs because they made it easier for him to keep his emotions hidden.

And a woman relayed that she started doing drugs in an effort to fit in with a drug-using partner and maintain the toxic relationship.

Rivera said the interviews highlighted a nationally-emphasized misconception: that the root of the opioid epidemic is in over-prescribed medications rather than in trauma and poverty at home.

In addition, the interviews also highlighted that “women had more specific needs than men,” noted Ciara McGillivray, director of operations for the Father Tracy Advocacy Center.

The women interviewed cited histories of unresolved trauma, which resulted in poor mental health, physical health, and relationships with themselves and others. This also fed their desire for women-only treatment programs, given that a lot of the traumas they described involved violence at the hands of men. Same-sex environments, the women shared, would allow them to be more comfortable being vulnerable during drug treatment.

“Child care was another huge issue,” McGillivray added. “They’d say, ‘Yeah, I would love to go to treatment if I could, but who’s going to take care of my children?’ They don’t have the support they need to do the things they know they should be doing (to get treatment).”

The current system is unprepared

The reason Latinos are disproportionately affected by the opioid crisis is complex and due to a number of factors, including lack of opportunity and education, pervasive poverty, and single or absent parents dealing with their own burdens, according to Rivera.

In a system unprepared to confront these things, follow-up care after drug treatment is “a fiasco,” he said, making relapse too common. People come out of treatment without proper support and without “all the things they didn’t have before they went in. That’s what I call a recipe for perpetual failure.”

Offering more effective community-level interventions not only would help Latinos to better sustain their recovery, but would provide people seeking treatment with more dignity and respect, Rivera said.

Latinos have a right to inclusion

The white paper’s in-depth interviews also offered anecdotal evidence that the vast majority of white individuals achieve and maintain recovery, while “the vast majority of Latinos simply drop off the edge of interventions, kind of like a slow drip from a faucet,” Rivera said. This will be further explored in a more scientific, quantitative study that is expected to be completed before the end of the year, he said.