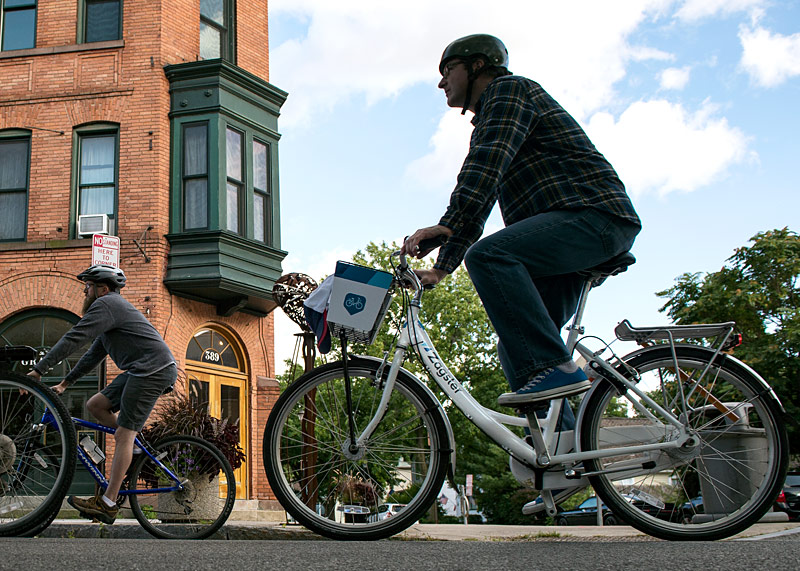 ROCHESTER — The city launched a new transportation alternative this summer to help address the challenges faced by residents who must rely on public transportation, officials said.

“Some have to rely on taxi cabs, and many have to walk,” said City Councilman Dana Miller. “And many people in the city do ride bikes.”

To boost access to more bikes, the city launched a bike-share program in July in partnership with Zagster, which is based in Cambridge, Mass.

“What’s really unique about our system in Rochester is that riders can pick up and/or drop off bikes at either an official Zagster station, or any other bike rack in the city,” Terbush wrote in an e-mail. “This offers a really neat balance of predictability and convenience.”

The cost to use a bike is $1 per half hour. In other areas, such as New York City, the company charges a membership fee of $160 in addition to the user fee, company officials said.

The Rochester program requires a credit card and use of a smartphone to download an app with built-in GPS to track the bicycle, Miller said. The app unlocks and locks bikes at each station, he said.

Miller and Terbush said the company is working on accepting other methods of payment.

“We understand the frustration of those who don’t have credit cards, and we understand that solving that issue is important to the city,” Terbush said. “It’s also important to Zagster, given our mission is to make the bike the most loved form of transportation. We’re continuing to evolve our technology as well as explore other approaches with a goal of making access a snap for everyone.”

Some users also may have limited data plans on their phones, so the city is working on boosting Wi-Fi capacity to address that concern, Miller said.

Several yeaers ago the city began efforts to improve access to transportation, particulary for residents living in high-poverty areas with lower rates of car ownership, Miller explained. The city first addressed the need by adding bike paths or bike arrows to streets that were part of any road construction project, he said. When the state Legislature approved ride-hailing companies like Uber and Lyft, the city brought those in as well, Miller said.

“Rochester is a very car-centric city,” he added. “What we’re really trying to do with all these strategies … is to make sure people can get to their jobs or shopping if they don’t have a car.”

Children from low-income and minority households, particularly blacks and Hispanics, are more likely to bike or walk to school than whites or higher-income students, according to a study by People for Bikes (http://bit.ly/17VShLw). Yet, 52 percent of Americans don’t have access to a working bike, the pro-bicycle organization found.

“We found that bike-sharing really helps transform communities,” Timothy Ericson, Zagster’s founder and chief executive officer, said during the July 20 launch of the service in Rochester.

Mike Governale, president of Reconnect Rochester, said his organization was ecstatic about bike-sharing and ride-hailing companies coming to Rochester.

“We are the cheerleaders for public transportation and other forms of transportation alternatives to (cars), like walking and biking,” he said. “These things really help make the leap from driving everywhere, to making a few trips without a car, to whole hog living car free.”

Biking allows all residents the opportunity to exercise or explore the city in a different way, Governale and Terbush said. They also concurred that biking helps areas in general by reducing traffic and car pollution.

“We hope to drive an overall increase not just in bike-sharing, but in bike riding,” Terbush added.

Not driving also has many health benefits, Governale said, noting that even walking to and from a bus stop is exercise.

“If you work in active transportation to your daily routine, you can cut your risk of heart disease and diabetes by more than half,” he said. “And you’re not having to make an extra trip to the gym every day.”

Governale said his group has met with Zagster and plans to help the city grow the bike-share program and potentially expand into the suburbs.

Feedback on the Rochester program has been positive so far, Miller said, and Zagster has reported 5,000 trips in the first month the service was available.

“I was a little nervous that people wouldn’t take to the service,” he added. “It has been interesting to see how many bikes I see on the road and how many people I see riding.”

The bike racks that Regional Transit Service added in recent years will likely help expand use of the bike-sharing program as well, Miller said. All the bikes are cruiser style with a basket on the front and a rack on the back for small bags.