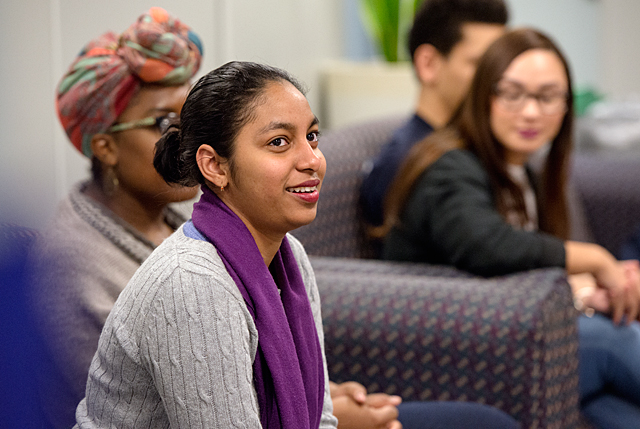 ROCHESTER — Students at the University of Rochester joined a protest last fall in response to racist comments that were posted on a social media app. Subsequently, university leadership created a commission to explore the racial environment on its campuses.

When the university’s new Presidential Commission on Race and Diversity met for the first time in December 2015, however, members of the Spanish and Latino Student Association (SALSA) immediately noticed a complete lack of Latino representation on the commission, noted Justin Delinois, a freshman and SALSA member.

As a mentor once told him, Delinois said: "Whenever race is discussed, Latinos are left out of the conversation."

The validity of that statement became apparent in this situation, he said, adding: "I saw that as my opportunity to get a seat at the table."

Richard Feldman, who is dean of the university as well as a professor of philosophy, said UR did not intentionally exclude Latinos from the commission’s original composition of 18 faculty, staff and students. But the administration wanted to create a working group representing all six campuses yet small enough to be efficient and effective, he added.

"It’s just not the case that every (campus) group got representation," Feldman said. "But then after discussion, we agreed it was important to have another voice there."

SALSA Vice President Jesús Flores said his group’s members appreciated the university’s prompt action in appointing Delinois, who graduated from McQuaid Jesuit High School, to be the Latino voice on the commission.

"It’s important to have somebody of Latino background to represent students," Flores added. "It’s just great that (Justin) is very active in the Rochester community and is a strong link between the school and Rochester."

The commission’s main responsibility is to respond to issues that were raised during the student protest last fall and to take a broader look at issues of race and diversity on the university’s campuses, Feldman explained.

During their protests, students raised concerns about feeling somewhat unsafe or marginalized on campus due to racist comments made on the Yik Yak app, and about the number of minority faculty members and certain issues about support for student organizations on campus, he added.

Kiara Cruz (left) listens to Renalf Marmolejos describe his experience studying abroad during a Feb. 22 Spanish and Latino Student’s Association meeting at the University of Rochester.

The smartphone application, which is offered by an Atlanta-based company, acts like a community bulletin board and connects its users with other users in the local area, according to information provided by UR at http://bit.ly/2181xkn. The app also allows anonymous comments to be posted, Feldman and Delinois noted.

While university officials decided not to ban the app’s use on campus, they are working on ways to make the use of Yik Yak more responsible and also created the "We’re Better than That" campaign to address racist comments, Feldman said. The campaign includes T-shirts, buttons and social media postings bearing the campaign slogan and seeks to spread the message that racism won’t be tolerated at the university, he said.

"It’s important to understand the nature of the decision the university had to make," Feldman said. "We did not have any capacity to prohibit its (Yik Yak’s) use."

While the university could technically ban use of the app on its servers, students would be able to access it through their own cellular networks, he explained. The administration decided it was better to continue ongoing discussions with the owners of Yik Yak rather than prohibiting its use, Feldman added.

Delinois and Flores said students who protested are not happy that UR President Joel Seligman chose to allow continued use of Yik Yak on campus and will continue to pressure the administration to change its policy.

The presidential commission also will look into increasing funding for the Office of Minority Student Affairs and giving the Douglass Leadership House, an organization which was created in 2012 to raise awareness of black culture, a permanent spot on the university’s fraternity row of housing.

Although Delinois said he is happy to provide the Latino voice on the commission, he still questions how effective the group will be in the long run. Many of its members are faculty and staff who do not live on campus, so they do not directly experience the racism that led to the students’ protests. These members’ lack of firsthand experience with racism on campus would make it harder for them to address problems, he said.

As a SALSA board member, Delinois provides the association with information from the commission’s meetings, Flores said. Then the association works with other groups on campus to offer feedback to the commission, he added. Founded in 1970, SALSA seeks to raise awareness of Latino culture on campus and in the community through political and social events as well as community service projects, he said.

Feldman said the commission has conducted eight town hall meetings to solicit more student and staff feedback about the racial climate on campus. The commission also plans to survey students, faculty and staff about the university’s responses to issues of diversity, he said.

SALSA also would like those recommendations to include adding a cultural orientation program for new students. Delinois said such a program could feature a seminar or workshops about all the different cultures and student groups on campus, he added.

"People (can) learn about and be educated about the types of racism that persist in our culture and how to combat them and not let these things persist," he said. "We can teach people how to be better people, in a sense."