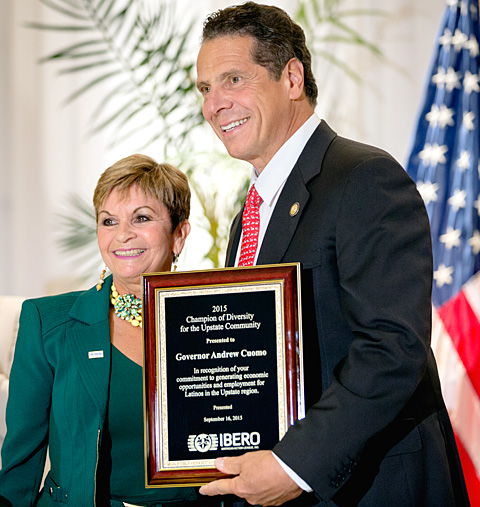 ROCHESTER — Preparing the workforce for the future, improving graduation rates and marketing to Hispanics were among the topics discussed during the Upstate Latino Summit.

Gov. Andrew Cuomo also made an appearance at the summit to talk about the state’s goals to restore "economic justice" statewide. With that focus in mind, state agencies have invested more in upstate economies, which has led to the creation of more private-sector jobs, he said.

"You can feel the optimism," he said during the 47th-annual Ibero-American Action League Awards Luncheon, which was part of the summit. William Ramos, director of intergovernmental affairs for the U.S. Department of Commerce’s office of the secretary, served as keynote speaker during the luncheon.

Part of the state’s investment has included awarding state contracts to minority- and women-owned business, the governor added. Those businesses now receive 30 percent of such contracts, compared to 10 percent when he took office, he said.

Cuomo also said that he supports raising the minimum wage, which he said he will propose to the state Legislature in the new year.

But that is one issue that could hurt small businesses, noted Al Burgos, owner of Burgos Income Tax Inc., during a pre-summit session led by Robert Duffy, president of the Rochester Business Alliance.

In order to afford a potential increase in the minimum wage to $15 an hour, small companies would have to scale down their staff, Burgos added.

"It’s going to be very difficult" for business to afford such an increase, he said. "I’m encouraging entrepreneurship. … But my entrepreneurs are very nervous about this."

Duffy said that he is hopeful the governor’s proposal will include such offsets as a decrease in workers’ compensation costs for employers to make the raise in minimum wage "cost neutral."

"You can’t put this on the backs of business owners," he added.

But a counterpoint is that a $15 an hour minimum wage would bring everyone’s salaries up, Duffy noted. The challenge for many companies, especially in manufacturing, however, is not salaries but jobs going unfilled, he said. And this is happening right before the Rochester Regional Photonics Cluster projects begin, Duffy said.

Those projects will focus on manufacturing and research in such areas as optics and imaging, according to information at http://www.rrpc-ny.org.

"We have to prepare the workforce now for all the jobs that are coming," Duffy said.

In addition to discussions on preparing the workforce and minimum wage, the daylong summit featured workshops on such topics as business development, education, health, politics and immigration.

During the immigration workshop led by Rafael Collazo from National Council de La Raza, Belen Colón of Rochester expressed her concerns about farmworkers locally who continue to be picked up by U.S. Border Patrol. She asked the panelists, who included Jackie Vimo from the New York Immigration Coalition and Luis Torres of the Worker Justice Center, what people can do to help these farmworkers.

"If they get picked up by immigration officials, they have to leave their family behind," she remarked.

Torres said that local residents can look out for immigration workshops, such as one planned for Oct. 17, that discuss ways to help migrant families. His hope is that local enforcement agencies follow the lead of police in New York who have agreed to only enforce local laws and not immigration laws, he added.

Torres said that when workers are detained, they need help with such things as advocacy, translation services and legal representation, the latter of which only a small percentage of such detainees even receive, Vimo noted.

New York is also behind California on such important legislation as the Dream Act, which would allow young immigrants who have lived in the United States for most of their lives the opportunity to attend college or serve in the military, as well as issuing driver’s licenses for workers and providing them with health care, Vimo said.

"We need to hold the governor accountable," she said.

On a national scale, the immigration debate has taken a negative tone because of comments made by Donald Trump in his bid for the Republican nomination for president, and other candidates have followed suit, Collazo said.

Trump’s proposal to overturn citizenship for people born in the United States, specifically those born of undocumented workers, would be a violation of the 14th Amendment to the Constitution, he added.

"It’s wholly deplorable," Collazo said of such rhetoric. "Millions of people are under attack."

He said that a number of incidents have been reported of people being beaten or shot at because they are Latino because of Trump’s anti-immigrant rhetoric.

"It is less safe for us living and working in this society than it was a few months ago," Collazo remarked.

Because of Trump’s rising popularity, Latinos must make sure their voices are heard at the voting booth, he added.

What these candidates fail to realize is the power of Latinos as an economic force, according to participants in the business development workshop.

Latinos know how to connect quickly, Ramos said, and are the highest users of social media. And Hispanics comprise 21 percent of millennials — they are being labeled "Hispennials"– and this is one of the most important emerging markets nationally, Ramos said.

Every company trying to target Latinos, of any age, also should note another important factor, said Daisy Rivera-Algarin, the city of Rochester’s senior marketing specialist. Latinos prefer to be approached by someone who looks like them and is bicultural, she said.

"Your organization has to make an organic, authentic connection (with Latinos)," Rivera-Algarin added.