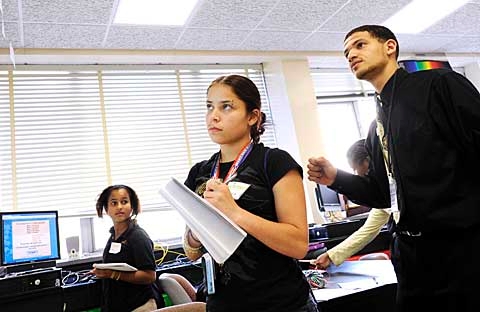 ROCHESTER – A report released this month by the University of Rochester’s Warner School of Education indicates that Latino students are dropping out of school for a multitude of reasons arising from the complexity of issues they face on a daily basis: language, cultural identity, safety and poverty.

The two lead investigators — professors Judy Marquez Kiyama and Donna Harris — presented an overview of their findings during the 42nd annual Ibero-American Action League luncheon and recognition awards Oct. 14 at the Hyatt Regency Hotel. The study, "School Experiences of Latino/a Students," was initiated by Ibero and conducted by a team of researchers from the Warner school, which was also to be recognized as a "Friend of Ibero" during the event.

"The message you’ll hear us saying (is) … this is not just a school problem," Marquez Kiyama said during a Sept. 23 interview prior to the report’s Oct. 14 release. "It’s a community problem we all have to address and take accountability for. "

Between November 2009 and April 2010, the research team conducted a series of focus groups with 42 parents/family members and 96 current and former students, explained Marquez Kiyama. Additionally, the team studied data from the state education department on students from all ethnic groups at the middle- and high-school levels. The information could be broken down by gender, grade-point average, course work, and credits accumulated as well as when students drop out and the reasons for dropping out, said Harris.

"We wanted to find out how students were progressing over time," she added.

What they discovered is that a multitude of factors, most not surprising, cause students to drop out, the professors said during the interview.

The report also covers student transitions and how, for Latino students, the experience is much more than just moving from one grade to the next, they added.

"One of the things that will come out and we talk about is persistence," said Harris. "Persistence relates to the transition issue. That brings up: What resources do Latino students need in order to effectively transition?"

The report will be released in sections according to theme during various community meetings to allow for discussion and reaction, said Ibero’s president and chief executive officer Hilda Rosario Escher during an interview on Sept. 29. Rosario Escher is part of a 19-member task force — created at the start of the project – that received a preview of the report in September.

"We don’t want the study to sit on a shelf," she said. "We want to give an opportunity for the (Rochester City) School District to react and to work with us as to how we’re going to implement the recommendations. The members of the task force will be very active making sure the … recommendations are carried through."

Speaking Sept. 21 at Ibero’s Jorge Carrion Family Center, RCSD Superintendent Jean-Claude Brizard said he was eagerly awaiting the study results. He made the comment during one in a series of meetings conducted this year to discuss the education of Latinos with parents, students and community members.

From the report data district staff had seen, Brizard said it appeared African-American and Latino students were pretty much on the same track until ninth grade. Then, the "bottom falls out" for Latino students, he said, and school officials have not been able to understand what creates that disparity.

"Something else is going on," Brizard said. "And it couldn’t be (just) academics because they’re in the same rooms with the same teachers."

To address the achievement gap, Brizard added that the district is already looking at other models, including a district in San Antonio, Texas, that has begun to create programs in which community members play a major role in the district.

The study professors said they focused in their initial report on the school and learning factors affecting the drop-out rate. Among these are school safety and violence, courses, classroom policies, suspension policies, and teachers, they said.

"It’s hard to box anything into one particular category because they all extend outside the walls of the schools," Marquez Kiyama said.

In studying student persistence, the team uncovered the influential power of individual mentors and school-based programs — such as ones offered by the Puerto Rican Youth Development and Research Center or the district’s learning institute — and of such community organizations as Ibero, the American Red Cross of Greater Rochester or the Urban League of Rochester. Students who received such support were more likely to think of themselves as future college scholars, they noted.

"These programs heavily influence students’ experiences," remarked Marquez Kiyama. "In terms of persistence factors, they were referenced the most."

Staff and volunteers from these programs helped students find safe places where they could develop their academic identities and that provided sanctuary from whatever difficulties they were experiencing at home or in the community, she added. They also served as resources for college tours and application information.

"Over and over, it was this sense of creating a caring and trusting relationship with them," said Marquez Kiyama. "To use the students’ word: cariño (caring)."

Staff members in such support programs offered a depth of understanding from having similar experiences to sharing cultural knowledge and the students’ native language, added Harris.

"They really need advocates, teachers and counselors who are advocates really understand the multiple things they confront in their lives outside of school," she said.

Teachers who are supportive also hold students to high standards, which is what the superintendent has emphasized in the district strategic plan.

"The teachers who cared were the teachers who pushed them," added Marquez Kiyama. "It suggests that we can and we should be holding our students to high expectations because they will meet them."

A logical recommendation would be to increase student access to school-based and community programs and to increase the accessibility of information about college, which doesn’t have to mean spending more, the professors said. It could mean creating an internship for local college students to create a website that could be constantly updated on college opportunities and to use social-media tools to give parents access to it. That idea came from a parent, said Marquez Kiyama.

Another follow-up plan may include tracking individual students over a number of years as well as having the Warner school present their findings not only locally but around the country as well, added Rosario Escher.

"This is just the beginning," she said.

EDITOR’S NOTE: To see a copy of the report and information on upcoming community presentations, go to www.iaal.org.