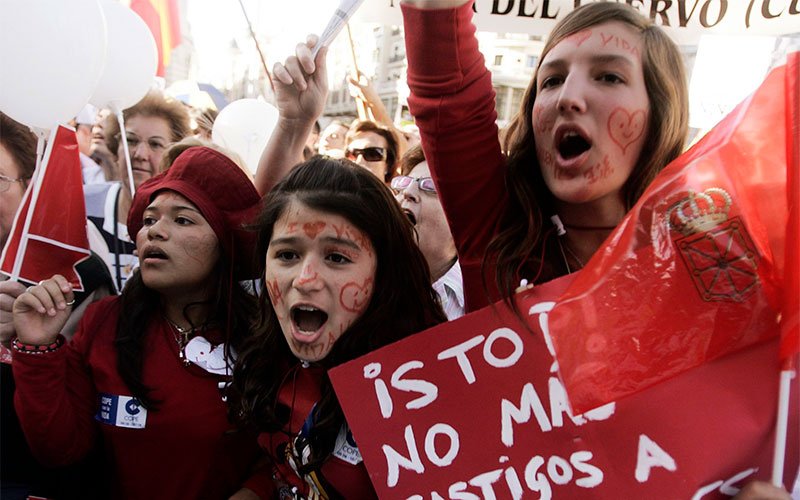 Young pro-life women are pictured in a file photo during a protest against an abortion bill in Madrid. The Spanish bishops' conference has criticized a government-backed draft law that would allow girls 16 or older to obtain abortions without parental knowledge or consent and impose fines and disqualifications for objecting medical staff. (CNS photo by Dani Cardona/Reuters)

MADRID (CNS) — The Spanish bishops’ conference criticized a government-backed draft law that would allow girls 16 or older to obtain abortions without parental knowledge or consent and would impose fines and disqualifications for objecting medical staff.

“Abortion is never a right,” Archbishop Luis Argüello García, the bishops’ secretary-general and spokesman, said in a tweet. “This new abortion law suppresses the prior information and reflection that are essential for making such a serious decision. It is all symptomatic of a way of governing.”

The Spanish government submitted the draft “Organic Law on Sexual and Reproductive Health” Aug. 30 to Spain’s Cortes, or lower house. The bill would scrap a mandatory three-day reflection period for women and the requirement to obtain “information supporting motherhood” and would facilitate access to contraception and sex education. It also would erase abortions from medical records after five years.

Defending the measure Aug. 30, Spanish Equality Minister Irene Montero said it would be “a fundamental measure of democracy” by protecting “rights for half the population.”

The 34-year-old minister predicted the law would be approved by December, along with a government-backed law on LGBT rights, which would allow people over 16 to change their gender in the civil register via a simple court declaration.

Regarding abortion, Archbishop Argüello said Spain could ill afford to “impose a will to power” over “fragile and vulnerable” life.

“In a situation of demographic winter, when advances in science make it possible to say unequivocally that a new life has begun, it’s frankly appalling to propose abortion as a right and try to resolve the ensuing conflicts by annihilating the weakest,” the bishops’ conference secretary-general said in a separate Aug. 30 interview with the Valladolid archdiocesan radio.

Abortion was legalized in Spain in 1985 and made freely available up to 14 weeks in 2010, with terminations allowed up to 22 weeks in cases of “serious risk” to a mother’s “life or health.”

The latest abortion dispute appeared to contradict an Aug. 27 pledge by Félix Bolaños, the minister coordinating government-parliament ties, of a “cordial relationship with the Catholic Church, based on collaboration and dialogue.”

Heading Spain’s official delegation to the elevation of a new Spanish cardinal, Archbishop Fernando Vérgez Alzaga, at a Rome consistory, Bolaños told journalists church and government were “making an effort to get closer and find a balance,” and he predicted agreements were now close on a range of issues “after discreet work and negotiation.”

Catholic campaigners said they would pray outside abortion clinics during a Sept. 10-11 “Days for Life” festival, in defiance of an April law criminalizing the hindering of access “through annoying, offensive, intimidating or coercive acts that undermine a woman’s freedom.”