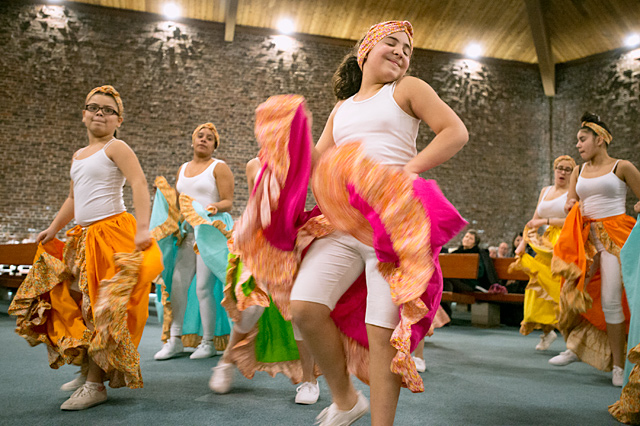 Rochester Committee on Latin America will present White Dove Awards to the Kichwa people of Ecuador for fighting oil companies trying to do business on indigenous territory and the Worker Justice Center of NY and the Worker Center of Central NY for their work on behal of immigrants. Event will also include performance by Afro-Latino Dance.

GATES — The Rochester Committee on Latin America recently honored two organizations working for social justice — one defending the land ownership rights of indigenous people worldwide and the other fighting for the civil rights of immigrants in the United States.

During its 29th-annual Rice & Beans dinner on March 10, ROCLA presented the International White Dove Award to the Kichwa community of Sarayaku, Ecuador, for the Amazonian community’s defense against oil drilling on its land.

“Thanks to them, because they fought, all indigenous people in the Americas and the world have the right to be consulted” about proposals on their lands, said Paola Betchart, who nominated the Kichwa tribe and presented Sarayaku leader Patricia Gualinga with the award. Betchart also translated for Gualinga.

Sarayaku is the first indigenous community to win a case in the Inter-American Court on Human Rights based in Costa Rica, according to information from ROCLA. The 1,200-member tribe won its case in 2012 — a decade after filing suit against Ecuador for approving outside corporations’ exploitation of its land in the Amazon.

Gualinga said she especially appreciates the ROCLA award for its recognition of the entire Kichwa tribe, as the court victory was secured by many of its members.

During the Rochester Committee on Latin America’s annual Rice & Beans dinner March 10, Patricia Gualinga accepts the International White Dove Award on behalf of the Kichwa community of Sarayaku, Ecuador, which has defended its land against oil drilling.

“A successful battle isn’t won by one, two or three people,” she said. “We thought of it as a life-and-death battle. We thank the Rochester Committee for its solidarity with Latin America and for shining a light on the story of a small tribe very far from here in Ecuador’s Amazon (territory).”

During her acceptance speech, Gualinga also said the Kichwa’s long fight included violence against the tribe that was welcomed by the Ecuadorian government. They were even arrested and called terrorists because they were fighting the corporate attempt to drill oil on their lands, she noted.

“When we realized we would not find justice in Ecuador, we turned to … the international system of human rights and the international court,” Gualinga said. “This fight has lasted more than 10 years, on a case in which we have learned a lot on how to communicate with the world, how to defend our own rights and demonstrate to the world with proof that (our rights) were violated.”

The tribe’s court victory, the news of which received applause from the more than 50 people who attended the ROCLA event, was significant for several reasons, she said.

“We fought to inspire other tribes, and we fought so the world would begin to understand that the rights of indigenous peoples should no longer be violated,” Gualinga added.

Helping immigrants who are denied their rights because of being in this country without proper documents is the work of the Worker Justice Center of New York and the Workers’ Center of Central New York, according to Grania Marcus, a ROCLA member who presented the local White Dove Awards to the organizations.

She said soon after moving to the Rochester area six years ago, she met Carly Fox from the Worker Justice Center and Rebecca Fuentes from the Workers’ Center. She quickly realized the great work of both women and their organizations who are fighting on behalf and alongside migrant workers in the Rochester region, she added.

“I aspire to be like them even though I started a little late,” Marcus said.

Fox, who accepted the White Dove Award for the Worker Justice Center, said it was a conversation with Fuentes a couple of years ago that changed the way both did their advocacy work.

Fox said they decided that undocumented workers themselves had to be part of the advocacy.

“We slowed down and really just tried to engage workers and follow their lead as much as possible,” she said.

With this new focus, the groups turned to the region’s $14 billion dairy industry, she added. Workers in Livingston County have since formed a group joining efforts in the Albany area to advocate for driver’s licenses for all workers, as the state now does not accept applications without a Social Security number. That group is helping to form more groups in other counties, Fox said.

“We need to replicate that … and have workers leading a campaign,” Fox said. “It’s just super empowering to have workers engaged.”

Fuentes, who accepted the award for the Workers’ Center, said her organization also has evolved. It went from dealing with crises as they emerged to being more systematic in its approach to organizing workers to ensure their voices are heard. Their voices are ever more important, as immigration detentions have increased under the new president’s administration, she added

“This is a time for courage, not a time to retreat or rest,” Fuentes said.