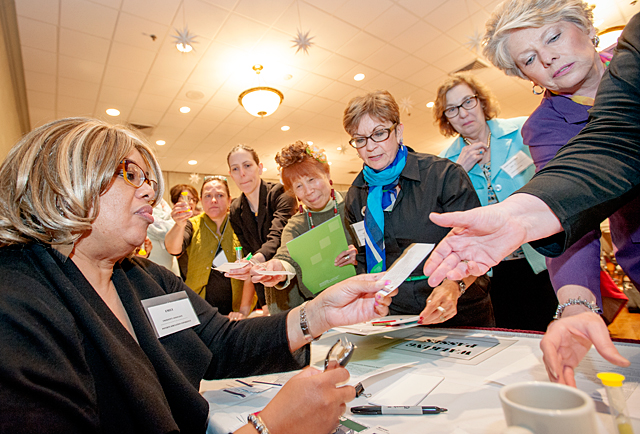 ROCHESTER — The "families" were spread out around the large convention room and represented all sizes and makeups, from nuclear families to single moms with children to a single person.

Each family profile was based on a true scenario. Some of the families rented apartments. Others were homeless. A few had cars, while the rest had to depend on buses for transportation.

The job of the nearly 100 people who participated in the poverty simulation hosted by Finger Lakes Health Systems Agency was to make sure that their "family" was fed, clothed and has its rent paid for a month, explained Rhonda O’Connor from Visions for Change, a Syracuse nonprofit organization that offers long-term poverty solutions. She facilitated the March 26 event at the Radisson Hotel.

The month was broken down into four weeks, with each week broken down into 15-minute segments. During each segment, participants had to figure out how best to use the resources they were given. They learned of their resources and also what roles they would play in their families from information packets they received during registration.

"This is a great way for people to really see what it’s like for people who live in poverty, what they go through and all the barriers they face," said Hilda Rosario Escher, executive director and chief executive officer for Ibero-American Action League. During the simulation, she portrayed a parolee with a baby who faced many challenges in landing a job, she said.

Sister of St. Joseph Christine Wagner (right), executive director of St. Joseph’s Neighborhood Center, plays the role of a minimum wage employer assisting Ellen Sax (left), playing the role of a low-income worker, during a March 26 poverty simulation seminar. The event, which was coordinated by Finger Lakes Health Systems Agency, allowed participants to see the world through the eyes of the poor as they try to access various services.

The FLHSA took the lead on the simulation to also help people understand the connection between poverty and health, explained Wade Norwood, chief program officer.

More than 80 percent of respondents to an FLHSA survey about the simulation noted that the experience had a "significant" or "profound" impact on them personally, said Susan Hagen, the agency’s spokeswoman.

Listening to those in poverty is key

"Think about the stress of living in a lower socioeconomic situation," Norwood said. "The choices people make reflect the choices that they may have."

Having a deeper understanding of the connections between poverty and health — for example, how poor families often may be forced to shop at the corner store that doesn’t carry fresh fruits and vegetables — helps communities work together to help those families, O’Connor said.

But no organization can work as an island and make real change, O’Connor noted. At Visions of Change, a guiding coalition makes sure all groups are at the table to develop initiatives, and that includes individuals directly affected by poverty, she added.

"If we can get the community speaking the same language, working together, we’re going to really help individuals (by) holistically looking at that person," O’Connor said.

She also facilitated a poverty simulation with ACT Rochester after that organization released its poverty report update in January, O’Connor said, and she is planning to conduct another this summer for the United Way of Greater Rochester in connection with the organization’s role in a Rochester anti-poverty initiative.

A community action agency in Missouri first developed these types of simulations several years ago to help front-line workers assisting people in poverty.

"Now, we’re finding out years later, how beneficial it is if you want to make community change," O’Connor said of the simulations. "You really need to know what it (poverty) is really like so you can talk about it at all. … I don’t think you can really develop programs and policies (otherwise)."

During the March 26 simulation, the stress was palpable in the large Radisson ballroom when participants began their second 15-minute segment. All around the room, volunteers manned mock stations representing various agencies and organizations. After a calm start, which O’Connor said is common, the participants got wiser on where they needed to go as soon as they were given the go-ahead. Some made a beeline to the gas station for a gas card; one participant walked away with one while the clerk was distracted. Others headed to the Department of Social Services or the emergency food pantry and tried cutting in line if they were running out of time. Calls for "police" could be heard sporadically from a gas station attendant or the school administrator. The "jail" was usually full.

Realizing they were capable of theft or making threats for the benefit of their family’s survival was eye-opening for many.

And that survival doesn’t depend on "just getting a job," she added. The person then has to learn now to manage funds, get to the job, find affordable child care and obtain health care, organizers said.

But even if a person gets health care, managing his or her health also may fall to the wayside, noted O’Connor.

"If it’s a choice between working and getting a check-up, what are they going to choose?" she said.

Banister, whose role during the simulation was that of a 10-year-old child, also could understand the feeling of trauma that a child living in poverty must experience.

"I missed school to get eyeglasses," she said. "I can’t imagine the stress."

For others, reliving the memories of the poverty they overcame in their lives was painful.

"When you come out of it, you think, ‘I did it. They can do it,’" said Melanie Funchess from the Mental Health Association, who portrayed a school administrator during the simulation. "But people have different resources. There are different rules. … You can lose your job. When you come out of poverty, your biggest fear is going back to it."

The simulation should also help organizations understand the difficult transition people who move from poverty to a better life experience, noted Angelica Pérez, who grew up in the inner city and was a teenage mother.

"I overcame poverty through services in the community," said Pérez, a vice president at The Villa.

But obtaining financial stability meant losing the loyalty of other friends who were in the same struggle of poverty, she said. Others may even resent such success and make a person feel guilty, Pérez added.

"You grieve the sense of who you are," she said. "You have to make it work for you in this new world. … Some people don’t want to leave their world because (doing so) is scary."