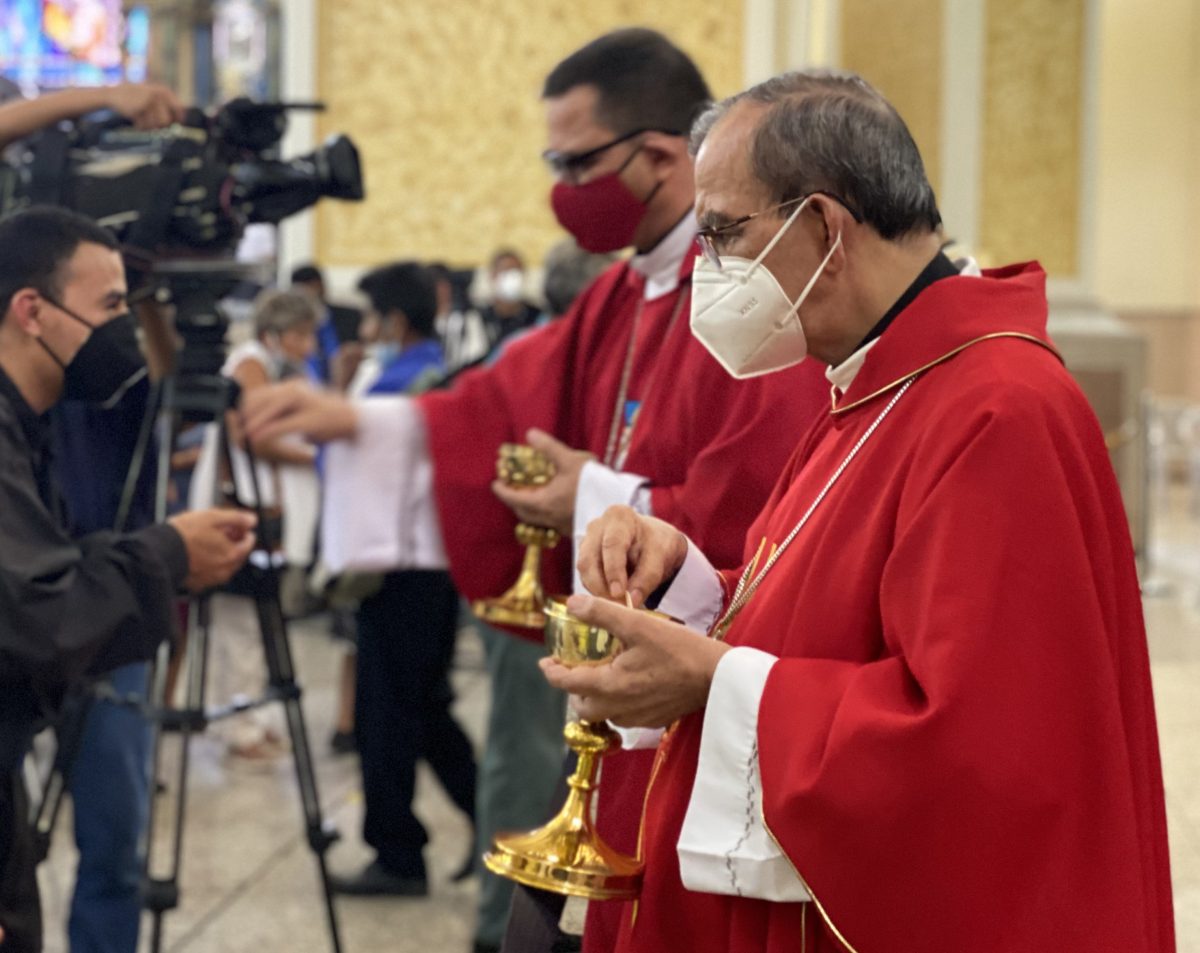 Salvadoran bishops distribute Communion as they celebrate the feast of St. Oscar Romero March 24, 2021, at the cathedral in San Salvador, El Salvador. The bishops said Sept. 12 that making changes without following the constitution and due process would "not benefit our beloved country." (CNS photo by Rhina Guidos)

WASHINGTON (CNS) — Without naming the president, the Salvadoran bishops’ conference criticized an array of actions led by him and his loyalists, from an interpretation of El Salvador’s constitution aimed at allowing his reelection bid to proposals that could legalize abortion, as well as a recent law that turned Bitcoin into legal tender in the country.

“The Salvadoran people — like so many other peoples — yearn to live in a state with rule of law and justice,” said the Sept. 12 statement, titled “Blessed are those who hunger and thirst for justice, for they will be satisfied,” from the Gospel of St. Matthew.

While it’s true that the country long has suffered because of “illegitimate and inappropriate practices” such as corruption, impunity and nepotism, making changes without following the constitution and due process would “not benefit our beloved country,” the bishops said in the statement.

Within hours of taking over the reins of the legislative assembly, lawmakers aligned with Salvadoran President Nayib Bukele and his Nuevas Ideas party voted May 1 to get rid of five of the country’s top judges as well as El Salvador’s attorney general, who was said to be investigating wrongdoing at the top levels of government.

The firings alarmed the international community, and many condemned the move, but there was more to come. Though the country’s constitution limits a president to serve one term of five years, those who replaced the fired judges on the Supreme Court’s Constitutional Chamber — magistrates installed by the president’s political party — threw out the provision in early September. The move opened the door so that Bukele can run again when his term ends in 2024.

The country’s Legislative Assembly, the equivalent of U.S. Congress, also approved a bill Aug. 31 dismissing all judges and prosecutors age 60 or older or who have served for more than 30 years. The bishops’ statement, referencing the dismissal of the judges and the possible presidential reelection, said that while change is necessary, it has to respect the constitution and established processes.

“Although in the actions mentioned above there is a legitimate desire to change the status quo, which for years has hurt the greater majority, it seems to us that changing an unjust system through arbitrary and unconstitutional actions does not contribute to the transformation of the nation,” they said.

Instead, the only change is window dressing, they said.

“That is why we raise our voice, to remind the responsible authorities that these actions can only be valid if they adhere to the constitutional law of the country, because the end does not justify the means,” they said.

They also criticized possible changes to El Salvador’s constitution that have been floated, including a move to legalize abortion and euthanasia in the country.

“Murder will never be legal,” they said, even when you change its name to “dignified death.”

Bukele campaigned by attacking corruption from both political sides, appealing to a populace fed up with promises and little change in socioeconomic conditions as politicians lined their pockets. During the pandemic, he offered $300 in economic relief to some Salvadorans and has regularly sent out food packages to towns and neighborhoods.

Since his election in 2019, Bukele has enjoyed some of the highest approval ratings in Latin America, including wide support from Salvadorans who left the country for economic or other reasons. Many largely have applauded him and his party’s actions — even if the actions seem to skirt the country’s laws.

However, when his loyalists in the Legislative Assembly in June approved, almost overnight, a law making the cryptocurrency Bitcoin legal starting Sept. 7, forcing businesses to accept it as payment, Salvadorans took to the streets to protest, and criticism has been getting louder by the day.

The day the “Bitcoin law” went into effect, the government’s app that Salvadorans were supposed to use could not be downloaded amid technical glitches, and citizens queued up at machines dispensing dollars for Bitcoin to collect $30 the government had given to spend at stores accepting the cryptocurrency. Few were able to collect the cash because of technical difficulties, and as Bitcoin dropped almost 10%, it gave the few Salvadorans who were able to withdraw the money a taste of its volatility.

The bishops said in the statement that amid the “concern and fear” of Bitcoin by Salvadorans, lack of knowledge about it and the “impossibilities in handling a virtual currency, we ask the Legislative Assembly to reform the law.”

In citing their support for democracy and rule of law, the bishops cited documents important in the life of the modern church in Latin America, including the final document of the fifth general conference of the Latin American bishops’ council, known as the Aparecida document.

“There cannot be true and stable democracy without social justice, without real separation of powers, and unless the rule of law is upheld,” they said.

The statement followed a declaration by Salvadoran Cardinal Gregorio Rosa Chavez, who, on Sept. 5, compared the state of democracy in El Salvador to a patient in intensive care, in its final phase before death.